Nothing says “end of the world” like a big fake clock.

The Bulletin of the Atomic Scientists gave its annual Doomsday Clock presentation on Thursday and announced that it’s still two minutes to midnight. Last year, the group of 15 scholars and scientists moved the phony minute hand of fate 30 seconds closer to Armageddon, from two-and-a-half minutes to midnight to its present setting, 11:58 pm sharp. By the Bulletin’s logic, we’re as close to the end as we’ve ever been. The whole thing is adorably retro.

The Doomsday Clock debuted in 1947 and was set at seven minutes to midnight. You could say that one Doomsday Minute is roughly equal to ten years, except the Doomsdayers move the Clock forward and backward depending on what’s going on in the world. So the whole time-running-out thing is symbolically incoherent. And it’s not been the best predictor of emergencies either: In 1960, a year after the Cuban Revolution that brought Fidel Castro to power, the clock added five minutes to the survival time of the human race. Two years later, we had the Cuban Missile Crisis.

The last time the clock was two minutes to midnight was in 1953, at the peak of the Cold War and the nuclear arms race. What’s so scary this time around? “Humanity faces two dire and simultaneous existential threats: nuclear weapons and climate change,” said former California Governor Jerry Brown, executive chair of the Bulletin.

The Doomsday Clock has been suffering from mission creep for years now. Since the end of the Cold War, the people behind the Bulletin have been put in the position of alarmists looking for a fire. And climate change has been working its way to the fore of the Bulletin’s concerns.

The Doomsday folks are upset that the Trump administration pulled out of the Iran nuclear deal and the Paris climate agreement. As we already know, policies that liberals don’t like are certain to cause mass death. The Clock is just reminding us. And for the scaremongers on the left, climate change is the new nuclear war. At least, that’s how it’s talked about. In reality, most Americans are unwilling to spend even $10 dollars a month to ward off the supposed equivalent of nuclear holocaust.

In fairness, if the Doomsday Clock can’t boost its brand in this day and age, then it’s doing it wrong. Then again, with public fear and anxiety already pitched so high, how do elite catastrophists stand out?

The Bulletin should really pace itself. It needs some room to play with here. It’s unlikely that there will be many opportunities to set the clock back while Donald Trump is in office. And the one-minute-to-midnight rollout is going to have to be carefully timed. I’m thinking 2020. But if Trump wins reelection after that, the people behind the Bulletin will really be in trouble. For them, we’ll have survived the end of the world. And wouldn’t that be a terrible problem. 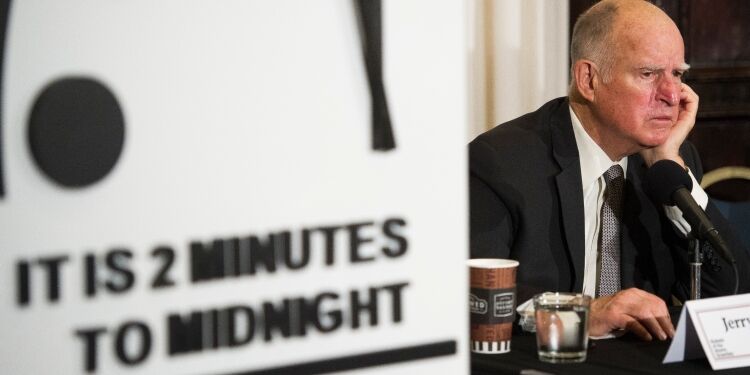