Donald Trump has dramatically raised Americans’ expectations of being entertained by politicians. Whether you’re laughing with him or at him, you’re laughing. Whether you’re shocked or charmed by his outrageousness, you’re moved in some undeniable way by the performance. Some Democrats, namely Rep. Alexandria Ocasio-Cortez, have followed Trump’s lead and invested in their entertainment game. But judging from the first Democratic presidential debate, the standard that Trump has set for political showmanship could be a problem for Democrats in 2020. Not one of the ten candidates on the stage in Miami came close to delivering the thrills, chills, laughs, and gasps of Trump’s one-man show.

It was like watching a silent movie after the advent of talkies. The debaters gave off no spark, no humor, and little emotion. In fact, they seemed more woodenly earnest than candidates were even before the age of Trump. Elizabeth Warren discussed gun deaths as if she were narrating a slideshow. Corey Booker spoke about shootings in his own neighborhood as if he’d read about them.

The instinct among Democrats to be Trump’s polar opposite is understandable, but it fails to take into account that the country has now been consistently stimulated by a sensational political circus for about three years. Americans might have a hard time paying attention to measured tones and customary political cadences—even if what’s being discussed is extreme or radical. It’s why the debate seemed, above all else, lackluster.

Perhaps for the second debate, the other candidates will try not to make the same mistake. Joe Biden’s main message, however, is to return to a pre-Trump, pre-circus political calm. But what if the country is more hooked on outrage than he realizes? It used to be that people sought out entertainment to escape the harshness of real life. But in an age of relative peace, full stomachs, high employment, and technical wonders, we seem to be looking for a little conflict and outrage.

Americans certainly thrill to those who promise to shake things up. Lately, they’ve craved consensus busters such as Trump and Bernie Sanders. And this explains the fact that Rep. Tulsi Gabbard came away from the first debate in a surprisingly strong position. Gabbard is an Assad-regime apologist who seems to think we’ve given the Taliban a bad rap. Her outrageous (and dangerous) positions stirred something in viewers. Gabbard’s name spiked in Internet searches, and she won the Drudge Report’s instant poll.

It’s not surprising that she stood out. However extreme the consensus positions of the Democratic field, they’re instantly made boring once everyone turns them into nearly identical talking points. Gabbard’s twisted worldview represents a further step into the shocking. (There’s also a little showbiz sensibility in her silver striped hair).

There is, of course, much to lament in this. Politics is supposed to be—needs to be—about achieving the common good; it’s not just another entertainment medium. Trump has demonstrated the political value in putting on a good show, but his antics have also cost us something in the way of seriousness. He’s made it so that you never have to stop laughing at him in order to laugh with him. That’s an odd talent, and it’s one that Biden, in his own way, shares with the president. He’s clumsy even in his most winning moments.

Perhaps, despite his call to normalcy, Biden will bring a small dose of amusement to an otherwise drab field. But after the first debate, it’s hard not to think that only Trump himself can deliver on the entertainment expectations that he’s created. 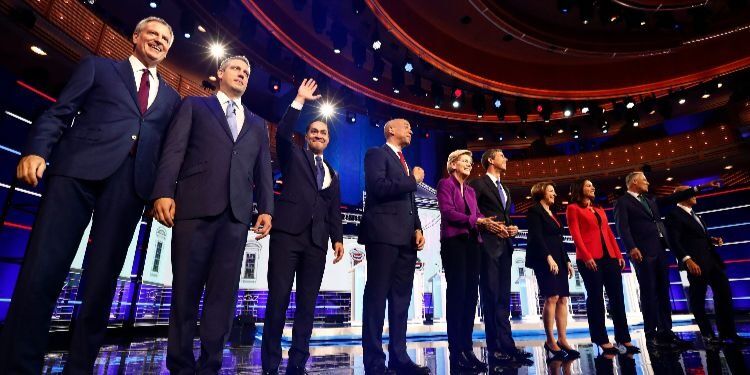