here are going to be disasters and crises for the next president of the United States, as there have been for all the preceding ones. What concerns Tevi Troy, former deputy secretary of the U.S. Department of Health and Human Services and author of Shall We Wake the President, is when and how the commander in chief decides to respond. There really isn’t likely to be that 3 a.m. phone call—a reference to the campaign ad from 2008 that is the meaning behind the title of the book—but there is going to be trouble. 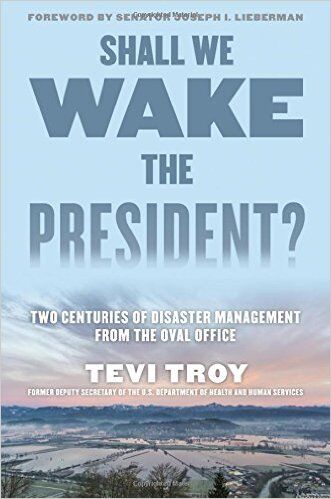 Shall We Wake the President?

Troy, a regular contributor to Commentary, wants to be sure readers understand the nature of crises and in this way find parameters and guidelines to define effective responses. “The president,” Troy explains,

needs to hold the government accountable for maintaining a robust toolkit of available countermeasures to deal with a variety of possible emergencies . . . . The president should also oversee the development of federal government plans to use those tools and have his team practice those plans so that they can be deployed effectively.

Troy knows whereof he speaks. A plan he helped craft for the Bush administration worked well in response to the swine-flu outbreak that threatened Americans just months after Barack Obama had assumed office. As much as he agrees there are more effective and less effective ways of responding to trouble, Troy wants readers to be clear about the limits of presidential and government action. Four million people now work for the federal government, and its sheer size may be rendering it incompetent. “The more that the federal government takes on,” Troy notes, “the less capable it appears to be at handling its core functions.”

Limits to government involvement in the everyday lives of citizens may seem like a quaint notion at present, but Troy provides us with important historical context. He relates a terrific episode of a president distinguishing between the type of disaster or crisis that should be viewed as a public concern and one that is not. In February 1887, Democratic president Grover Cleveland vetoed legislation that would have appropriated money to provide seeds to several drought-stricken counties of Texas. Congress actually had an effective solution to the problem and still the president said no. Why? Because, as Troy quotes Cleveland, he couldn’t find a constitutional basis for such an appropriation and did “not believe that the power and duty of the general government ought to be extended to the relief of individual suffering which is in no manner properly related to the public service or benefit.”

To think that any president in our age would declare an unwillingness to use the levers of government to help relieve a drought or flood because it was not viewed a basic public good is impossible. But Cleveland knew the dangers of government overpromising. As he explained at the time:

Federal aid in such cases encourages the expectation of paternal care on the part of the government and weakens the sturdiness of our national character, while it prevents the indulgence among our people of that kindly sentiment and conduct that strengthens the bonds of a common brotherhood.

In our era, paternal care from the government is more often than not our baseline. For a president to suggest that individual Americans and their neighbors are the ones who need to step up in the face of disasters like floods, droughts, hurricanes, terror, or blackouts is difficult to imagine. But Cleveland was correct to suggest that such links between citizens are important, especially in times of distress. And even today, the experts at the Federal Emergency Management Agency have a similar view. “The brunt of any disaster and the bulk of any recovery effort will fall upon the people,” FEMA says.

Troy agrees as well because he knows that presidents can and do get it wrong when responding to trouble. President Bush’s 2005 flyover of the devastated landscape following Hurricane Katrina was a public-relations calamity that made Bush seem remote, which fit perfectly with the perception of an uncaring, botched federal response to the hurricane. Katrina showed how presidents can misjudge what the people need or want to see in response to disaster. “If our presidents fail us,” Troy warns, “you can and must prepare yourself and your family in case disaster does strike.”

To that end, in this sane, sensible, and essential book, Troy offers some practical advice. He has a checklist for anyone working for the next administration to define crises and how to respond effectively. And he shares some important advice for individuals about how to be prepared. “Resilience is what keeps things going in the face of challenges,” Troy declares. Know your neighbors and have some kind of backup power—a generator or a store of batteries, Troy says. And spend some time getting ready by gathering information, remaining alert, and preemptively organizing with your family, friends, and neighbors where to meet in times of emergency and when cellphone service may be unavailable.

The advantage you gain from these actions isn’t simply about disaster preparedness, but better living within your community. We all need a physical community, especially in times of stress and difficulty. But we ought to remember that those “bonds of common brotherhood” that President Cleveland rightly valued, don’t just happen, those relationships must be tended over time.

As someone who dedicated himself to public service during the Bush administration, Troy wants the federal government and the president to succeed in mitigating the harm from disasters. But Troy also knows that even when a president gets it right, the people remain at risk. “The level of individual preparedness in this country is far from adequate, and smart Americans need to do more to prepare themselves for realistic future disasters. Part of this preparation is recognizing that the federal government may not be there to bail you out when things are going poorly.”