This will be my last Washington Commentary. I’ve written a column about Washington, off and on, here and there, since 1986, when I stole the pen name George Jean Nathan from a long-forgotten theater critic and gathered material for a monthly page in the back of the American Spectator. The Spectator was still published on paper in that backward-looking era. It was tabloid-sized, and the pages were large, and the task of filling one of them every 30 days with amusing anecdotes, small-scale profiles, and fresh information was daunting—and sometimes, for me, impossible. There were months when, even after I spent a couple weeks scratching around, the column didn’t appear at all. Other months, my pen name and I filled the page with items that I enjoyed but that my editors, I feared, considered trivial.

These were the days of High Reaganism, and there was world-historical stuff going on in the city. The Cold War was reaching its climax, and the conservative movement was united in the belief that its idol, Ronald Reagan, had gone soft on the commies; some in the ranks whispered darkly that the old boy might even have gone full comsymp. Reagan himself was beleaguered, and clearly baffled, by the unfolding scandal we now know as Iran Contra, whose tangled tentacles make the exciting Trump-Russia collusion story look as simple as a Nancy Drew mystery. (In the end all our gibbering about Iran Contra came to not-very-much; a similar fate may befall the hopes for Russian collusion.) At home, Reagan had engineered a reorientation of the federal tax code that touched off a 20-year boom, and a year later, in 1987, the stock market took a plunge that many analysts in Washington told us marked the onset of a new Depression.

I got some of this heady stew into the column. I watched the fabulist Oliver North testify at the Iran Contra hearings and later sat with sagging spirits in the East Room of the White House while Reagan, then as now my choice for Favorite President Ever, stumbled his way through a press conference on the scandal. I tailed Mikhail Gorbachev when he came to town on a state visit and filled my reporter’s notebook with sketches of the birthmark on his forehead. I spent a morning with Robert Byrd, former kleagle of the KKK whose fellow Democrats had recently rewarded with the position of Senate majority leader, and watched him push through an arms-control treaty that delighted Reagan and appalled conservative Republicans. Mostly, though, the great events of the day passed George Jean Nathan by.

Instead I was thrilled to introduce readers to the American Museum of the Potato in a tumbledown townhouse on Capitol Hill. Its curator described himself, on the record, as the “Voice of the Potato.” (He looked the part, too.) I spent an evening in a saloon off of M Street NE—crack alley in those days—chatting up the winner of the Strongest Man in the World competition; he spoke breathlessly as he balanced a barbell with a cocktail waitress perched on either end. A lady in a leopard print leotard held my hand on the National Mall one afternoon while we joined in a protest called “Hands Across America.” The protest was meant to end homelessness once and for all. It didn’t work, obviously, but for several hours I thought I was in love. I gathered with a band of angry feminists for an early-morning raid on a porn shop downtown; this was before porn was domesticated by the personal computer. Through a terrible mix-up, I got myself filmed by a news crew as I thumbed through a pornographic comic book. That night on the local news I appeared unidentified in the role of startled pervert, and the woman I was dating dropped me like a hot brick. I never told her about the leotard lady.

If you’d read me as George Jean Nathan, in other words, Washington would have appeared less as a stage for great drama than a rather charming village of oddballs and cranks—less Seven Days in May, more Local Hero. And so it went in the years that followed, as I hopped from one publication to another with the job of writing about Our Nation’s Capitol. This obsession with the orthogonal—with what one editor dismissed as “off-news”—marked a defect in me as a Washington columnist. I approached the meat’n’taters of political journalism warily, if at all; the weekly Crisis of the Century that immolated the scalp of so many of my colleagues held no attraction. They say one difference between a dog and a human being is that, if you raise your hand to point at something, the man will look where you’re pointing and the dog will look at your hand. As a reporter, I’ve been with the dogs.

Things began to change when Bill Clinton moved to Washington. The oddballs and cranks took on a sharper edge, though they were no less odd or cranky. Clinton’s long history of prevarication and shady dealings in Arkansas provided just enough material for his enemies to build elaborate fantasies of evil in the White House. One morning in the early months of the administration, Clinton’s old friend and deputy counsel, Vincent Foster, drove across the river to a Virginia park and shot himself. Overnight the suicide became a cottage industry for the loonier of Clinton’s opponents—not only an endless source of conspiracy mongering but of fundraising, too. Foster’s death, which seemed straightforward and terribly sad, interested me not at all, but I spent an afternoon with some of the conspiracists in their headquarters in a Fairfax County strip mall. They buried me in stacks of Xeroxed court records, depositions, and even ballistics reports altogether unrelated to the suicide. The bottom line, one of their connections explained to me a couple weeks later, was that the suicide had been the work of “three Israeli professors.” The evidence was thin.

The goofball charm that could still be found in Washington began to look less charming. Historians may differ, but I think this was the beginning of Washington’s tilt toward what we’ve been trained to call “bitter partisanship.” (The savaging of the Supreme Court nominees Robert Bork and Clarence Thomas make good starting points, too.) The revenue that poured into Washington from a booming economy was spent just as quickly, by the government and by billowing ranks of what once were called “Beltway bandits.” In Washington, clashes between interests are frequently a matter of ideology, of course, but now they’re a matter of business even more so: There’s gold, and lots of it, in them thar partisan disputes. The stakes may not be higher, but they’re more immediate and material, and you can see it in the humorlessness and glum formality of our politics and our politicians. Sometimes I even miss ole Bobby Byrd.

In the meantime, the city that Nathan knew slowly vanished, swamped in money. The riches showed in the demolition of old neighborhoods, downtown and elsewhere, and their replacement by boxy office buildings wrapped in ribbon windows and, lately, block after block of luxury apartments outfitted with roof-deck swimming pools and climbing walls. As a result, the city is safer, more comfortable, more abundant, and far less interesting. Not long ago I passed by the sight of Al’s Magic Shop—a cobwebby, cluttered gag store I wrote about a couple times. I saw George H.W. Bush at Al’s one day back in the eighties, when he was still vice president. As his Secret Service detail stood watchfully by, Bush loaded up on hand-buzzers, whoopee cushions, and fake vomit. He was a notorious gag guy.

Al’s is now a bistro offering Asian fusion cuisine, and our current vice president, a perfect embodiment of our current capital, is not a gag guy, as you may have guessed. Washington was once a place where the vice president knew the value of a whoopee cushion. 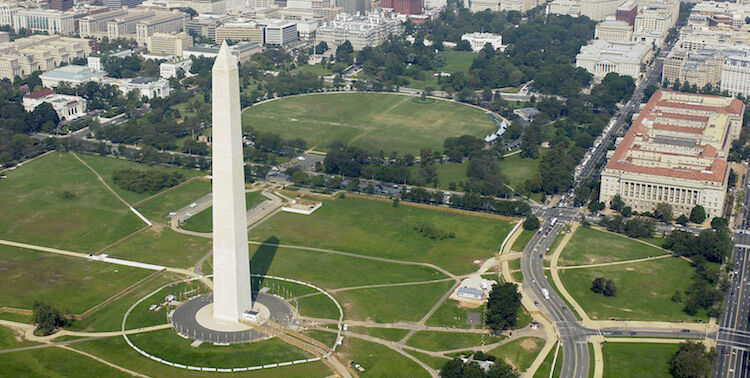