l Franken took to the Senate floor on Pearl Harbor Day—the day of his personal infamy. He went there to resign his Senate seat, and he did, but the theme of his resignation speech was that, under the circumstances, he’d be crazy to resign. As he plugged along, all the Franken mannerisms were on full display: the halting delivery, as if he were seeing the words of his text for the first time; the smug tone; the clichés about passion and commitment; the pointless allusions; and most of all, the condescension that seems woven into him, from which it seems he can never escape.

Not that he tries. What was remarkable about the condescension in this instance was that Franken directed it at women who accused him of behaving “inappropriately” toward them. (In an era of strictly enforced relativism, we struggle to find our footing in judging misbehavior, so we borrow words from the prissy language of etiquette. The mildest and most common rebuke is unfortunate, followed by the slightly more serious inappropriate, followed by the ultimate reproach: unacceptable, which, depending on the context, can include both attempted rape and blowing your nose into your dinner napkin.) Franken’s inappropriateness entailed, so to speak, squeezing the bottoms of complete strangers, and cupping the occasional breast.

Franken himself did not use the word “inappropriate.” By his account, he had done nothing to earn the title. His earlier vague denials of the allegations, he told his fellow senators, “gave some people the false impression that I was admitting to doing things that, in fact, I haven’t done.” How could he have confused people about such an important matter? Doggone it, it’s that damn sensitivity of his. The nation was beginning a conversation about sexual harassment—squeezing strangers’ bottoms, stuff like that—and “I wanted to be respectful of that broader conversation because all women deserve to be heard and their experiences taken seriously.”

Well, not all women. The women with those bottoms and breasts he supposedly manhandled, for example—their experiences don’t deserve to be taken seriously. We’ve got Al’s word on it. “Some of the allegations against me are not true,” he said. “Others, I remember very differently.” His accusers, in other words, fall into one of two camps: the liars and the befuddled. You know how women can be sometimes. It might be a hormonal thing.

But enough about them, Al seemed to be saying: Let’s get back to Al. “I know the work I’ve been able to do has improved people’s lives,” Franken said, but he didn’t want to get into any specifics. “I have used my power to be a champion of women.” He has faith in his “proud legacy of progressive advocacy.” He’s been passionate and worked hard—not for himself, mind you, but for his home state of Minnesota, by which he’s “blown away.” And yes, he would get tired or discouraged or frustrated once in a while. But then that big heart of his would well up: “I would think about the people I was doing this for, and it would get me back on my feet.” Franken recently published a book about himself: Giant of the Senate. I had assumed the title was ironic. Now I’m not sure.

Yet even in his flights of self-love, the problem that has ever attended Senator Franken was still there. You can’t take him seriously. He looks as though God made him to be a figure of fun. Try as he might, his aspect is that of a man who is going to try to make you laugh, and who is built for that purpose and no other—a close cousin to Bert Lahr or Chris Farley. And for years, of course, that’s the part he played in public life, as a writer and performer on Saturday Night Live. When he announced nine years ago that he would return to Minnesota and run for the Senate—when he came out of the closet and tried to present himself as a man of substance—the effect was so disorienting that I, and probably many others, never quite recovered. As a comedian-turned-politician, he was no longer the one and could never quite become the other.

The chubby cheeks and the perpetual pucker, the slightly crossed eyes behind Coke-bottle glasses, the rounded, diminutive torso straining to stay upright under the weight of an enormous head—he was the very picture of Comedy Boy, and suddenly he wanted to be something else: Politics Boy. I have never seen the famously tasteless tearjerker The Day the Clown Cried, in which Jerry Lewis stars as a circus clown imprisoned in a Nazi death camp, but I’m sure watching it would be a lot like watching the ex-funnyman Franken deliver a speech about farm price supports.

Then he came to Washington and slipped right into place. His career is testament to a dreary fact of life here: Taken in the mass, senators are pretty much interchangeable. Party discipline determines nearly every vote they cast. Only at the margins is one Democrat or Republican different in a practical sense from another Democrat or Republican. Some of us held out hope, despite the premonitory evidence, that Franken might use his professional gifts in service of his new job. Yet so desperate was he to be taken seriously that he quickly passed serious and swung straight into obnoxious. It was a natural fit. In no time at all, he mastered the senatorial art of asking pointless or showy questions in committee hearings, looming from his riser over fumbling witnesses and hollering “Answer the question!” when they didn’t respond properly.

It’s not hard to be a good senator, if you have the kind of personality that frees you to simulate chumminess with people you scarcely know or have never met and will probably never see again. There’s not much to it. A senator has a huge staff to satisfy his every need. There are experts to give him brief, personal tutorials on any subject he will be asked about, writers to write his questions for his committee hearings and an occasional op-ed if an idea strikes him, staffers to arrange his travel and drive him here or there, political aides to guard his reputation with the folks back home, press aides to regulate his dealings with reporters, and legislative aides to write the bills should he ever want to introduce any. The rest is show biz.

Oddly, Franken was at his worst precisely when he was handling the show-biz aspects of his job. While his inquisitions in committee hearings often showed the obligatory ferocity and indignation, he could also appear baffled and aimless.  His speeches weren’t much good, and he didn’t deliver them well. As if to prove the point, he published a collection of them earlier this year, Speaking Franken. Until Pearl Harbor, he’d been showing signs of wanting to run for president. Liberal pundits were talking him up as a national candidate. Speaking Franken was likely intended to do for him what Profiles in Courage did for John Kennedy, another middling senator with presidential longings. Unfortunately for Franken, Ted Sorensen is still dead.

The final question raised by Franken’s resignation is why so many fellow Democrats urged him to give up his seat so suddenly, once his last accuser came forward. The consensus view involved Roy Moore, in those dark days when he was favored to win Alabama’s special election. With the impending arrival of an accused pedophile on the Republican side of the aisle, Democrats didn’t want an accused sexual harasser in their own ranks to deflect what promised to be a relentless focus on the GOP’s newest senator. This is bad news for any legacy Franken once hoped for himself. None of his work as a senator will commend him to history. He will be remembered instead for two things: as a minor TV star, and as Roy Moore’s oldest victim. 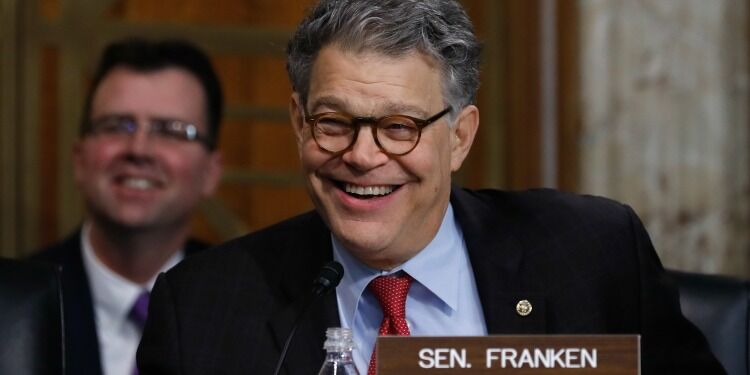