t’s been a long time since I’ve watched people succumb to the McCain Swoon, that starry-eyed suspension of critical judgment that overcomes someone—often a journalist—when he encounters Senator John McCain. I was happy to see it bloom again this summer. All sorts of people fell into the Swoon, though different people were swooning at different times and, as always with the quicksilver McCain, for different reasons. Some people, in fact, had to un-Swoon their previous Swoon so fast they risked spinal damage.

The Swoon has several symptoms: extreme praise, a disinclination to absorb contrary facts, a weakness for adulation, and a willingness to project one’s own beliefs and dispositions onto an ill-suited target, regardless of evidence. The first thing to know about the Swoon, though, is that it is well rooted in reality. John McCain is perhaps the most interesting non-presidential figure in Washington politics since Daniel Patrick Moynihan. Any piece of journalism that aims to assess him objectively should be required to include, as a stipulation, a passage like this one from Robert Timberg’s masterful book about Vietnam, The Nightingale’s Song.

The [chief jailer] gleefully led the charge as the guards, at [another guard’s] command, drove fists and knees and boots into McCain. Amid laughter and muttered oaths, he was slammed from one guard to another, bounced from wall to wall, knocked down, kicked, dragged to his feet, knocked back down, punched again and again in the face. When the beating was over, he lay on the floor, bloody, arms and legs throbbing, ribs cracked, several teeth broken off at the gum line.

“Are you ready to confess your crimes?” asked [the guard].

This scene is, of course, from McCain’s five years in a North Vietnamese prisoner of war camp. It helps to know that before this gruesome episode began—there were many more to come—McCain’s arms had been broken and gone untreated. It helps, too, to know that the point of the torture was to force McCain to leave the prison and return home to his father, the highest ranking naval officer in the Pacific. In other words, they hung him by his broken arms because he refused to let them let him go.

Every reporter who’s done his homework knows this about McCain, and most civilians who meet him know it, too. This is the predicate for the Swoon. It began to afflict liberal journalists of the Boomer generation during the warm-up to his first run for president, against Governor George W. Bush, in the late 1990s. The reporter would be brought onto McCain’s campaign bus and receive a mock-gruff welcome from the candidate. No nervous handlers would be in evidence, like those who ever attend other candidates during interviews.

And then it happens: In casual, preliminary conversation, McCain makes an indiscreet comment about a Senate colleague. “Is that off the record?” the reporter asks, and McCain waves his hand: “It’s the truth, isn’t it?” In a minute or two, the candidate, a former fighter pilot, drops the F bomb. Then, on another subject, he makes an offhanded reference to being “in prison.” The reporter, who went through four deferments in the late 1960s smoking weed with half-naked co-eds at an Ivy League school, feels the hot, familiar surge of guilt. As the interview winds down, the reporter sees an unexpected and semi-obscure literary work—the collected short stories of William Maxwell, let’s say—that McCain keeps handy for casual reading.

By the time he’s shown off the bus—after McCain has complimented a forgotten column the reporter wrote two years ago—the man is a goner. If I saw it once in my years writing about McCain, I saw it a dozen times. (I saw it happen to me!) Soon the magazine feature appears, with a headline like “The Warrior,” or “A Question of Honor,” or even “John McCain Walks on Water.” Those are all real headlines from his first presidential campaign. This really got printed, too: “It is a perilous thing, this act of faith in a faithless time—perilous for McCain and perilous for the people who have come to him, who must realize the constant risk that, sometimes, God turns out to be just a thunderstorm, and the gold just stones agleam in the sun.”

Judging from inquiries I’ve made over the years, the only person who knows what that sentence means is the writer of it, an employee of Esquire magazine named Charles Pierce. No liberal journalist got the Swoon worse than Pierce, and no one was left with a bitterer hangover when it emerged that McCain was, in nearly every respect, a conventionally conservative, generally loyal Republican—with complications, of course. The early Swooners had mistaken those complications (support for campaign-finance reform, for example, and his willingness to strike back at evangelical bullies like Jerry Falwell Sr.) as the essence of McCain. When events proved this not to be so, culminating in his dreary turn as the 2008 Republican presidential nominee—when he committed the ultimate crime in liberal eyes, midwifing the national career of Sarah Palin—it was only Republicans who were left to swoon.

So matters rested until this July, when McCain released the news that he suffers from a particularly aggressive form of brain cancer. Many appropriate encomiums rolled in, some from the original Swooners. But another complication arose. Desperate to pass a “motion to proceed” so that a vote could be taken on a lame and toothless “repeal” of Obamacare, Senate Republicans could muster only a tie vote. McCain announced he would rise from his hospital bed and fly to Washington to break the tie and vote for the motion to proceed.

Even conservatives who had long remained resistant to the Swoon succumbed. Even Donald Trump tweet-hailed McCain as a returning hero. His old fans from the left, those with long memories, wrote, or tweeted, more in sorrow than in anger. Over at Esquire, poor Charles Peirce reaffirmed that God had turned out to be just a thunderstorm again. “The ugliest thing to witness on a very ugly day in the United States Senate,” he wrote, “was what John McCain did to what was left of his legacy as a national figure.” A longtime Swooner in the Atlantic: “Senator McCain gave us a clearer idea of who he is and what he stands for.” Answers: a hypocrite, and nothing!

The old fans weren’t mollified by a speech McCain made after his vote, in which he sounded notes they had once thrilled to—he praised bipartisanship and cooperation across the aisle. Several critics in the press dismissed the speech with the same accusation that his conservative enemies had always leveled at McCain when he committed something moderate. He was pandering…to them! “McCain so dearly wants the press to think better of him for [this] speech,” wrote the ex-fan in the Atlantic. But the former Swooners were having none of it. Swoon me once, shame on me. Swoon me twice . . .

Then the next day in the wee hours, McCain voted against the actual bill to repeal Obamacare. Democrats were elated, and Republicans were forced to halt in mid-Swoon. His reasons for voting as he did were sound enough, but reasons seldom enter in when people are in thrall to their image of McCain. The people who had once loved him so, and who had suffered so cruelly in disappointment, were once more in love. Let’s let Pierce have the last word: “The John McCain the country had been waiting for finally showed up early Friday morning.” He had done what they wanted him to do; why he had done it was immaterial.

The condescension is breathtaking. Sometimes I think McCain is the most misunderstood man in Washington. True enough, he’s hard to pin down. He’s a screen onto which the city’s ideologues and party hacks project their own hopes and forebodings. Now, as he wages another battle in a long and eventful life, what he deserves from us is something simpler—not a swoon but a salute, offered humbly, with much reverence, affection, and gratitude. 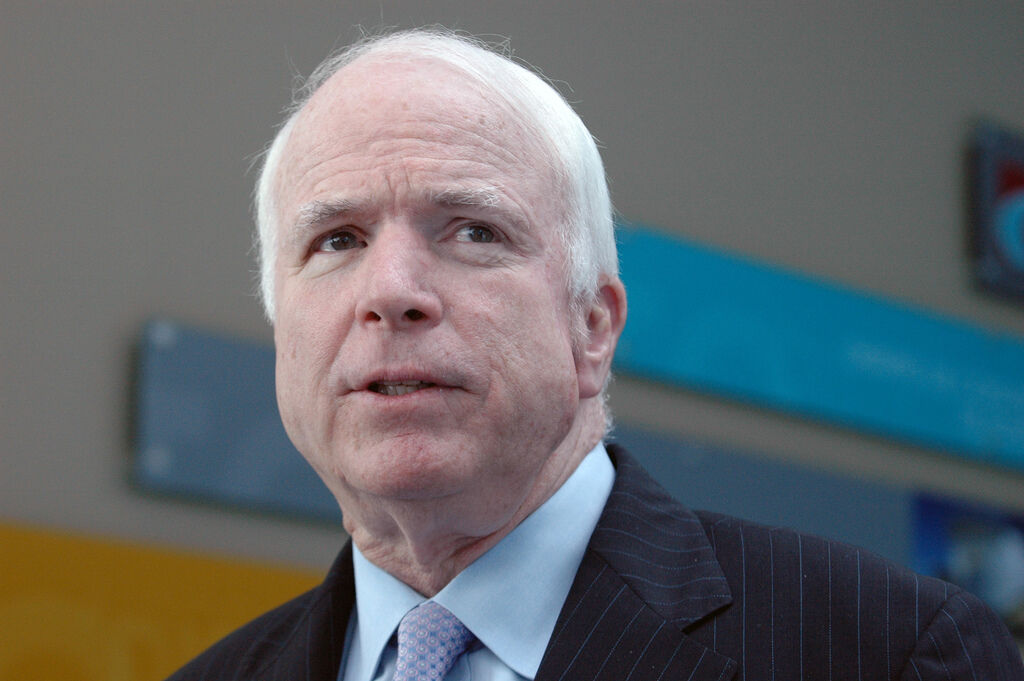