or a brief, surreal moment last month, all of Washington was divided by something other than Donald Trump: Was Vice President Mike Pence a sex machine or a hunka-hunka-burnin’ love? A repressed religious nut, a sexist pig, or a civil-rights criminal? Or worse, was he the 21st-century version of General Jack D. Ripper, the unhinged base commander in Dr. Strangelove, whose complicated attitudes toward women compel him to start World War 3?

“Women sense my power,” General Ripper tells fellow officer Mandrake, “and they seek my life essence. I do not avoid women, Mandrake, but I do deny them my essence.”

I admit it’s unlikely that many of the bright young things of Washington journalism know about General Ripper. Dr. Strangelove was released in 1964, long before most of them were born, and their knowledge of events from way back then is not encyclopedic, or even Wikipedic. (They do know about the Stonewall riots and Rosa Parks.) They were alarmed and repulsed nonetheless by a profile of Pence’s wife, Karen, published in the Washington Post at the end of March. Mrs. Pence declined to be interviewed for the story, but the Post reporter, undeterred, did a Nexis database search to fill in the blanks. (This is more industrious than it sounds; in the Trump era, many Post stories take flight on nothing more reportorial than a journalist’s hostility toward his subject.) The reporter uncovered a 15-year-old interview with Mike Pence and informed us: “In 2002, Mike Pence told the Hill that he never eats alone with a woman other than his wife and that he won’t attend events featuring alcohol without her by his side, either.”

For Democrats and liberals, mainstream journalists included, this revelation overwhelmed the rest of the profile. Everything around it faded from view. This in itself is too bad, because the Post story held some genuine interest, especially for those of us who have never given a thought to Mrs. Pence. The portrait that emerged was of a devoted wife and a loyal and generous friend, a former elementary-school teacher who dabbles in watercolors and whose social circle comes not from politics but from her church and her children’s old playgroups. Ordinarily the sheer Midwestern normality of it all would have generated a few sniggers from Post readers if it weren’t for the supernova revelation: Mike Pence won’t go to dinner with any women but his wife!

What followed was much more than a condescending snigger or two. “Social media exploded” has become a cliché on the order of “it rained buckets” or “he went ballistic,” because social media, at least in the hands of political journalists, is always exploding over one triviality or another. But you really had to be there to see the foaming stew of outrage that this bit of news provoked.

It was of course the slight overhang of sex that made the news go kaboom. The subject of politics and sex is an old story, and always interesting—more interesting certainly than the subject of politics alone, although much less interesting than the subject of sex all by itself. And despite the (true) adage that politics is show biz for homely people, Washington has amassed an impressive amount of sexual folklore. In the 1980s, I used to meet with a dinner group on the second floor of a Capitol Hill restaurant, next to a small dining room where a bus boy had once discovered Edward M. Kennedy rolling around, partially unclothed, underneath the table. (There had been a female lobbyist present, too.) Political junkies and other interested parties would often ask to see the hallowed room, glancing in with abashed reverence, as though getting a glimpse into the Queen’s loo.

A few blocks away, in a suite of senators-only rooms in the Capitol, the fireplace mantel held what was called the “Strom Thurmond bat,” in honor of the famously randy senator from South Carolina, then entering his 10th decade. The bat, a senator once explained to me, was to be used after the old satyr’s death to beat down his—how to put it?—hardened member of Congress so the coffin lid could be shut.

Sex is not the first thing one thinks of when one thinks of Mike Pence—I feel safe in speaking for all of us here—but Washington’s sordid reputation was surely part of what led him to lay down his rule when he first moved to D.C. as a pious congressman. A man has to know his limitations, and maybe Pence knows his. But the picture of a frisky Evangelical vice president should have caused tittering rather than a social-media explosion. The few attempts at humor fell with the gossamer touch of a blacksmith at his anvil. “Can’t our vice president keep it in his pants?” joked the sophisticated Stephen Colbert. Oh, be-have!

In place of naughty jokes—the funny kind—there was outrage. It was well-summarized by the editor of Mother Jones, who unspooled a tweet in 10 parts, which in Twitter terms makes it the Iliad.  “I don’t know/care if Pences have weird hangups,” she tweeted generously. “I do care if women are being denied jobs and opportunities, and that some normalize this . . . . If Pence won’t eat dinner alone with any woman but his wife, that means he won’t hire women in key spots.” It was left to others to point out that Pence has hired plenty of women in “key spots,” including his national-security adviser and his deputy chief of staff, and he chose a certified woman to run as his lieutenant governor in his Indiana gubernatorial campaign.

Still, the theme of gender discrimination was picked up by other scribblers. It once seemed a stretch to link the far-left Mother Jones, with its class, race, ’n’ gender obsessions, to the mainstream liberal media, but not any more. The bright young things have all drunk deep from the same well. The reaction of another Post writer was typical: “There’s a deeply troubling worldview at work here, one that has profound implications for policy, and we’re already seeing it play out at both the state and federal levels.”

To quote our quotable president: Sad! In progressive Washington, sex is no longer about sex, no longer about stubborn erections and priapic public servants bare-bottomed on a restaurant floor. No: it’s about public policy. Old Strom must be rolling over in his grave, if it’s not too uncomfortable. The Post writer went on to list several state initiatives that limit the availability of abortions. The cluster of sexual issues—abortion and homosexuality, sexism and transgender rights—now seems to be the only thing that can get liberal hearts started in the morning, and rare is the subject that won’t call them to mind. Mike Pence decides not to go out to dinner with someone, and suddenly everybody’s talking about abortion. The logic is obscure to the nonprogressive mind.

Indeed, the nonprogressive reaction to the Pence marital arrangements seemed to be: “Is this really anybody’s business but theirs?” The definitive answer was supplied by a painfully earnest website called Vox, which published an article under the headline “Vice President Pence’s ‘never dine alone with a woman’ rule isn’t honorable. It’s probably illegal.” The author was, what else, a trial lawyer. She opened her article by recalling a boorish comment made by a male colleague at lunch one day. “Everyone laughed and went back to eating,” she wrote. “But this is no laughing matter . . . ”

She went on to cite Title VII of the Civil Rights Act and—here’s the bad news—actually made a compelling case that the Pence’s marital arrangements aren’t their own business after all. “The practice described by Pence in that 2002 interview is clearly illegal when practiced by a boss in an employment setting,” she wrote, “and deeply damaging to women’s employment opportunities.”

Seldom has a document rendered the progressive project with such clarity. The unstated ambition is to bring as many private interactions as possible to the attention of government and, if they are sufficiently at odds with progressive sensibilities, to proclaim them a violation of federal law. And off to the courthouse the tumbrils will take us, passing under the arch where our new national motto is etched: This is no laughing matter. 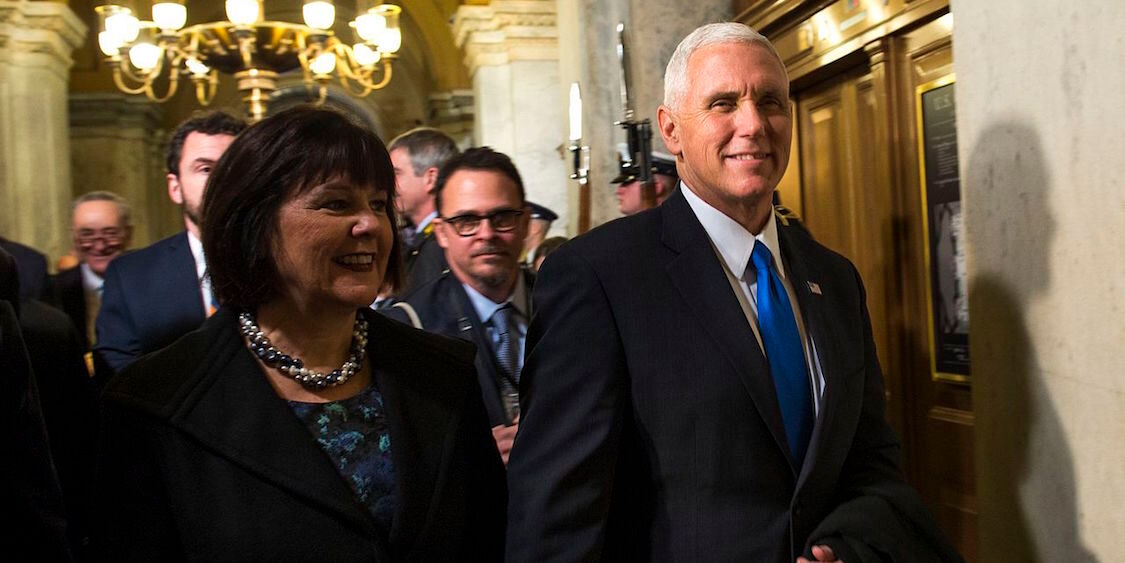