n mid-October, after the revelation that Donald Trump had bragged about his compulsion to make unwanted physical advances on women, a Wisconsinite named Marybeth Glenn took to social media and published a “tweetstorm,” a series of 17 Twitter entries, that encapsulate and personify a little-noted aspect of the existential crisis into which the Donald Trump candidacy has plunged the Republican Party and the conservative movement.

Glenn specifically mentions having worked to help her governor, Scott Walker, survive a recall and having labored for Marco Rubio’s presidential campaign. Then came 2016: “Now some Trojan horse nationalist sexual predator invades the GOP, eating it alive, and you cowards sit this one out? He treats women like dogs, and you go against everything I—and other female conservatives—said you were and back down like cowards.”

Because she does not want this to be a victim’s manifesto, Glenn instantly turns the tables on the politicians she’s attacking for failing to protect her and people like her: “We don’t need you to stand up for us, you needed to stand up for us for you. For your dignity. For your reputation. [Senator] Jeff Sessions says that he wouldn’t ‘characterize’ Trump’s unauthorized groping of women as ‘assault.’ Are you kidding me?!  Others try to rebuke his comments, yet still choose to vote for a sexual predator—because let’s be honest, that’s what he is.”

And then she exits the Republican Party, or at least any kind of grassroots activism on its behalf: “I’m just one woman, you won’t even notice my lack of presence at rallies, fair booths, etc. You won’t really care that I’m offended by your silence, and your inability to take a stand. But one by one you’ll watch more women like me go, and you’ll watch men of actual character follow us out the door. And what you’ll be left with are the corrupt masses that foam at the mouth every time you step outside the lines. Men who truly see women as lesser beings, and women without self-respect. And your ‘guiding faith’ and ‘principles’ will be attached to them as well.”

It is not just the Republican Party but the conservative movement that has alienated her: “Various men in  the movement are writing it off as normal, confirming every stereotype the left has thrown at them. So I’m done…. And when it’s all said and done, all you’ll have left is the party The Left always accused you of being.”

Glenn’s astonishing essay in Tweet form, some of which I’ve compressed and rearranged here, was read by more than 3 million people over the space of three days. It’s impossible to know how many of them share her ideological perspective. Plenty didn’t, of course, and were just hitting the “like” button as their way of dancing merrily around the right-wing funeral pyre (which would account for the praise Glenn received from the leftish J.K. Rowling, among others). But certainly enough of Glenn’s true compatriots liked these Tweets and shared them to suggest she was speaking for this year’s truly forgotten voter: the Republicans and conservatives who are dismayed, horrified, dispirited, and devastated by Trump’s hostile takeover of the GOP.

From the moment Trump came gliding down that gilded escalator in June 2015, we’ve been told that he was harnessing a forgotten voter—the white, male working-class voter and the many millions like them who had long ago ceased to vote or who had never started. This voter has been the subject of passionate discussion in and about the Republican Party. The attempt to understand this forgotten voter has become the year’s most pressing sociological challenge. If he had been “forgotten,” he is no longer.

Two of the year’s most provocative books, J.D. Vance’s Hillbilly Elegy and Nicholas Eberstadt’s Men Without Work, are efforts to summarize and crystallize the social and moral dislocation that appears to be afflicting the worst-off of these men. We have learned their incomes have stagnated, they no longer believe they have agency to affect their own circumstances for the better, and that they lose themselves in video gaming and opiates. We are told they feel that Mexicans are taking their jobs, that free trade destroyed their livelihoods, and that the social changes over the past four decades have made them feel like outcasts in their own country.

Campus social-justice warriors may fret over “male privilege,” but the political story of 2016, we’ve been told, is the story of the rise of the disempowered male—the new populist force that must be reckoned with, whether Trump wins or loses, whether it’s close or whether it’s a blowout. The idea of “the forgotten man” is nothing new in American life. It was, of course, a trope of the Great Depression, the subject of the great final number of The Golddiggers of 1933, whose lyrics (by the Communist songwriters E.Y. Harburg and Jay Gorney) condemned the powers-that-be for leaving him out to dry:

You had him cultivate the land

He walked behind the plow

The sweat fell from his brow

But look at him right now

Change “cultivate the land” to “you had him forge your steel,” and you have today’s “forgotten man” updated perfectly.

Well, just as the forgotten man wasn’t forgotten when the song was performed in 1933—indeed, the entirety of the New Deal passed that year, the largest public-works and economic-stimulus program in American history, was designed to aid him—he is far from forgotten in 2016. His presence not only galvanized the primary race, he has served to terrify the Republican Party with his power ever since. Efforts to challenge Trump in the run-up to the Republican convention, to create a delegate fight, to recruit a serious third-party challenger to give Republicans two options on the ballot and thus save down-ticket GOP office-seekers—all these died aborning because of the threat that the “forgotten Trump voter” would take his revenge in some unknown but enduring form.

Even now, we are told that the issues that have motivated the Trump voter must be integrated into the Republican Party agenda even if Trump crashes and burns. The most obvious of these issues involves immigration and border control, which Trump crystallized into his Great Wall of America idea (which, when you come right down to it, is basically just a real-estate developer’s gloss on John McCain’s 2008 demand to “build the dang fence”).

Trump donned conservative garb to further his quest for power in an echo of Richard III: ‘Thus I clothe my own naked villainy with odd old ends stolen out of holy writ and seem a saint…Then I sigh, and with a piece of Scripture tell them that God bids us to do evil for good.’


But taking a hard line on immigration had already become GOP gospel before Trump came down the escalator. Marco Rubio, who had sought immigration reform in 2013, declared his own effort a failure, said he had learned from it, and laid out an immigration agenda that would have horrified George W. Bush had it been presented to him as president. After two decades in which immigration hardliners had failed to demonstrate their issue had deep popular support within the party, they finally got the upper hand. The party learned that a more liberal immigration policy was hugely alienating to its base and was going to conduct the 2016 presidential contest with that as a centerpiece no matter who the nominee was—including self-evident immigration softies like Jeb Bush.

So then we get to Trump’s more, shall we say, innovative issues in a Republican context—his attack on free trade and his neo-isolationism. Here the only evidence that the GOP has moved in these directions is Trump’s rise, and you would therefore have to believe Trump captured his voters’ enthusiasm because of his issue set. And to believe that you would have to believe that the single most incoherent presidential candidate in American history had an issue set comprehensible to his voters. When he says he wants no troops on the ground in the Middle East but he wants to seize the oil, is he George Washington saving America from foreign entanglements or Douglas MacArthur seeking to cross into China? Or both? Or neither? When he says he wants a trade war with China that would raise the prices of the daily goods his working-class supporters live on by 45 percent, is that a serious proposition or merely a guy sucking air out of a balloon and speaking in a helium voice?

When Marybeth Glenn refers to Trump in her tweetstorm as a “Trojan Horse nationalist,” this is what she means—the Trump who effectively staged a hostile takeover of the Republican primary process by denying his own history of social liberalism and pretending to be the possessor of a true conservatism that apparently only just came to him midway through the seventh decade of his life.

But is this Trumpian pseudo-conservatism the reason for his rise, the cause of his takeover of the party, the animating force behind his rally crowds? Of course not. He donned conservative garb to further his own quest for power. It is an eerie echo of Richard III’s glee at his own seductive skill: “Thus I clothe my naked villainy with odd old ends stolen out of holy writ / And seem a saint…Then I sigh, and with a piece of Scripture / Tell them that God bids us to do evil for good.”

But the truly forgotten Republican voter never bought Trump’s new outfit. I mean the Republican person who believes in limited government and a strong national defense and some kind of a moral frame for our politics—a moral frame she shares with Democrats and liberals in the sense that she believes the causes and candidates for whom she has worked and voted are engaged in the act of doing good for the country, doing good for others, and representing a positive understanding of humanity.

And now what are we to say to them? The writer Heather Wilhelm spoke for many of us who were horrified by the October revelations of Trump’s Rat Packish morality and Cosbyish conduct, the excuses made for it by Republican elders, and the silence of many Republican politicians when she tweeted: “I’ve critiqued the left’s ‘pervasive rape culture’ narrative for years. Stunning to see the Trump GOP do its best to convince me it’s true.” (One of those critiques, “The ‘Rape Culture’ Lie,” appeared in our March 2015 issue.)

In the wake of these exposures, Trump has marshaled his “forgotten voter” to ballast him. And still the fear of that voter’s wrath has frozen most of the Republican Party’s officials into place. They are under no illusions, by the way, as they are frozen as well in fear of the judgment of the larger electorate in November. But it seems not to have occurred to them that their paralytic non-response to Trump’s personal barbarity would threaten the party’s future with the truly forgotten Republican voter—the one who worked tirelessly for the common good through the Republican Party until she was told she had to make common cause with those who would elevate a sociopathic misogynist to the presidency of the United States. 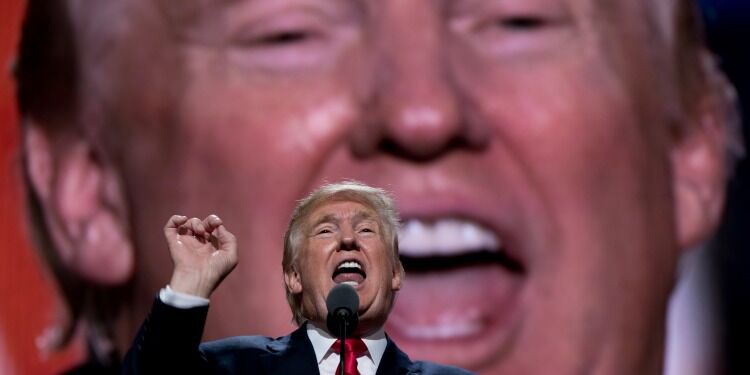