he days leading up to President Trump’s recognition of Jerusalem as the capital of Israel were fraught with apocalyptic warnings. Palestinian spokesmen and allies, former Obama-administration officials, and the media elite slammed the prospective decision as a reckless betrayal of the peace process that would inflame the Middle East and provoke further bloodshed. A casual reader of the news would have been likely to interpret the controversy as yet another example of an irresponsible president catering to domestic special interests at the cost of American global prestige. What I observed, however, was something altogether different: the Obama echo chamber at work.

Back in 2016, then–deputy national-security adviser Ben Rhodes gave an extraordinary interview to the New York Times Magazine in which he revealed how President Obama exploited a clueless and deracinated press to steamroll opposition to the Iranian nuclear deal. “We created an echo chamber,” Rhodes told journalist David Samuels. “They”—writers and bloggers and pundits—“were saying things that validated what we had given them to say.”

Rhodes went on to explain that his job was made easier by structural changes in the media, such as the closing of foreign bureaus, the retirement of experienced editors and correspondents, and the shift from investigative reporting to aggregation. “The average reporter we talk to is 27 years old, and their only reporting experience consists of being around political campaigns,” he said. “That’s a sea change. They literally know nothing.”

And they haven’t learned much. It was dispiriting to watch in December as journalists repeated arguments against the Jerusalem decision presented by Rhodes on Twitter. On December 5, quoting Mahmoud Abbas’s threat that moving the U.S. Embassy to Jerusalem would have “dangerous consequences,” Rhodes tweeted, “Trump seems to view all foreign policy as an extension of a patchwork of domestic policy positions, with no regard for the consequences of his actions.” He seemed blissfully unaware that the same could be said of his old boss.

The following day, Rhodes tweeted, “In addition to making goal of peace even less possible, Trump is risking huge blowback against the U.S. and Americans. For no reason other than a political promise he doesn’t even understand.” On December 8, quoting from a report that the construction of a new American Embassy would take some time, Rhodes asked, “Then why cause an international crisis by announcing it?”

Rhodes made clear his talking points for the millions of people inclined to criticize President Trump: Acknowledging Israel’s right to name its own capital is unnecessary and self-destructive. Rhodes’s former assistant, Ned Price, condensed the potential lines of attack in a single tweet on December 5. “In order to cater to his political base,” Price wrote, “Trump appears willing to: put U.S. personnel at great risk; risk C-ISIL [counter-ISIL] momentum; destabilize a regional ally; strain global alliances; put Israeli-Palestinian peace farther out of reach.”

Prominent media figures happily reprised their roles in the echo chamber. Susan Glasser of Politico: “Just got this in my in box from Ayman Odeh, leading Arab Israeli member of parliament: ‘Trump is a pyromaniac who could set the entire region on fire with his madness.’” BBC reporter Julia Merryfarlane: “Whether related or not, everything that happens from now on in Israel and the Pal territories will be examined in the context of Trump signaling to move the embassy to Jerusalem.” Neither Rhodes nor Price could have asked for more.

Network news broadcasts described the president’s decision as “controversial” but only reported on the views of one side in the controversy. Guess which one. “There have already been some demonstrations,” reported NBC’s Richard Engel. “They are expected to intensify, with Palestinians calling for three days of rage if President Trump goes through with it.” Left unmentioned was the fact that Hamas calls for days of rage like you and I call for pizza.

Throughout Engel’s segment, the chyron read: “Controversial decision could lead to upheaval.” On ABC, George Stephanopoulos said, “World leaders call the decision dangerous.” On CBS, Gayle King chimed in: “U.S. allies and leaders around the world say it’s a big mistake that will torpedo any chance of Middle East peace.” Oh? What were the chances of Middle East peace prior to Trump’s speech?

On CNN, longtime peace processor Aaron David Miller likened recognizing Jerusalem to hitting “somebody over the head with a hammer.” On MSNBC, Chris Matthews fumed: “Deaths are coming.” That same network featured foreign-policy gadfly Steven Clemons of the Atlantic, who said Trump “stuck a knife in the back of the two-state process.” Price and former Obama official Joel Rubin also appeared on the network to denounce Trump. “American credibility is shot, and in diplomacy, credibility relies on your word, and our word is, at this moment, not to be trusted from a peace-process perspective, certainly,” Rubin said. This from the administration that gave new meaning to the words “red line.”

Some journalists were so devoted to Rhodes’s tendentious narrative of Trump’s selfishness and heedlessness that they mangled the actual story. “He had promised this day would come, but to hear these words from the White House was jaw-dropping,” said Martha Raddatz of ABC. “Not only signing a proclamation reversing nearly 70 years of U.S. policy, but starting plans to move the embassy to Jerusalem. No one else on earth has an embassy there!” How dare America take a brave stand for a small and threatened democracy!

In fact, Trump was following U.S. policy as legislated by the Congress in 1995, reaffirmed in the Senate by a 90–0 vote just last June, and supported (in word if not in deed) by his three most recent predecessors as well as the last four Democratic party platforms. Most remarkable, the debate surrounding the Jerusalem policy ignored a crucial section of the president’s address. “We are not taking a position on any final-status issues,” he said, “including the specific boundaries of Israeli sovereignty in Jerusalem, or the resolution of contested borders. Those questions are up to the parties involved.” What we did then was simply accept the reality that the city that houses the Knesset and where the head of government receives foreign dignitaries is the capital of Israel.

However, just as had happened during the debate over the Iran deal, the facts were far less important to Rhodes than the overarching strategic goal. In this case, the objective was to discredit and undermine President Trump’s policy while isolating the conservative government of Israel. Yet there were plenty of reasons to be skeptical toward the disingenuous duo of Rhodes and Price. Trump’s announcement was bold, for sure, but the tepid protests from Arab capitals more worried about the rise of Iran, which Rhodes and Price facilitated, than the Palestinian issue suggested that the “Arab street” would sit this one out.

Which is what happened. Moreover, verbal disagreement aside, there is no evidence that the Atlantic alliance is in jeopardy. Nor has the war on ISIS lost momentum. As for putting “Israeli–Palestinian peace farther out of reach,” if third-party recognition of Jerusalem as Israel’s capital forecloses a deal, perhaps no deal was ever possible. Rhodes and Price would like us to overlook the fact that the two sides weren’t even negotiating during the Obama administration—an administration that did as much as possible to harm relations between Israel and the United States.

This most recent episode of the Trump show was a reminder that some things never change. Jerusalem was, is, and will be the capital of the Jewish state. President Trump routinely ignores conventional wisdom and expert opinion. And whatever nonsense President Obama and his allies say today, the press will echo tomorrow. 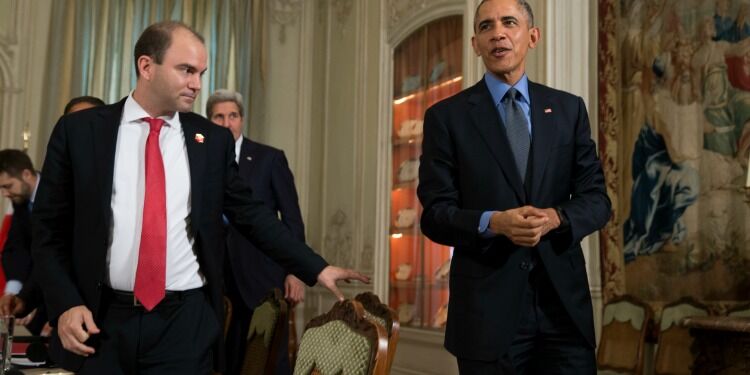