hen William F. Buckley Jr. died in 2008 at age 82, conservatives were deprived of his wit, his intelligence, his charisma, and his panache. But they also lost something more important than their leader’s charms. They lost his authority. And they need it now more than ever.

It was Buckley who for decades determined the boundaries of American conservatism. When he published his first book, God and Man at Yale, in 1951, there was no conservative journal of note, no mainstream challenge to liberalism. Philosophical conservatives such as Buckley’s teacher Willmoore Kendall, Eric Voegelin, Richard Weaver, and Leo Strauss were isolated. Like conservatism, they were ignored.

The American Mercury, for which Buckley worked briefly, was a nest of anti-Semites. The libertarian Freeman was beset with infighting, more interested in criticizing the New Deal than in coalition-building. Cranky, conspiratorial, bigoted, frustrated, powerless—this was the conservatism of William F. Buckley’s young adulthood.

Buckley changed things when he founded National Review in 1955. He introduced the philosophers to the populists. He published the traditionalists, the libertarians, the Cold Warriors in the same pages. Not only did he aspire to fuse free markets with traditional values, he wanted to be taken seriously by the New York media and cultural elite. Dismissed in embarrassing fashion by Dwight Macdonald in the pages of COMMENTARY in 1956, National Review was unquestionably the tribune of an engaged, informed, and rising American conservatism by the time Ronald Reagan was elected governor of California a decade later.

Why the transformation? Part of the reason is that Buckley and his editors spent an enormous amount of time and energy during the early years of the magazine disassociating their conservatism from its atavistic and gnostic forebears. National Review is a great example of media gatekeeping theory: By exiling anti-Semites, Birchers, and anti-American reactionaries from its pages, the magazine and its editor determined which conservative arguments were legitimate and which were not. By denying a platform to quacks and haters, they broadened their potential audience.

And Buckley did more than exorcise demons. He welcomed converts. When a group of anti-Communist liberals began to drift from the Democratic Party in the late 1960s and early 1970s, Buckley and company lowered the drawbridge and welcomed the neoconservatives to the castle. “Come on in,” National Review editorialized, “the water’s fine.” The editors of the American Mercury never would have published writers with the surnames Podhoretz and Kristol. The editors of National Review did. The result was a conservatism infused with empiricism, with the densely reasoned argumentative style of the New York intellectuals. The Reagan administration would reap the benefits.

Lately, though, it’s seemed as if the process by which William F. Buckley legitimized American conservatism has gone into reverse. The gatekeeper theory of media, it turns out, works only when the barriers to entry in the media are high. When Robert Welch was deprived access to subscribers of National Review, he really had no other means to address an audience beyond the members of the John Birch Society. When an article alleging a Zionist conspiracy to control the banks was rejected, it meant the end for that article and for the writer’s future. Publishing a magazine and producing television is expensive. Not everyone can do it.

But anyone with the Internet can write a blog or tweet or Facebook post or can Skype or record a podcast. The castle no longer has walls. The gatekeepers are mostly useless. Yes, the rise of social media may have helped conservatives—it allowed them to investigate, report, opine, entertain, and influence politics and policy by giving them the means to bypass liberal outlets. We’ve gone from a universe with half a dozen conservative journals publishing on infrequent schedules to one where there are dozens of center-right websites operating 24/7. I edit one of them.

But there is also a cost. As conservative media has proliferated, the authority of any one man or publication or radio show or television network has receded to the point of invisibility. For a time conservatism may have resembled the Catholic Church, with Buckley as pope, issuing bulls and ex-communicating heretics. But conservatism these days more closely resembles Islam, with untold numbers of mullahs issuing contradictory fatwas, with antagonistic schools of thought competing for adherents, with not a few radicals eager and willing to blow the whole thing up.

The nasty mouth-breathers Buckley expelled from conservatism have returned. The proximate cause of this efflorescence of the pre-Buckley right is Donald Trump’s campaign for president. Trump has dog-whistled at racists so much for so long that they feel resurgent. They call themselves the “alt-right,” a grab-bag category that includes nativists, eugenicists, bigots, anti-Semites, misogynists, reactionaries, aristocrats, monarchists, isolationists—basically anyone who hates today’s America and the modern world and the men and women, of any race or religion, who flourish in it.

For a while the alt-right was confined to the comment sections on websites, then it moved to Twitter, then it created websites of its own, and now, most disturbingly, its ideas, such as they are, are being published and defended and celebrated on sites associated with the conservative movement and Republican politics.

So, on March 29, Breitbart.com published “An Establishment Conservative’s Guide to the Alt-Right,” a long taxonomy in which authors Allum Bokhari and Milo Yiannopoulos argue, “There are many things that separate the alternative right from old-school racist skinheads (to whom they are often idiotically compared), but one thing stands out above all else: intelligence.” Hate to break it to you, guys, but a smart skinhead is still a skinhead.

“In response to concerns from white voters that they’re going to go extinct,” the authors continue, “the response of the Establishment—the conservative Establishment—has been to openly welcome that extinction.” Ah, yes—because you know Mitt Romney spends his days thinking about how to punish the white man. What was that about the alternative right being “intelligent” again?

On March 30, TheFederalist.com published “The Intellectual Case for Trump I: Why the White Nationalist Support?” It’s a rambling, overly long, embarrassingly personal essay mainly about the (Jewish) author’s failed attempts to court an avowed white supremacist: “I continued to send out feelers and message and speak with her online, keeping my ethnic heritage a secret at first so I could probe her ideology” (!).

The argument of the piece amounts to this: “When you strip away the swastikas, imitation Hugo Boss uniforms, and Klan hoods, there are things that even rabid, clannish white nationalist society does better than our own.” Which things? “Ironically, given their loathing of other cultures, the biggest one is bilingual education.” In German.

What at first seem like absurd and unintentionally hilarious articles are in fact quite malevolent. They are the vehicles by which anti-liberal and dehumanizing sentiments become legitimized in conservative circles. They are evidence that we are living in the midst of a sort of historical counterfactual: What if the Birchers had expelled Buckley, and not the other way around? They are stepping stones on the path to a pre–National Review media universe of embattled, embittered, impotent conservatives—another conservative dark age. 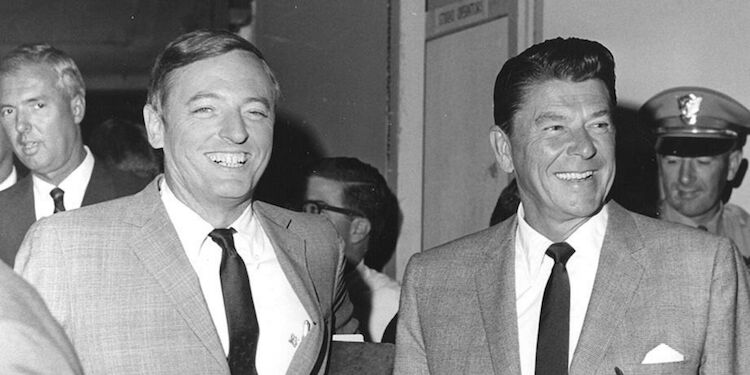