n December 1981, “The Education of David Stockman” appeared in the Atlantic Monthly. It was a profile of the California congressman whom President Reagan had named director of the Office of Management and Budget the year before. For the story, written by liberal journalist William Grieder, Stockman spoke freely and contemptuously about his boss’s policies and decisions. This was a bad choice.

The unwritten rule is that aides should keep their mouths shut as long as the president who hired them remains in office. The political community was shocked at Stockman’s flouting of convention. Reagan was mad, too. Stockman said later that after the article was published, he was “taken to the woodshed by the president.” His clout faded. He left the White House in 1985.

I thought of Stockman the other day as I read “The Aspiring Novelist Who Became Obama’s Foreign-Policy Guru” in the New York Times Magazine. Another young and influential White House aide, Deputy National Security Adviser Ben Rhodes, had granted extensive access to a journalist who may not have had his best interests in mind. And as Rhodes described his job as President Obama’s long-serving amanuensis, he, like Stockman, could not hide the disdain and contempt in his voice.

What distinguishes Rhodes is that the object of his derision is not the president, but the very media that the article credits him with manipulating so skillfully. This, too, was a bad choice: Ben Rhodes violated the media’s preposterous sense of independence and incorruptibility. And he did it in the pages of America’s most important newspaper, in an article built largely around the idea that the administration used the press to repeatedly and egregiously mislead the public about the purpose and details of the nuclear deal with Iran.

“Rhodes’s innovative campaign to sell the Iran deal,” writes author David Samuels, “is likely to be a model for how future administrations explain foreign policy to Congress and the public.” Considering the revelations in Samuels’s piece, “explain” might not be the right word.

“Dissemble” is more accurate. The basic outlines of the deal with Iran, Samuels notes, had been agreed to long before the 2013 election of President Hassan Rouhani, whom Rhodes portrayed as a “moderate” and a catalyst for talks. Another example, not mentioned by Samuels, is the administration’s promise of “anytime, anywhere” inspections of Iranian nuclear facilities, which John Kerry disavowed and which was exposed as false as soon as the ink on the agreement was dry. In each case, Rhodes drew on his master’s degree in creative writing to, as Samuels puts it, construct “overarching plotlines with heroes and villains, their conflicts and motivations supported by flurries of carefully chosen adjectives, quotations, and leaks from named and unnamed senior officials.”

His strategy relied on the inexperience and credulity of the Washington press corps. “All these newspapers used to have foreign bureaus,” Rhodes told Samuels. “Now they don’t. They call us to explain to them what’s happening in Moscow and Cairo. Most of the outlets are reporting on world events from Washington. The average reporter we talk to is 27 years old, and their only reporting experience consists of being around political campaigns. That’s a sea change. They literally know nothing.”

Typically, the media lauds journalists who enjoy access and powerful sources, but Samuels reverses that equation by showing Rhodes’s contempt for his marks.


Ignorant and naive journalists friendly to the White House were just one part of Rhodes’s operation. “We created an echo chamber,” he told Samuels. “They were saying things that validated what we had given them to say.” Opposition to the president was dismissed as lunatic or malevolent. “In the absence of rational discourse, we are going to discourse the [expletive] out of this,” Rhodes said. “We had test drives to know who was going to carry our message effectively, and how to use outside groups like Ploughshares, the Iran Project, and whomever else.”

Nor was it just recent college graduates and lefty nonprofits that helped sell the agreement. Rhodes’s assistant, Ned Price, expounded on the pro-deal network in a remarkable exchange with Samuels that has to be read in full to be truly appreciated. “We have our compadres,” he said. “I will reach out to a couple people, and, you know I wouldn’t want to name them —”

“I can name them,” I said, ticking off a few names of prominent Washington reporters and columnists who often tweet in sync with White House messaging.
Price laughed. “I’ll say, ‘Hey, look, some people are spinning this narrative that this is a sign of American weakness,’” he continued, “but—”
“In fact it’s a sign of strength!” I said, chuckling.
“And I’ll give them some color,” Price continued, “and the next thing I know, lots of these guys are in the dot-com publishing space, and have huge Twitter followings, and they’ll be putting this message out on their own.”

What a scene: a thirty-something White House official yukking it up with a freelancer over how easy it is to get “prominent Washington reporters and columnists” to parrot the government line. Want to rent a pundit’s Twitter feed? “Give them some color” and it’s yours.

It is not Rhodes but Samuels who identifies the only two reporters mentioned by name in the 10,000-word article. “For those in need of more traditional-seeming forms of validation,” Samuels writes, “handpicked Beltway insiders like Jeffrey Goldberg of the Atlantic and Laura Rozen of Al-Monitor helped retail the administration’s narrative.” Needless to say, Goldberg and Rozen object strenuously to this characterization. Goldberg calls it “defamatory.” Rozen, sounding like Rush Limbaugh, calls it “a drive-by shooting.” But anyone who has read their work knows that Goldberg is the president’s go-to writer for friendly interviews on foreign policy, and that Rozen probably thinks the nuke deal was too tough on Iran.

What truly outraged Goldberg and Rozen wasn’t the statement that they are close to the White House but the insinuation that they submit to its objectives and methods. Typically, the media lauds journalists who enjoy access and powerful sources, but Samuels reverses that equation by showing Rhodes’s contempt for his marks. He inverts the D.C. status pyramid by putting a deputy aide with a windowless office above a globe-trotting nonfiction writer whose publisher once sent ponies to his house to lure him from the New Yorker.

This is the reason some writers for the Washington Post, Slate, and the Huffington Post reacted so critically to the Rhodes profile. It’s not just that the subject of the piece is a lying, condescending snob who pretentiously likens himself to a character in a Don DeLillo novel. It’s that Samuels forces us to consider just how corrupt and pliable and loyal to President Obama much of the media is. Samuels violated the bro code of the D.C. fraternity, and so he finds himself attacked as a partisan, a warmonger, a neocon. 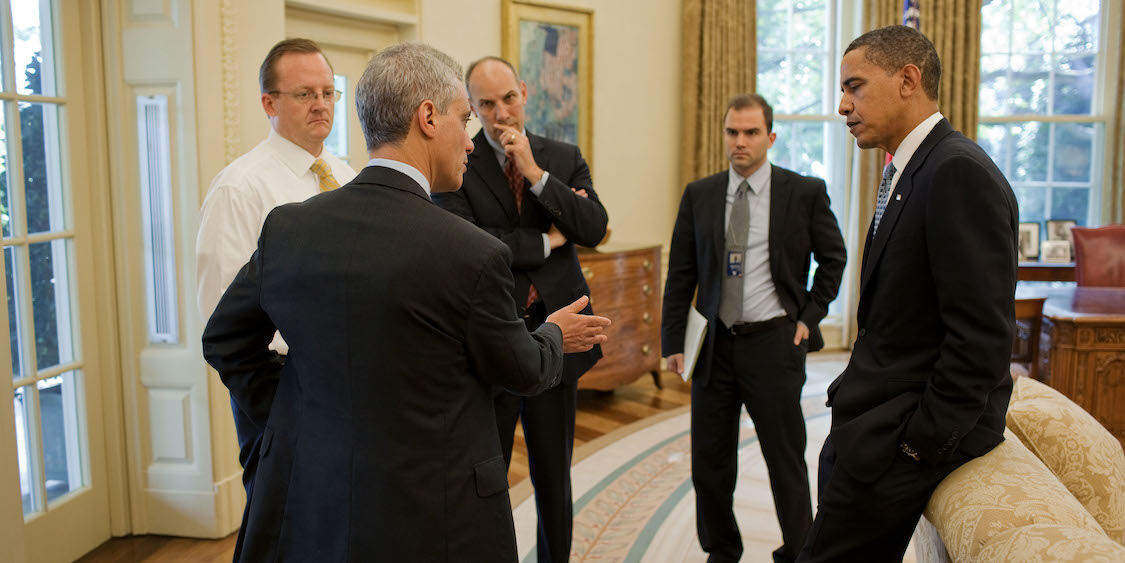