I’ve developed a foolproof test you can use to identify the frontrunner for the 2016 Republican nomination: Look at whomever the press is spending most of its time attacking.

When he won reelection in 2013 with 60 percent of the vote, New Jersey Governor Chris Christie became a top-tier presidential candidate. Then the following January the Bergen County Record published its story on the connection between a top Christie aide and the closure of traffic lanes on the George Washington Bridge.

The governor was subject to more than a year of nonstop negative media coverage, from the New York Times and MSNBC in particular. The investigations failed to link Christie directly to the lane closures, but that didn’t matter. His numbers plunged. His White House bid is now something of a long shot.

Last December, when Jeb Bush announced he was exploring a run for presidency, the former governor of Florida was seen as the man to beat. Bush had policy chops, lots of money, and a savvy team—not to mention a, well, somewhat problematic last name. Bush moved to the top of the polls. The press considered him the winner of the “invisible primary” of endorsements, fundraising, message, and staff.

But what the press bestows, it can take away. On February 1, the Boston Globe published an in-depth examination of Bush’s high school years at Phillips Academy in Andover, Massachusetts. The takeaway was summed up well by the headline of a rewrite of the story that appeared in the Hill: “Jeb Bush Was a Pot-Smoking Bully, Say Former Classmates.” It was the sort of fair-and-balanced coverage on pressing matters that we expect from the mainstream media.

The Bush portrayed by the media was not only bullying, however. He was also nepotistic. A subsequent article in the New York Times looked at how, “As Dynasty’s Son, Jeb Bush Used His Connections Freely.” The nerve.

The Washington Post, on the other hand, seems to have decided that hitting Jeb Bush was beneath it. So instead the paper attacked his spouse: “Documents Show the Expensive Tastes of Jeb Bush’s Low-Key Wife,” read the headline on a February 22 article by Karen Tumulty and Alice Crites.

The reporters examined public documents that showed how, over the course of 14 years, Columba Bush spent close to $100,000 on jewelry from one store in South Florida. That’s relevant to the 2016 election, I suppose, if you hate jewelry, which Bush plainly does not.

Tumulty and Crites disagree. “That kind of spending,” they write, “though well within [Bush’s] means, may present a challenge for Jeb Bush as he prepares for a presidential run with a message that the playing field between rich and poor is not fair or level.” The length and complexity of that sentence is a clue to its editorializing nature. Tumulty and Crites perform a classic journalistic two-step: Present information you believe harms the subject of your story, and then come up with an airy explanation, written in the subjunctive (“may present”) for why other people should care.

Anyone can do it. For example: Articles such as Tumulty and Crites’s may present a challenge for naive readers under the illusion that the media’s reporting on Republicans is unbiased or sympathetic or has the best interests of the GOP in mind. See, Mr. Bezos? When do I start?

As I write, Bush is no longer the frontrunner. Consequently the media seem to have backed off from him a little (for now). It is Governor Scott Walker of Wisconsin who has moved to the head of the polls and is the subject of most of the buzz.

But Walker presents something of a challenge for the media. His personal history, career background, and policies as governor have been under scrutiny since he won the election in 2010, defeated his state’s public-sector unions in 2011, survived a recall vote in 2012, and won reelection in 2014 with 52 percent of the vote. He’s been on an upward trajectory toward the Republican nomination since delivering a well-received speech at an event in Iowa in January.

How to attack him? The strategy seems to be not to criticize Walker for what he’s done in the past, but to press him on breaking news and on international or national issues with which he may be unfamiliar. And Walker has played into the media’s hands.

In February, at a private dinner in New York City, Rudy Giuliani said he wasn’t sure if President Obama loves America. The media went crazy over Giuliani’s remarks despite the fact that they were made by a former office-holder who isn’t running for president. Walker was at the dinner. Did he agree with Rudy? Does he think the president loves America?

Walker wouldn’t say. Nor is it only Giuliani that makes him so reticent. Probably because he has been immersed in Wisconsin politics for more than 20 years, the range of public questions on which the governor has definitive answers seems to extend from state budgets to social issues to the Packers’ playoff chances.

Walker and his aides are aware of their rather parochial set of concerns. They are trying to ramp up their policy operation and declare positions on key topics—such as those portions of the world that are not Wisconsin—as quickly as they can. In the meantime, when asked about something he hasn’t made up his mind on, the governor says, “I don’t know.”

He’s been saying it a lot. Evolution? “I’m going to punt on that one,” he told a reporter while in London in February. Is Obama a Christian? “I’ve never asked him that,” he said to Dan Balz and Robert Costa of the Washington Post a little over a week later. “You’ve asked me to make statements about people that I haven’t had a conversation with about that. How [could] I say if I know either of you [is] a Christian?” A spokesman for Walker later clarified that the governor does believe Obama is a Christian. I for one am still not sure about Bob Costa, though.

“I will always choose to focus on what matters to the American people, not what matters to the media,” Walker wrote in a USA Today op-ed. This sort of sentiment is sure to win over conservatives, but I admit—RINO alert—to being a bit troubled at Walker’s attitude.

Back in 2012, when Newt Gingrich lambasted reporters for asking asinine questions, no one doubted that Gingrich could have answered such questions, at length, if he wanted to. It’s because one cannot say the same of Walker, who clearly has been too busy fighting for his political life to formulate responses to global controversies, that the press is scoring points by exposing him as unprepared or uninformed.

Of course, it’s only the spring of 2015. Nobody knows what’s going to happen in the coming months. Nobody knows who will emerge as the GOP nominee. At this point in 2007, John McCain’s campaign hadn’t even collapsed yet, and he went on to win the nomination.

There is plenty of time for Scott Walker to hit the books and deliver crisp and knowledgeable answers to whatever questions the press throws his way. And there is also plenty of time for the media to scour another Republican candidate—there are so many to choose from—and report breathlessly on his potential scandals, his high school years, his wife’s shopping habits, and his views on God, Darwin, and whatever silly thing Donald Trump said the other day.

I don’t know the name of the next 2016 frontrunner, but I do know it will be whoever finds himself the subject of intense, breathless, hyperbolic, ridiculous coverage. Marco, Rand, Ted, Rick, and Bobby: Prepare yourselves.

Among Washington Commentary columnist Matthew Continetti’s books is The Persecution of Sarah Palin, published in 2009. 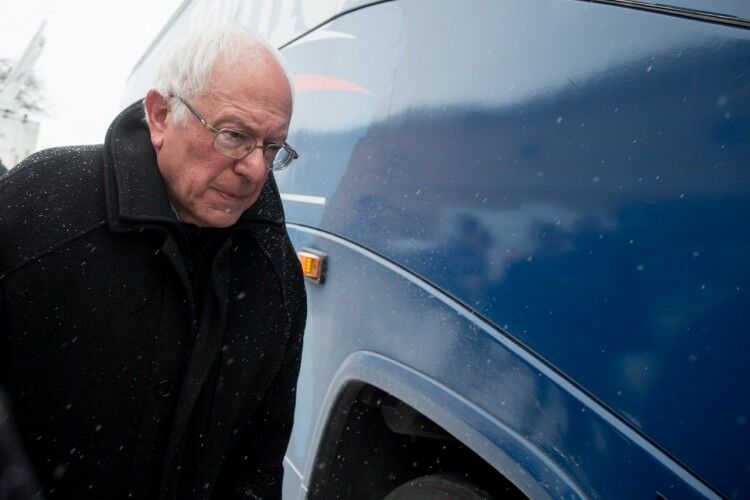 Why Bernie Sanders Doesn’t Talk About Being Jewish

What Is the Future of Conservatism in the Wake of the 2012 Election?—A Symposium

Playing to Win, by Jeff Greenfield; How to Win Votes, by Edward N. Costikyan; Who Votes, by Steven J. Rosenstone and Raymond Wol