If you will it, it is no dream.

Each Jew knows how thoroughly ordinary he is; yet taken together we seem caught up in things great and inexplicable. It is almost as if we were not acting but being acted through . . . . Big things seem to happen around us and to us.

avid Rubinger, one of Israel’s most celebrated photojournalists, passed away in March. His death occurred two months before the 50th anniversary of the day Rubinger snapped the most famous photograph in Israel’s history: three soldiers standing reverently at the Wailing Wall soon after Jerusalem was captured in the Six-Day War. Decades later, Rubinger was asked if he believed the soldiers at the wall to be the best photograph he had ever taken. “The worst!” he replied. “From a photographic perspective, it’s a bad picture. A good photograph includes no unnecessary elements. But here there are all kinds of people in the background, half a head here, a quarter of a nose there. . . . It’s an important photograph, but not a good one.”

What, then, is the source of the image’s endurance? Why does Yitzchak Yifat, the central soldier in the photo, continue to be recognized by Jews all over the world half a century on? Why, when Rubinger’s passing was reported, was this photograph cited as the embodiment of his legacy? And why, when the 50th Jerusalem Day is celebrated this month, will that photo be everywhere?

The answer lies in contrasting Rubinger’s work with that of other photographers. The picture of the paratroopers is constantly compared to an American image: Joe Rosenthal’s immortalization of the moment that American Marines hoisted the Stars and Stripes aloft at Iwo Jima. But understanding the power of Rubinger’s picture should begin with us noting the differences, rather than the similarities, between his photo and Rosenthal’s.

The Iwo Jima image inspires because of an action that it illustrates; young men working in unison to plant a flag, a tribute to all the service of all Marines, soldiers, and sailors who served in action, who risked and gave their lives to save civilization, rendered more poignant by the fact that several of the Marines hoisting the flag would be dead days later.

In Rubinger’s photo, the emphasis is the exact opposite; what is stressed is not action but a sudden inaction. As Yossi Klein Halevi put it, the photo is stirring precisely because “at their moment of triumph, the conquerors are themselves conquered.” After achieving the most famous Jewish military victory in 2,000 years—becoming the first Jewish soldiers to hold Jerusalem since Bar Kochba’s rebellion—the soldiers stand still before the locus of Jewish longing. They suddenly seem, to paraphrase Milton Himmelfarb’s felicitous phrase, not actors but rather acted upon. Yitzchak Yifat seems awestruck at being a thoroughly ordinary person caught up in things great and inexplicable.

Israel’s history contains grand photographic moments, such as Ben Gurion’s declaration of independence, Begin and Sadat at Camp David, the funeral of Yitzhak Rabin. Yet none of these looms as large in the public mind as Rubinger’s soldiers. Even many of the most beloved photos of Israel’s leaders show them less as statesmen than vulnerable human beings, and a great deal of them were taken by Rubinger: Golda Meir washing dishes and feeding her grandson, Menachem Begin devotedly placing a shoe on the foot of his wife Aliza. These are photos that involve juxtapositions of greatness and humility.

This points to a dialectic at the heart of Zionism. Should Jewish achievement, one small people’s outsized impact on the world as it outlived all its enemies, be seen as a triumph of the human will, or as a miracle? Are Jews the primary actors in this story, or are they the acted upon? Which quote best captures the endurance and the achievements of the Jews—Herzl’s or Himmelfarb’s?

The answer is both. Rabbi Joseph Soloveitchik famously reflected on the seemingly contradictory descriptions in the Bible regarding the creation of man. In the first chapter of Genesis, Adam and Eve are created in the image of God himself and are commanded to “fill up the world and conquer it.” In Genesis’s second chapter, however, Adam is made from the dust of earth, a sign of his mortality, and is told to abide with God in the Garden of Eden. In Judaism, Rabbi Soloveitchik argued, both human majesty and humility—the Adam who strives for conquest and greatness, and the Adam who is in awe of his Creator—are inherent, both willed by God.

The story of Israel is one in which both Adams were made manifest. Rubinger’s photo, of warriors who waged one of the most brilliant wars in military history suddenly standing still at the Wall, is thus the embodiment of Israel itself. Therein lies its allure. Zionism was predicated on the ability of human beings to achieve even the impossible: “if you will it, it is no dream.” And it remains an immense, and majestic, human achievement—the return of a people to their land, making a desert into an Eden, creating a mighty military, and building the Silicon Valley of the Middle East. Yet as Paul Johnson put it in these pages in 1998, “In the past century, over 100 completely new independent states have come into existence. Israel is the only one whose creation can fairly be called a miracle.” Israel is itself a symbol of human achievement and divine mystery, and the combination of both in Rubinger’s photo means he had somehow captured the essence of Israel itself.

Rubinger’s noteworthy passing, right before Jerusalem’s jubilee, the 50th anniversary of the moment that made him famous, inspires us to ponder once more a photo that reflects the fulfillment of Herzl’s dream while simultaneously providing an important qualification of Herzl’s vision. Herzl sought in statehood the normalization of the Jewish people and the end of anti-Semitism. In the end, of course, Israel has achieved anything and everything but those aims. The Jews have their state, but its story is far from ordinary: Israel is a flourishing democracy that is a reminder of the mystery of Jewish chosenness.

Rubinger’s photo will be revered for many years to come, given its ability to illustrate the triumph and ingenuity of a once-persecuted people, as well as the miraculousness of its endurance. For Israel today, this image portends not only more ingenious Jewish achievements—but also, hopefully, many more miracles yet to come. 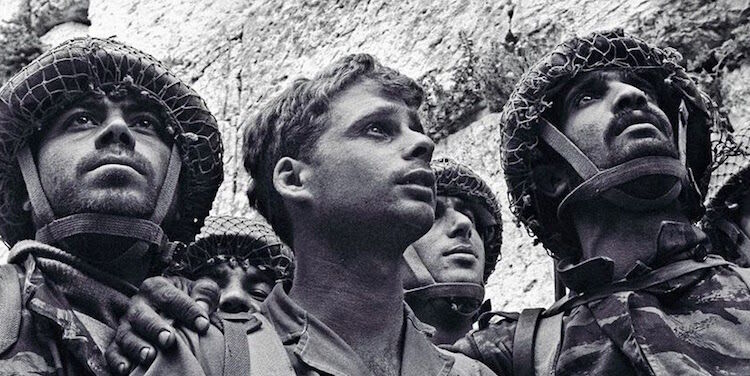