he term “public intellectual” took off in the 1980s with the publication of Russell Jacoby’s book The Last Intellectuals. Jacoby’s argument was that the intellectual ferment of the 1950s and 1960s in the pages of magazines such as Commentary had departed from the American scene, and people who might once have labored in these vineyards were instead opting for academic specialization rather than providing their general wisdom on a freelance basis.

In Jacoby’s view, specialized intellectuals spoke to one another in academic language and therefore did not, and could not, provide intellectual guidance to the nation as a whole. Jacoby laid out a host of reasons for this change, most notably the microeconomic woes of the American intellectual. Working as a freelancing generalist could not pay the bills, so the academic tenure path became more viable.

In the three decades or so since Jacoby laid out his argument, all the trends he described have become more pronounced, and a whole host of new impediments to the development of public intellectuals has arisen as well—including the fact that many of them could not at the time find refuge in the universities and have even less of a possibility of retreating there now. Since the 1970s, conservatives wishing to express themselves on matters of public policy have found it necessary to turn to employment at think tanks—more formally known as “research institutions”—to find a place to produce scholarly or practical work in the realm of ideas.

Indeed, to the extent that we do have public intellectuals at all in our society, they are far more likely to be think-tank scholars than tenured academics. Think tanks, however, have faced their own problems in recent years, as the never-ending quest for funding has made many think tanks both more partisan as well as loath to address issues that might alienate donors.

Drezner is a tenured political-science professor at Tufts, but he also writes accessible books about foreign policy (notably one on zombies and theories of foreign relations). He also has a blog at the Washington Post and maintains an active presence on Twitter. Such mainstream writing, he notes, comes at a cost, as some colleagues dismiss him by calling him, to his face, “a good writer.” In academia, apparently, to be a good writer means that the quality of your prose is a weapon used to mask the weakness of your scholarship or your ideas, or both. The criticism also likely stems from jealousy over Drezner’s mainstream success.

Beyond the snobbishness, petty jealousies, and bad prose of academia, Drezner identifies other impediments to the development of public intellectuals including our increasingly partisan society, the corrupting effect of research subsidized by interested parties, and the rise of private-sector idea-generating entities such as McKinsey and Goldman Sachs. These developments mean that not only are academics not capable of being public intellectuals, but think tankers are finding it harder as well.

As fundraising becomes increasingly important in the think-tank world, donors realize that they can demands quid pro quos. Not only can they support the work of individual scholars they admire, but donors can also require, either tacitly or explicitly, that think-tanks take positions helpful to their interests and avoid positions detrimental to those interests. Drezner runs through some examples of donor-driven controversies that raise questions about think-tank objectivity. It is to his credit that he includes a $14.8 million donation from Qatar to the Brookings Institution—a matter investigated by the New York Times—because Drezner has an appointment at Brookings.

Drezner’s affiliations give him what he calls “upper-middle-class status in the marketplace of ideas,” and they have resulted in a book both interesting and informative. Still, his “thought leader” vs. “public intellectual” comparison might not catch on. At one point, he uses as contrasting examples the “thought leader” Niall Ferguson and the “public intellectual” Fareed Zakaria. Ferguson writes on contemporary matters even as he produces popular economic histories and continues to work on a multi volume biography of Henry Kissinger, while Zakaria writes columns and books and hosts a TV talk show. As Drezner shows, both use their communicating skills—oral and written—to advance their names and causes utilizing a host of available technologies. When it comes to the ideas industry, in the end, the only thing that matters is the work produced, not the means of its production. 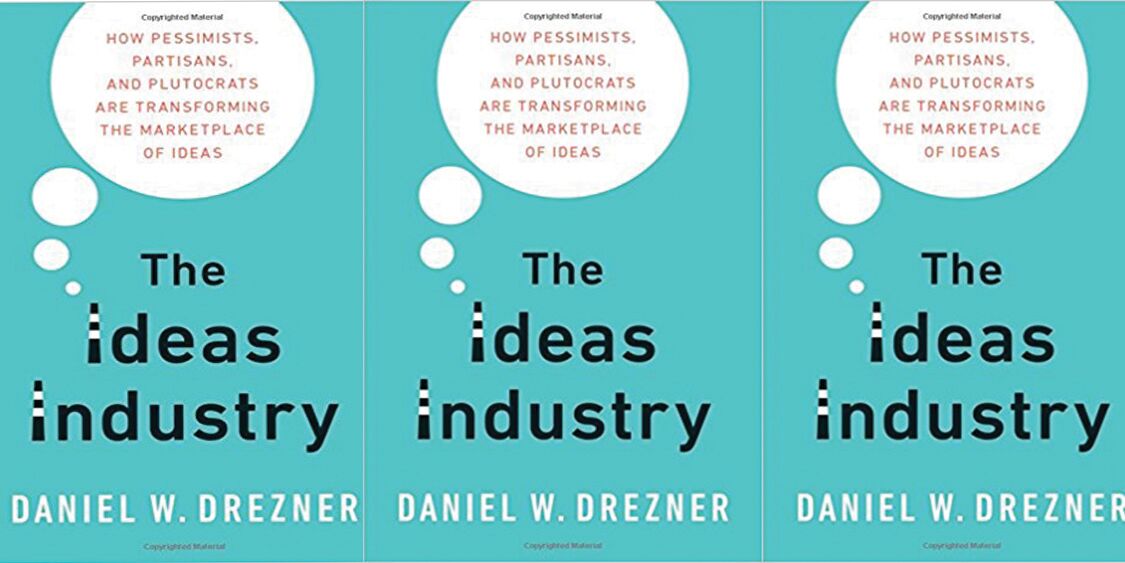 Tevi Troy, a regular contributor to Commentary, is a presidential historian and former White House aide. His first book was Intellectuals and the American Presidency: Philosophers, Jesters, or Technicians?