Chris Gibson, the quasi-conservative Republican congressman from New York state’s Hudson Valley, had all but declared he was going to run for governor of New York against Andrew Cuomo in 2018. But he executed a dramatic about-face Monday, announcing an unequivocal retirement from politics in favor of an academic post in Massachusetts.

And so Williams College’s gain is the New York GOP’s telling loss. Indeed, the entire state’s.

Gibson is a class act by any standard; judged against the freaks, fakers and felons who populate New York politics these days, he is positively luminescent. He converted an ROTC commission from a small upstate New York college into full-colonel’s eagles during a 24-year Army career that saw service in the Gulf War, Kosovo and Iraq; along the way, he earned four Bronze Stars and a Purple Heart.

He went to Congress in 2011, imposing a three-term limit on himself at the outset—a pledge he honored months ago by announcing his impending congressional retirement while opening a gubernatorial exploratory committee.

Now that’s over, too. Why? Trump. Or, rather, Carl P. Paladino of Buffalo, N.Y., a vulgar real estate developer who ran the prototypical Trump campaign for governor himself in New York in 2010—stomping the establishment GOP candidate in a positively vile primary and then losing spectacularly to Cuomo in an equally ugly general election.

He’s been sulking ever since, and all-but promising a comeback – telling a Buffalo newspaper this past winter that he’d enter another primary if need be.

Which must have been a daunting prospect for Gibson, as it would be for any honorable candidate: Who wants to rassle a pig, when the pig would most likely win?

For the only fundamental difference between Donald Trump and Carl Paladino is the audacity of Trump’s ambition. The two are whip-smart, but utterly without scruple; they lie audaciously; they have a remarkable feel for legitimate voter discontent and an instinct for inflaming it without offering anything approaching constructive alternatives.

Their fundamental thuggishness is scarcely concealed—Paladino’s prescription for opposition pols in 2010 was to beat them with baseball bats, which sounds familiar, no?—and why would they hide it: It’s part of their appeal.

So no surprise that during the recent New York Republican primary, Paladino was rarely more than two feet from Trump’s elbow, though which fellow was the mini-me is open to debate.

But what next? That is the question.

Paladino’s 2010 campaign ended in a pile of flaming wreckage—after, arguably, draining the state’s Republican Party of whatever credibility, and decency, it possessed when the exercise began.

Trump and the national party seem to be headed in the same direction—though, of course, the pile will be far larger and the effect infinitely more consequential.

But, by God, both men will have made their point. It’s unlikely that point was lost on Chris Gibson— though no doubt his decision rested on more than the unhappy prospect of rolling around in the hog wallow with Donald Trump’s soul brother, Carl Paladino.

But, sadly, Gresham’s Law works in politics, too. This wouldn’t be the first time that a bad candidate drove out a good one. And it won’t be the last time this year a decent Republican candidate exits politics due to Trumpism. 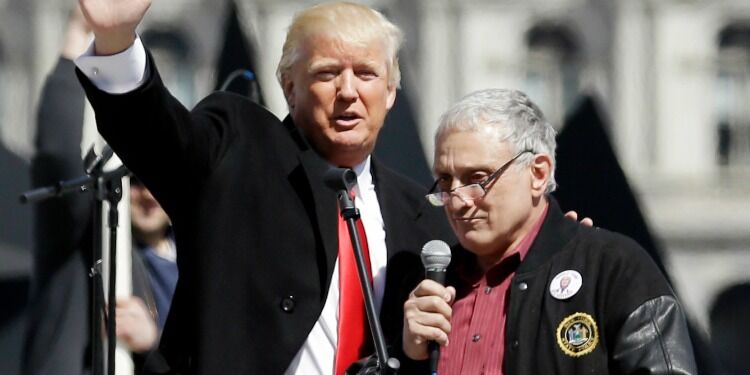