After watching Tucker Carlson on FOX News and spending time on Twitter, Faludi determined that the right has diabolically coopted the MeToo movement’s signature phrase and is now hypocritically using it against women. “Spend some mind-numbing hours tracking the origins of ‘Believe All Women’ on social media sites and news databases—as I did—and you’ll discover how language, like a virus, can mutate overnight,” Faludi writes. “All of a sudden, yesterday’s quotes suffer the insertion of some foreign DNA that makes them easy to weaponize. In this case, that foreign intrusion is a word: ‘all.’”

Faludi goes on to claim that “the canard, blown into a bonfire by the right, became accepted truth in mainstream media, from NPR to the New York Times to the Globe and Mail in Canada, with pronouncements characterizing #BelieveAllWomen as “the rallying cry of the #MeToo movement.”

But the phrase was a canard long before the word “all” was attached to it. That’s why even mainstream media outlets like NPR and the New York Times made such a seamless transition to using it. The demand that women be believed has always been a direct challenge to the way our system of justice is structured to work—and the activists arguing for it (and the politicians like Hillary Clinton who have said so even before the MeToo movement gained prominence) know that. If your starting point is reflexively to believe an accuser, rather than to respectfully hear their accusations while objectively attempting to verify them, you have already abandoned due process.

That doesn’t mean that our system is perfect. Far too many states still have a shocking backlog of rape testing kits they haven’t processed; there are significant hurdles women face in reporting their experiences of harassment or assault; there is still too much cultural pressure for women to stay silent; and too many women, with reason, fear professional and personal retaliation if they do speak out.

And Faludi is correct to point out the hypocrisy of people like White House adviser Kellyanne Conway, who complains about MeToo’s double standards while working for a president who has also been accused by multiple women of harassment and assault.

Acknowledging this still leaves plenty of other slogans the MeToo movement could have embraced, however: ListentoWomen, RespectWomen, even JusticeforWomen. And there are many more conservatives (and plenty of liberals as well) who are comfortable with consistency and happy to argue that both Brett Kavanaugh and Joe Biden deserve the presumption of innocence when a woman comes forward with an accusation against them.

But Faludi has a larger target in her sites: “Since at least the late ’90s, gotcha conservativism’s specialty has been condemning feminists for failing to live up to their dogmatist label,” she writes. “First, caricature feminists as a bunch of groupthink totalitarians, then accuse them of hypocrisy every time they are not in lock step. But guess what? Feminism has never, for five minutes, been about lock step.”

There is no need for caricatures about groupthink when the reality makes them all too visible—just ask any left-leaning woman who goes against the identity politics message of the feminist left these days, such as the Jewish feminists who were told they couldn’t participate in the Women’s March, or any left-of-center woman who second-guessed Christina Blasey Ford’s credibility.

If BelieveWomen meant what Faludi now claims it does, we wouldn’t have seen the extremes of vigilante justice meted out by the anonymous accusers on the “S***ty Media Men List” (whose creator, once outed, was hailed as a heroine and given a book contract to write about sexual harassment). We wouldn’t have watched Al Franken ousted from the Senate, or Brett Kavanaugh subjected to baseless attacks by women whose uncorroborated and, at times, bizarre stories were then eagerly retold by major news like the New York Times and the New Yorker (it is odd that Ben Smith’s recent, critical assessment of New Yorker writer Ronan Farrow’s journalism failed to dissect the rumor-mongering piece about Kavanaugh that Farrow bylined with Jane Mayer).

The edict to BelieveWomen has always been problematic—and rightly so because women don’t always tell the truth about assault. One need only look back on the debacle of the Duke lacrosse team rape story or the fabulist tale told by Rolling Stone of rapists run amok at the University of Virginia, to see this. More recently, the contradictions and hypocrisies of the MeToo movement have accumulated in plain sight. Why, for example, was Virginia lieutenant governor Justin Fairfax given a pass when he was accused of rape, but other politicians were not?

The right didn’t need to weaponize BelieveWomen. It’s been a badly designed cudgel for far too many ideologues since it was first embraced by MeToo activists. The only reason BelieveWomen is being defended by someone like Susan Faludi now is that it’s being wielded against a man, Joe Biden, whom she’d prefer to see in the Oval Office instead of Trump.

And that’s a shame. Victims of assault and harassment are the ones who suffer when the category of victim is expanded to the point of absurdity and due process ignored. We need to work to create a culture where women’s experiences are treated respectfully and justice is meted out fairly and impartially. Faludi’s pretense—that the real problem with BelieveWomen is that the right deliberately undermined the left’s faultless slogan—is nonsense. Use better words, Susan. 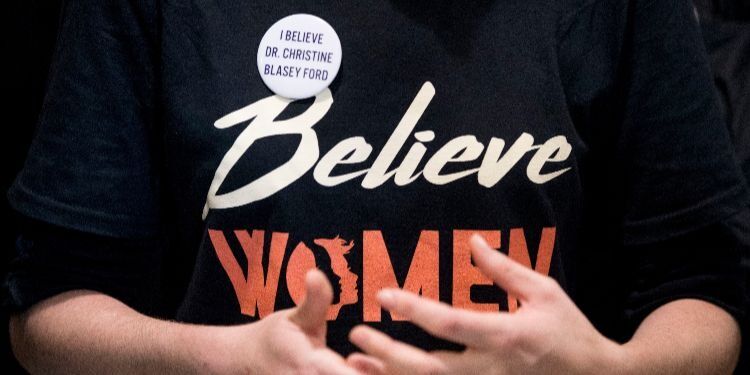