On a subreddit called Convenient Cop, you can watch videos of reckless drivers caught in the act by police officers. If you’ve ever seen someone risk others’ lives by running a red light or cutting people off on the interstate, there’s something deeply satisfying about witnessing these moments of instant karmic justice.

But if a recent opinion piece in the New York Times is any guide, we shouldn’t be deriving pleasure or reassurance from watching these scofflaws brought to heel. Instead, we should be worried that they might be illegal immigrants who could be unfairly deported.

If you’re wondering how the progressive left has pushed the Democratic party towards an almost-open-borders immigration policy, this op-ed offers an interesting psychological case study.

The author, Margaret Renkl, engaged in some public soul-searching after finding herself the victim of a hit-and-run that caused serious damage to her car. A good Samaritan who witnessed the collision in a hospital parking lot left a note on Renkl’s windshield informing her of the culprit’s tag number and car model. Renkl called her car insurance company and the police to report the incident and wondered what kind of irresponsible person damages someone’s car without leaving a note.

But then, she writes, “it dawned on me that the driver might be undocumented, someone for whom a simple fender-bender would cost everything. What if giving my insurance company her tag number would make me complicit in a deportation?” Soon, she’s overcome by thoughts of “hollow-eyed babies in detention centers” and “hardworking immigrants, here for years, even decades . . . surrounded like fugitives and carried away, their hands zip-tied behind their backs, while their children wail.”

In fact, the bar for moral culpability hasn’t moved. People who break the law have still broken the law, regardless of their immigration status. What has moved is the bar for virtue-signaling. If Renkl is any guide, it has moved so far to the extreme that otherwise reasonable people are now comfortable arguing that breaking the law shouldn’t count if you’ve already broken the law to get into the United States.

Renkl’s moral contortions raise numerous questions: What if, instead of being a contributing opinion writer for the New York Times, Ms. Renkl was a poor, legal immigrant who needed her car to get to her job every day and who would struggle to pay the deductible and increased insurance premium such an accident would cause? What if she was a single parent trying to make ends meet? Or a senior citizen on a fixed income? What if the hit-and-run driver had killed a child rather than merely dented a car fender? Would Renkl’s sliding moral code still demand the perpetrator not be held accountable if they were in the U.S. illegally?

You can hold someone responsible for his or her actions while also trying to understand the context for them. It’s not an either/or situation. It’s why judges sometimes allow for mitigating circumstances during sentencing procedures.

But what Renkl is doing is something else, and it’s not practicing empathy. It’s indulging in self-serving condescension that confuses the signaling of liberal ideology with empathy (with a bit of white savior complex thrown in the mix). It’s identity politics masquerading as compassion.

Luckily for Renkl and her conscience, the hit-and-run perp turned out to be a worthy villain: “As it turns out, she is white, a professional with advanced degrees, and fully insured. I could stop fretting about my own moral culpability.”

But this doesn’t stop her from finding others morally culpable. When she takes the car to a body shop for repair and a mechanic tells her he sees a lot of hit-and-run accidents, some caused by uninsured illegal immigrants, she assumes he is a racist.

But could it also be that he’s seen less privileged people than Ms. Renkl suffer harm from hit-and-run drivers, some of whom happen to be illegal immigrants? No, Renkl assures us, he’s likely a victim of false consciousness and a defective conservative brain. “Conservative voters today are no doubt being manipulated by a political machinery that has long recognized their vulnerability to fear and revulsion,” she writes.

If Ms. Renkl is concerned about the plight of illegal immigrants, there is a great deal of real action—as opposed to moral posturing—that she can take. She can vote for politicians in local and national elections who share her views. She can volunteer or give her money to any number of immigration reform and immigration activist groups that work on behalf of legal and illegal immigrants in the U.S. She can even sponsor an immigrant who wants to come to the U.S.

There is nothing wrong with feeling compassion for people who risk everything to come to the United States, whether they get here legally or illegally. There is also nothing wrong with believing that sovereign nations need rules-based immigration policies and safe borders.

But the hollow, performative empathizing prevalent among liberals like Renkl is how Democrats running for president have nearly all ended up arguing that anything less than open borders is cruel and racist. It’s why they seem incapable of distinguishing between illegal immigrants and legal immigrants (and discussing how immigration law and the immigration process can be reformed to better handle our current humanitarian crisis at the border).

Making thoughtful distinctions is more important than ever given the abhorrent rhetoric about immigrants coming from President Trump and amplified by extremist voices in the conservative media. Referring to people at the border as an “invasion” or “infestation” is reprehensible and anathema to our country’s principles. It’s also dangerous. As Bret Stephens noted recently, such fear-mongering might attract viewers on cable news and appeal to many among Trump’s base of supporters; but it also motivates people like the Walmart shooter in El Paso, Texas.

Countering such hateful rhetoric by arguing that immigrants should not be held responsible for their actions is, however, deeply misguided. It is itself a kind of condescending racism to assume that people who aren’t born in this country shouldn’t be held accountable for their actions. If we are to continue to be a thriving nation of immigrants and a nation of laws, then we need to repair the frayed civil compact by not compromising the humanity of our immigrants or the integrity of our laws. 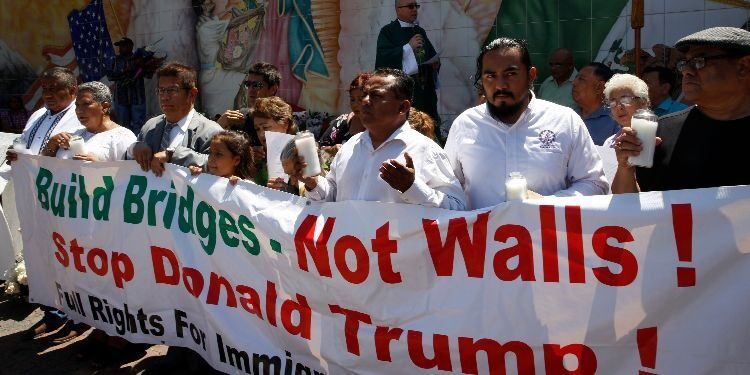