In the past few weeks, several public figures have found themselves on the receiving end of criticism for disregarding public health authorities’ social distancing guidelines. ABC News personality George Stephanopoulos drew the ire of his East Hampton neighbors when he was seen running errands and, later, on a golf course without a mask after his wife had tested positive for COVID-19 (Stephanopoulos later tested positive for the virus as well). President Trump’s daughter Ivanka and her husband Jared also ignored recommendations to stay home and instead traveled with their family from Washington, D.C. to the Trump National Golf Club in New Jersey to celebrate Passover.

Stephanopoulos and Ivanka Trump’s behavior was seen as particularly hypocritical given that both have been using their public platforms to urge the public to abide by the new social distancing requirements—Stephanopoulos on “Good Morning America” and Ivanka in a video posted on Twitter. Social media users aired their frustrations with them online (“I could shame people all day long,” one woman told the New York Times), and the paper, sensing a trend, dubbed our new impulse to scold wrongdoers “corona-shaming.”

If it’s a trend, it’s one driven as much by political leaders as it is by average Americans who are simply annoyed by people like Ivanka. New York City mayor Bill DeBlasio recently created a tip line where city residents could report the bad behavior of others, which prompted as many naughty memes as it likely did reports of naughty behavior. In the UK, where law enforcement apparently has a better understanding of the excesses of human nature, police have discouraged too much snitching. As the Guardian reported, “Police have been inundated with thousands of daily reports of people allegedly breaching coronavirus rules, prompting the police’s professional standards body to ask the public to curb ‘deliberate false reporting’ and the spread of ‘misinformation’ to target nuisance neighbors or to settle long-running feuds.”

The development and enforcement of social norms is a challenging process, even in normal times. During a crisis, rules change quickly, and norms don’t always smoothly follow.

Consider the fact that, until recently, the polite way to navigate public space, whether it be a sidewalk or a city bus or a public park, was to engage in what sociologists call “civil inattention.” Civil inattention is an acknowledgment of the unspoken rules of public behavior without the demand that we directly engage with others. It’s the nod you give the man who steps into the elevator or the glance you give the woman who sits down on the other end of the park bench. Civil inattention is the courtesy we extend to strangers in public space (and which we assume they will extend to us) that gives all of us a feeling of security even when we are surrounded by strangers. When it works, following these unspoken rules allows us to assume the best about the people around us rather than the worst.

This delicate balancing act (always at risk of disruption) is now much more challenging. We are (or should be) acutely attentive to others in public space because we’ve been encouraged to be hyper-vigilant. Is that stranger six feet away and practicing social distancing? Is he wearing a mask? Is she putting others at risk? It’s exhausting, but it also helps explain why we are quicker to judge the behavior of others right now. Neighborhood listservs in my city are clogged with complaints about rude, unmasked joggers huffing and puffing next to other pedestrians on sidewalks, or clueless people standing too close to others in line at the grocery store, for example.

It seems irresponsible to let minor acts of disobedience slide. Behavior that one could shrug off as merely entitled or ill-mannered in pre-pandemic days now has much more serious possible consequences: risking the health and lives of others. Being a bystander to misbehavior under these circumstances feels different. Shaming someone for risking others’ health isn’t the same thing as overreacting to someone’s harmless barbeque; it makes you feel like you’ve done something to help others rather than merely acting like an annoying martinet.

As well, the hodgepodge of official pandemic rules and edicts from cities, counties, and states has made it difficult to come to an acceptable, general standard for how we should behave. The enforcement of official rules is often uneven, which makes them seem unfair. And that prompts rule-breakers to rebel against any strictures, leaving those who do follow the rules to feel like the sacrifices they are making might not be worth it.

Granted, the shamers can invoke a powerful ally: Science. “It’s somewhat cathartic to be with like-minded individuals who are upset by people not following the recommendations of scientists,” one woman told the New York Times. But even though we’ve created a neologism—“covidiots”—to describe the people who break the rules or flout these new norms, in fact we’re living in a surreal state in which people in coronavirus hotspots like New York City, where streets are empty and anyone in public is likely to be wearing a mask, can turn on the TV and see Floridians strolling on beaches in Jacksonville with nary a mask or glove in sight. The virus writes its own rules, and its uneven spread, combined with our federalist system of responding to it, means that even if science is speaking in a unified voice, we won’t all hear it at the same time.

So, are corona-shamers meeting an odd but necessary need right now with their scolding? The aggressive call-out culture that has been metastasizing on social media for years is not something we should encourage, nor, by contrast, is a world where shamelessness becomes a badge of honor. As Jon Ronson outlined in So You’ve Been Publicly Shamed when technology amplifies public shaming to the point of absurdity, shame ceases to serve its useful social function. (For his part, Ronson recently told the Guardian that he was “unsurprised” by how quickly a “Stasi-like narrative had emerged” around reporting lockdown violations).

But as we saw with the recent protests of state lockdowns in places like Austin, Texas, our new pandemic norms are being tested in realtime; so, too, are our impulses to shame.

That impulse rises when our efforts to assign blame for what is happening fall short, or when those to whom blame should be assigned (such as China’s communist party leaders) are too far removed for our shaming of them to have any immediate effect. No wonder we resort to railing about Donald Trump’s daily press briefings or tattling on our neighbors on Facebook.

In a highly individualistic, heterogeneous society, it’s challenging enough to understand and enforce social norms when things are going well. But in a pandemic, when fear and uncertainty are our everyday companions, it’s not ideal, but it is understandable, that all of us—the shamed and the shamers alike—might not be as generous or forgiving of each other as we ought to be. 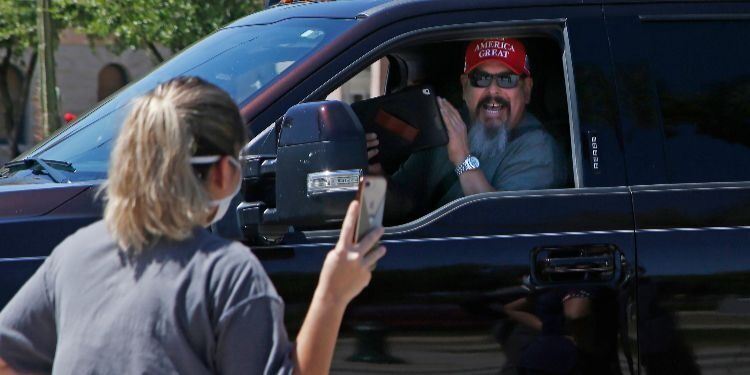