There are many insulting things one can call a female politician that have no male equivalent, but “ambitious” is not one of them.

And yet, feminist watchdogs have decreed that this word, along with other common descriptors such as “likable,” “qualified,” and “electable,” should be off-limits in news media coverage of Democratic vice-presidential candidate Sen. Kamala Harris.

Even before former Vice President Joe Biden announced Harris as his choice on Tuesday, representatives from a consortium of feminist groups, including the National Women’s Law Center, NARAL, Planned Parenthood, Emily’s List, and TimesUp, issued a statement that put the media on notice that certain criticisms, particularly about any women of color chosen as the Vice Presidential nominee, are not allowed. They call the effort “We Have Her Back.”

After genuflecting to the wave of wokeness that has overtaken newsrooms in the wake of the death of George Floyd, the statement says that the media should have a similar struggle session about how it describes women—and particularly women of color— candidates. “We believe it is your job to, not just pay attention to these stereotypes, but to actively work to be anti-racist and anti-sexist in your coverage,” the statement reads. In other words: objective reporting should be replaced by “actively” furthering the progressive narrative about race and sex.

Among the many journalistic practices now deemed off-limits: “Reporting on a woman’s ambition;” “Relationships with partners, staff, colleagues and donors” if such relationships “are characterized differently if the woman is not seen as subservient or supportive.” Also, “reporting on questions of electability of women, is, in itself, a perpetuation of a stereotype about the ability of women to lead,” and “reporting on and using pictures of a woman’s, particularly black women, show of anger at injustice or any other kind of passion in communication perpetuates racist tropes that suggest unfairly that women are too emotional or irrational in their leadership or worse ‘hate America.’”

Signers of the letter blanketed media with preemptive warnings about the likelihood that Harris (or other women being vetted, such as Susan Rice) would become the victim of “racist and sexist” criticism if nominated. And once Harris was chosen as Biden’s running mate, reporters quickly did the activists’ bidding. Critics who raise questions about Harris’ ability to connect to voters given her poor retail political skills during the primary season were met with responses like this one from former Hillary Clinton communications director Jennifer Palmieri, who claimed on MSNBC, “‘Phony’ is a very gendered term that we use to present women in power in an unfavorable light.”

After President Trump called Harris “nasty,” a descriptor the Washington Post noted last year he uses to describe both men and women, Post reporter Ashley Parker nevertheless saw the pernicious forces of sexism at work. “The way the attack lands, the nuances in connotation — is often different when the recipient is a woman,” Parker argued, “and different still when that woman is a person of color. Calling a woman nasty, say many experts and women in politics, is another way to deliberately dismiss and demean female politicians.”

The “experts” Parker consulted for her reporting, not surprisingly, are the same ones who issued the We Have Her Back Directive. “It really has become coded language for a woman, and it tries to put her in a place that is unacceptable to society,” Stephanie Schriock, president of Emily’s List, told Parker. Former Obama adviser and TimesUp board member Valerie Jarrett chimed in, “The words ‘nasty’ and ‘mean’ are much more pejorative when directed at a woman.”

It’s odd to see major media outlets and their reporters attempt to claim the moral high ground as anti-sexist watchdogs on behalf of Harris when, not that long ago, they relished playing bullies. In 2008, for example, no less a liberal darling than writer Ta-Nehisi Coates turned his sanctimonious lens on John McCain’s running mate, Alaska Governor Sarah Palin, decrying her “incredibly, thuggish stupidity” and “tribal neanderthalism” and calling her “insane” in The Atlantic.

Such excoriations of Palin, which would immediately be deemed sexist if applied to Har1ris, were so routine during the 2008 campaign that The Daily Beast columnist Matt Lewis felt compelled to remind his colleagues of them:

In case you’ve forgotten, a reminder is in order. Liberal radio and TV host Ed Schultz used the words “bimbo alert” when discussing Palin. Harry Reid’s press secretary described her as shrill.” Then-CNBC host Donny Deutsch spent lots of time talking about her “sex appeal.” And Martin Peretz of The New Republic said, “…she is pretty like a cosmetics saleswoman at Macy’s.”

The Republican National Committee’s spokesperson at the time, Liz Mair, recalled, “It actually was pretty deep-seated misogyny embedded deep within supposed progressives’ hearts and minds behind some of these attacks.”

As Lewis notes, even Biden joined in the objectification at the time, joking about Palin’s attractiveness, in obvious violation of We Have Her Back’s diktat that commenting “on a woman’s looks, weight, tone of voice, attractiveness, and hair is sexist news coverage.”

Of course, the media didn’t need to be warned by We Have Her Back to be nice to Harris; the New York Times announcement of her as Biden’s running mate occupied almost all of the space above the fold of the next day’s newspaper, which featured phrases like “achieving a first,” and descriptors such as “energizing,” and “political warrior” to describe her. Compare that to the Times coverage when Trump chose Mike Pence (a small item, below the fold, free of praise) or the perfunctorily-worded report on John McCain’s choice of Sarah Palin (“Alaskan is McCain’s Choice. First Woman on GOP Ticket”).

As Shaunna Thomas, the co-founder and executive director of UltraViolet, which launched the We Have Her Back campaign, described to the Washington Post, the group’s defense of Harris will be “multi-faceted.” It will also, evidently, be heedless of free speech, since it includes “engaging a research firm to identify images already being circulated online, and preparing to call on platforms like Reddit or Facebook to remove images as they emerge from the dark corners of the Internet.” Badgering social media platforms to de-platform those with whom you disagree is on-brand for Harris, who last year unsuccessfully demanded that Twitter ban Donald Trump.

Such performative outrage by Harris did not serve her well during the Democratic primaries. Its embrace now by her feminist surrogates on the left isn’t likely to help her during the general election either. They might claim to “Have Her Back,” but the public already has plenty of evidence of Harris’ potential weaknesses as a running mate, and of political media’s blatant partisanship and hypocrisy when it comes to women in politics. 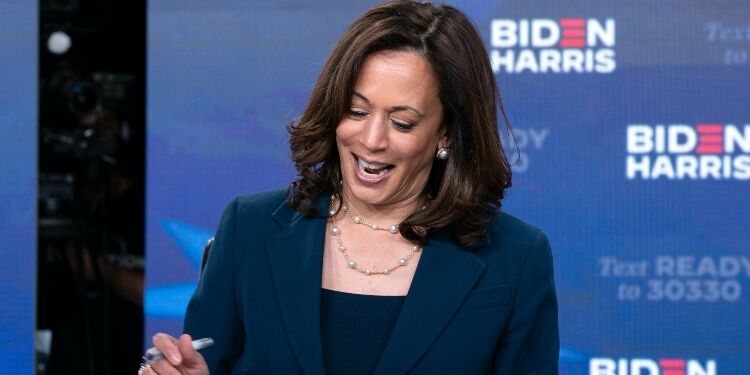