The demand that we “Believe all women,” an ideological mainstay of the #MeToo movement, has not aged well. It was always a tendentious claim, assuming, as it does, that women never make false allegations against men.

The often-repeated mantra is meant to encourage more women to come forward to seek justice when they have been the victims of assault. But the costs of adopting such a morally Manichean approach are all too clear, most recently in the case of Tara Reade, a former staffer for then-Senator Joseph Biden. Reade was one of several women who had previously expressed their discomfort with Biden’s physically demonstrative—that is, inappropriately handsy—approach to interactions with staff and constituents. Recently, however, she went further, claiming on a podcast that Biden sexually assaulted her in 1993 when she was a staffer.

She has not been met with the same rapturously supportive feminist embrace as other accusers of powerful men, such as Brett Kavanaugh accuser Christine Blasey Ford. Consider the markedly different responses of New York Times columnist Michelle Goldberg: She cast Ford as a hero, a woman whom she described as having endured Christ-like suffering for her brave willingness to testify against Kavanaugh (about events she had given conflicting accounts about and for which she had trouble recalling the details, but no matter). By contrast, Reade is described by Goldberg not as a brave hero but, at best, a nuisance who has given skeptics more reason to “troll the #MeToo movement.”

Goldberg is an opinion columnist and her egregiously partisan response is to be expected. But it is worth noting that it was not that long ago that anyone to the right of Goldberg who challenged the ideological position of “believe all women” when such charges were leveled against someone on the right, like Brett Kavanaugh, was immediately denounced as a victim shamer, a rape apologist, or an accessory to the crime of patriarchy.

So, what should we call mainstream media institutions like the New York Times when its reporters and editors slow-walk similar allegations when they are made against a prominent Democrat? It took the “newspaper of record” almost three weeks to cover Reade’s allegations against Biden, in stark contrast to the immediate and consistent attention it gave allegations (such as those made by former classmate Julie Swetnick, which also could not be corroborated) made against Kavanaugh.

When Times media columnist Ben Smith sat down with executive editor Dean Baquet this week to discuss the newspaper’s coverage of Tara Reade, something interesting happened. The Grey Lady suddenly discovered some grey areas when it comes to how it covers accusations of sexual assault.

For example, when Smith asked Baquet why the Times immediately covered the allegations about Kavanaugh while waiting to do the same for Biden, Baquet responded:

Kavanaugh was already in a public forum in a large way. Kavanaugh’s status as a Supreme Court justice was in question because of a very serious allegation. And when I say in a public way, I don’t mean in the public way of Tara Reade’s. If you ask the average person in America, they didn’t know about the Tara Reade case. So, I thought in that case, if the New York Times was going to introduce this to readers, we needed to introduce it with some reporting and perspective. Kavanaugh was in a very different situation. It was a live, ongoing story that had become the biggest political story in the country.

Well, yes, because the Times ran with it. As Robby Soave of Reason argued, “The accusations against Kavanaugh were a ‘running, hot story’ in part because the media covered them aggressively from the outset. Reade’s story might well be running and hot if the Times treated her as it treated Christine Blasey Ford.”

Worse, after admitting that the newspaper sat on the Biden story, Baquet confirmed that the Times had also altered the tone of the piece after publication to suit the demands of the Biden presidential campaign. A section of the story that read, “The Times found no pattern of sexual misconduct by Mr. Biden, beyond the hugs, kisses and touching that women previously said made them uncomfortable,” was deleted. When Smith asked about it, Baquet said, “Even though a lot of us, including me, had looked at it before the story went into the paper, I think that the campaign thought that the phrasing was awkward and made it look like there were other instances in which he had been accused of sexual misconduct. And that’s not what the sentence was intended to say.”

As Lara Brown, who directs the Graduate School of Political Management at George Washington University told a reporter, there is clearly a “higher standard for Tara Reade” than for Christine Blasey Ford. She credited partisan politics for the distinction without mentioning the power mainstream media institutions exercise in promoting such a double standard. “I think that is the nature of scandal in politics, that they are viewed through a partisan lens . . . The Democrats want someone who can beat Donald Trump, and to Democrats, all of Trump’s scandals are so far beyond the pale that maybe we don’t really know what’s happened with Biden,” she said.

As the Times’ response to the allegations against Biden demonstrates, the “believe all women” trope, when filtered through a partisan lens, enables a kind of professional hypocrisy by mainstream media outlets that undermines trust in their reporting.

Taking sexual assault seriously does not mean we must believe all women (even the Times has given space to its own writers to make this argument). But media outlets should be held responsible when they compromise their own often-touted standards of evidence for clearly partisan reasons. Reade’s claims raise some of the same credibility questions that dogged Blasey Ford’s allegations, but her claims should be scrutinized, as they should be for anyone who makes such serious allegations against a public figure.

Instead, “believe all women” has now morphed into a way to publicly shame people with whom you politically disagree. Recall actress Alyssa Milano, who at the outset of the MeToo movement told the Guardian, “You don’t have to tell your story, you just have to say ‘me too’.” Now that Biden is in the crosshairs, she has embraced the merits of due process and nuance.

She’s right to finally acknowledge the necessity of due process, but she’s also a ridiculous hypocrite, as is Dean Baquet. If your standard for investigating public figures accused of sexual assault is as partisan and malleable as it appears to be for some celebrities and for editors at the Times, where “believe all women” only applies when the accused is someone from the opposite political party, then the phrase is merely hollow moral posturing.

The presidential election will not be decided on allegations of sexual assault made against Biden or Trump; it will be a referendum on Trump’s handling of the current pandemic. But that doesn’t mean we should memory-hole episodes like the Times’ handling of Tara Reade, any more than we should downplay the serious allegations of assault that have been made against President Trump, as some Trump-supporting journalists have done for years.

If the Times wants to squander its purported journalistic independence to provide political cover for Biden, so be it. But long after the 2020 election is over, its readers should remember that in doing so it revealed a hypocrisy whose long-term effect is a lot more worrisome than propping up their preferred presidential candidate: it has fostered a cynicism about allegations of sexual assault made against any public figure, which further discourages women from coming forward when they have been victimized. With a big assist from the Times, the MeToo movement just trolled itself. 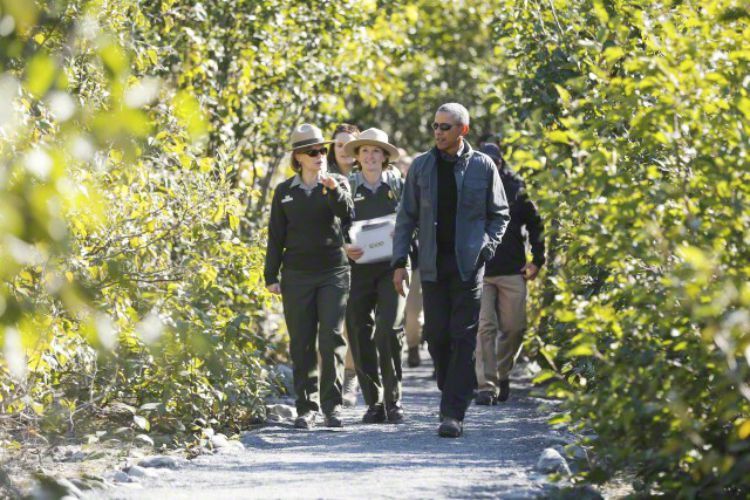 Of Photo-Ops, Glaciers, and Climate Change