After Hillary Clinton lost to Donald Trump in 2016, mainstream media outlets tried strenuously to make sense of what happened. One narrative quickly emerged: sexism. Hillary lost because Americans can’t stand women in power, we were informed. (Oddly, during the campaign we were told that, if she won, it would also usher in “the kind of down-and-dirty public misogyny you might expect from a stag party at Roger Ailes’s house,” but no matter.)

Yet no amount of media pandering to Pantsuit Nation could alter the fact that Hillary was a uniquely awful candidate. There’s a reason 53 percent of white women voted for Donald Trump, and it’s not because they were all gender traitors. If Americans are so sexist, why did many of them in battleground states like Pennsylvania cast their vote for a different woman, Green Party candidate Jill Stein? And if sexism unfairly hobbled Hillary, why did she manage to best Trump in the popular vote? (Alas, annoyed liberals, you still need the Electoral College to win.)

Despite these pesky facts, the sexism narrative has persisted. Today it’s being updated for 2020, as a front-page story in the New York Times suggests. With six Democratic women already announced as candidates for the presidency, the Times story implies, we’re going to see non-stop sexism on the campaign trail.

Or will we? The Times article relies for its evidence on thin research (one study cited in the piece was an online questionnaire sent to 310 people) and an overreliance on the opinions of a “gender expert” who works for the Barbara Lee Family Foundation. Its 2016 Presidential Gender Watch report argued that even though an overwhelming majority of Americans in 2016 reported being ready for a female president (8 in 10 Americans according to one poll), the country still suffers from something called “aversive sexism,” where “discriminatory beliefs or behaviors are justified on the basis of factors other than gender.”

The only problem? It’s not true and hasn’t been for some time. Researchers have found no evidence of systematic sexism or bias against female candidates running for office. When women run, they “win elections at the same rates as men,” as historian Nancy Cohen has documented. Scholars such as Dartmouth professor Deborah Jordan Brooks have found no evidence of sexist attitudes or biases undermining female candidates. “I do not find any evidence that the public makes less favorable underlying assumptions about female candidates, nor do I find that the public has more challenging rules for the behavior of women on the campaign trail,” she writes.

Brooks’s research focused on female politicians at the legislative level, but her findings have implications for female presidential candidates. She notes, “if women were significantly held back by gender stereotypes at the presidential level today, it would also be reasonable to expect to find at least some evidence of that dynamic at other levels, and yet my study finds none.”

As for voters? They’re driven by partisanship, not sexism. Political scientists such as Danny Hayes and Jennifer Lawless found “no evidence whatsoever that voters are biased against female candidates.” Nor do voters turn against women who aren’t traditionally feminine on the campaign trail. Brooks found that voters did not think less favorably of female politicians who demonstrated toughness as leaders; in fact, they thought such women were more likely to be effective.

And when voters do acknowledge differences between men and women, those differences advantage women, not men. A 2018 Pew Research survey found, “Majorities of Americans see little difference between men and women on a range of specific qualities and competencies that may be required for effective leadership. Among those who do see a difference, however, women are perceived to be stronger in most areas in both politics and business.”

Similarly, the “likability” issue with regard to female candidates is wildly overblown. It’s understandable that disappointed Hillary supporters want to see “likability” as merely sexism-in-disguise (denial is a powerful thing), but it’s simply not backed up by evidence. What it is backed up by is a media narrative that keeps raising the issue of likability and then claiming it’s sexist to do so.

Promoters of the likability-as-sexism narrative tend to cite not scholarly research, but the musings of activists, like the “gender and women’s rights consultant” who complains: “The discussion around a woman presidential candidate’s ‘likability’ is an updated, #MeToo-era adaptation of discussing a woman’s looks or clothes. It’s a thinly veiled attempt at tearing someone down because they don’t conform to rigid, limiting standards of gender-specific behavior.” In fact, the research on likability paints a more complicated picture—and much of it is focused on women in the workplace, not in politics.

Unlike Kamala Harris, whose recent tempest-in-a-Tupac comments on a radio show harmed her credibility, and Elizabeth Warren, who looked painfully awkward with her beer-swilling attempts to look like a relatable everywoman on Instagram, politicians (male and female) would do well to ignore likability and just focus on the issues. Likability is a game with no winners; does no one recall the disastrous TheHillaryIKnow.com website the Clinton campaign set up in 2008 to try to make her seem more likable?

Despite all evidence to the contrary, claims that women in politics face an unfair and sexist process are likely to continue. To a mainstream media committed to identity politics, everything must be interpreted through the prism of an ism—in this case, sexism. Which is why perceptions about women’s leadership opportunities are often far more negative than their opportunities in reality, as the Pew Survey found. As more women vie for the highest office in the land, the media should give them the chance to craft their own narratives—and give voters the facts, not their inaccurate assumptions about sexism. 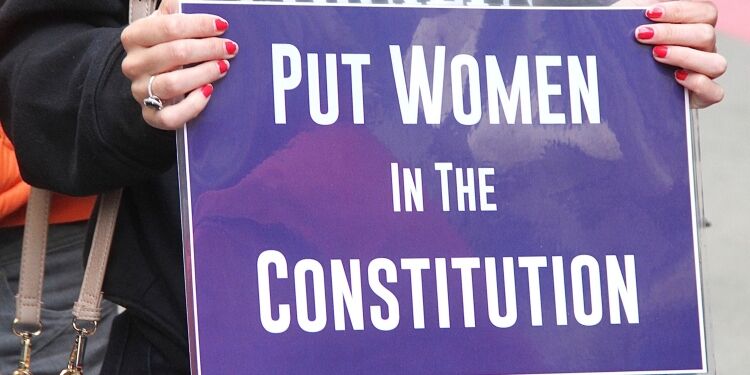