Among the many speakers during last week’s Republican National Convention, Ann Dorn stood out for the raw emotional power of her message about the consequences for ordinary people when law and order break down.

Mrs. Dorn is the widow of St. Louis police captain David Dorn, who was murdered in June while trying to protect a store from looters during the protests that followed the death of George Floyd. She decried the “callousness” of the protestors and looters and said, “Violence and destruction are not legitimate forms of protest. They do not safeguard black lives: they only destroy them.”

Earlier that day, National Public Radio took a far different approach to looting. In an interview with Vicky Osterweil, who has just published a book with the title, In Defense of Looting, NPR downplayed concerns about violence and looting as “handwringing” and instead gave a platform to someone who believes that “looting is a powerful tool to bring about real, lasting change in society. The rioters who smash windows and take items from stores . . . are engaging in a powerful tactic that questions the justice of ‘law and order,’ and the distribution of property and wealth in an unequal society.”

Osterweil takes pains to clarify that her defense of looting doesn’t cover home invasions, but rather “the mass expropriation of property, mass shoplifting during a moment of upheaval or riot.” She’s a fan of the practice: Looting “does a number of important things,” she argues. “It gets people what they need for free immediately, which means that they are capable of living and reproducing their lives without having to rely on jobs or a wage.”

She goes on to praise looting by black people as especially positive, since it attacks “white supremacy,” and says, “I think that’s a part of it that doesn’t really get talked about—that riots and looting are experienced as sort of joyous and liberatory.”

And the lives of men like David Dorn, who was killed by all those “joyous and liberatory” looters she praises? Osterweil simply ignores such killings, arguing, “In terms of potential crimes that people can commit against the state, it’s basically nonviolent. You’re mass shoplifting. Most stores are insured; it’s just hurting insurance companies on some level. It’s just money. It’s just property. It’s not actually hurting any people.”

She isn’t the only one arguing that looting isn’t merely harmless, but positive. Earlier this summer, after looters ravaged retail stores around Manhattan and violent street crime rose precipitously, Rep. Alexandria Ocasio-Cortez rationalized criminal behavior by claiming that those who engaged in it were probably just in dire need of food and so needed to “shoplift some bread.”

A similar process of denial about criminal misconduct has been occurring among Black Lives Matter activists and their supporters. The reason the world hears the name of George Floyd more than it does David Dorn is that Black Lives Matter immediately elevates to secular sainthood people like Floyd, Rayshard Brooks, and Jacob Blake, while ignoring men like Dorn.

Unlike Dorn, however, these men lived troubled lives, and some of them were not good people; all of them had histories of violently abusing women and children, for example. That doesn’t excuse any mistreatment they might have suffered at the hands of law enforcement, but it doesn’t erase it either. And yet, George Floyd was buried in a gold casket that was driven by a horse-drawn carriage from his large, televised, celebrity-filled funeral—at a time when hundreds of thousands of Americans were not allowed to bury their own family members because of the coronavirus pandemic. It should be possible to discuss the issue of police brutality without elevating these men to the status of blameless martyrs.

But BLM’s valorization of men like Floyd and, more recently, Jacob Blake, is purposeful: It furthers the narrative that any black person killed by law enforcement was targeted because of his or her race rather than his or her conduct. And yet, plenty of people who are not black have met the same fate as men like Floyd, Brooks, and Blake. What they all share is similar behavior—attacking police officers or aggressively resisting arrest. Yet, to date, there has not been a single protest or riot on their behalf; no presidential candidates have used them as examples of systemic injustice; none of them have had murals of their faces painted on buildings or celebrities flocking to their funerals, even though they vastly outnumber the black people killed by police officers.

Or consider BLM’s silence about Jacob Blake’s actions the day he was shot by police. The video of Blake’s shooting that prompted continued rioting in cities across the country didn’t provide any context, such as the fact that the car with children in it that he was moving toward wasn’t his (he had stolen the keys); or that there was an open warrant for his arrest for felony sexual assault; or that he had a knife in his hand when he refused to obey the officers’ directions and, according to the Kenosha Professional Police Association, continued to resist arrest (and put one officer in a headlock) even after being tased. Before the fateful seconds shown on the video, police officers had made many attempts at verbal and non-lethal means to stop Blake.

None of that mattered, of course. Once Blake was declared an innocent victim by BLM, all other conversation about how he is also a confirmed, violent abuser of women was shut down. It allowed activists to riot and destroy and decry “systemic racism” while avoiding answering the question: Should law enforcement have allowed a violent, wanted man to drive off in a stolen car with three children in it? Should they have refused to execute a warrant for his arrest because he was a black man?

BLM’s hero-making on Blake’s behalf gives activists permission to ignore such questions and the fear and suffering of the women Blake abused. Instead, they raise millions of dollars for him on GoFundMe. NFL players are even putting the name of an accused sexual assaulter on their helmets in solidarity.

We are now living in a surreal moment when you can hear defenses of violent looting on a taxpayer-funded national radio program; you can find large groups of protestors marching in the streets declaring their intention to “protect black criminals,” as the DC chapter of Black Lives Matter did this week on the anniversary of the 1963 March on Washington; you can watch videos of ordinary people (and U.S. senators) being surrounded and harassed by angry mobs when they refuse to kowtow to their demands.

If looting is virtuous rather than criminal behavior, it’s not something that needs urgently to be stopped, and its victims don’t matter. If criminal behavior is heroic, then we limit our ability to engage with crucial questions about how law enforcement can and should be reformed (and instead simply demand the end of policing). If demonstrations that lead to destruction and death are “mostly peaceful,” then language, and consequences, mean nothing.

What we call things has an impact on what we are willing to do about them. The power of the slogan “black lives matter” (as opposed to the BLM organization) is that it insists we face the ways in which our nation has failed some of its citizens, come together, and do something about it. That message is being undermined, day by day, by the actions of its supporters. 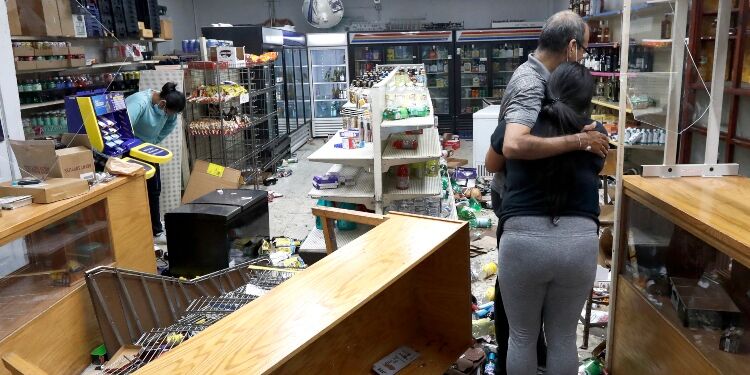