Should Felicity Huffman, one of the parents arrested in the Operation Varsity Blues college bribery scandal, who pleaded guilty to paying college “consultant” William Singer $15,000 to boost her daughter’s SAT score, go to jail?

Surprisingly, in an era of polarization and disagreement, public opinion on this question seems nearly unanimous: Yes! Even the often-divided ladies of “The View” agreed that Huffman’s celebrity and apparent contrition shouldn’t discourage U.S. District Court Judge Indira Talwani from sentencing Huffman to jail time. As the prosecutors in the case noted, “Some period of incarceration is the only meaningful sanction for these crimes.” They recommend one to fifteen months in prison and a $20,000 fine.

Hopefully, the judge will err on the side of a long sentence and a much heftier fine.  Why?

As the prosecutors argued, “Huffman’s conduct was deliberate and manifestly criminal; it was wrong, she knew it was wrong, and she actively participated in manipulating her daughter’s guidance counselor, the testing services and the schools to which her daughter applied.” Huffman (and her husband, actor William Macy, who must have known what was going on but for some reason was not charged) demonstrated a brazen disregard for the rules of the admissions game.

Because, of course, the college admissions process is a game. Wealthy and well-connected people have long used their money and access to power to persuade colleges to admit their children (and grandchildren). In combination with affirmative action applicants and athletes and legacy admissions, there are a lot of people competing for a finite number of unspoken-for spots in freshmen classes, particularly at the most prestigious schools.

This was evidently the reasoning Ms. Huffman used to justify her own criminal actions. According to the Hollywood Reporter, “Singer told Huffman her daughter would face worse admission odds because she wasn’t a legacy, an athlete or the child of a major donor and their efforts would level the playing field.” In a statement to the judge, Huffman presents herself as a panicked and fearful mother just trying to do what’s best for her child. “In my desperation to be a good mother I talked myself into believing that all I was doing was giving my daughter a fair shot,” Huffman wrote.

And yet, for all of her claims that she now understands the gravity of her actions, Huffman’s plea for leniency from the court suggests someone who is still trying to justify her actions by blaming the system, and whose moral reasoning has perhaps been compromised by spending her adult life in a bubble of privilege.

Her statement to the judge, which at times reads like a dramatic screenplay, attempts to hit the right emotional notes by portraying Huffman as a sympathetic 21st Century everywoman: the stressed-out mom just trying to do right by her child. Huffman claims her daughter has learning disabilities, which contributed to Huffman’s anxieties about whether her daughter could perform well on the SAT. “As warped as this sounds now, I honestly began to feel that maybe I would be a bad mother if I didn’t do what Mr. Singer was suggesting,” Huffman wrote.

Parents in affluent zip codes like the one where Huffman lives have exploited the accommodation given to students with disabilities by having them falsely diagnosed by unscrupulous doctors so that they can gain the advantage of having more time to take standardized tests. It’s not clear if this was the case with Huffman’s daughter, but it’s something the judge should question during her assessment of Huffman’s claims.

As well, the judge should consider a sentence with a heftier fine. Contrary to what Ms. Huffman implies, this was not a victimless crime. Huffman was happy to deny another student with qualifying SAT scores a spot in a college freshman class. Why not levy a fine at least commensurate with the cost of the crime, such as the estimated cost of four years of private college?

Finally, the judge should not be swayed by Ms. Huffman’s attempts to play the victim of either Mr. Singer or our over-the-top parenting culture.

In her statement, Huffman portrays Singer as a compelling con man and herself as a too-trusting mark. But it was the college admissions officers who were the marks here. Huffman justified the hustle because she believed her daughter was a potentially talented actress who deserved something that she shouldn’t have to earn. Huffman inadvertently admitted as much. “I didn’t want my daughter to be prevented from getting a shot at auditioning and doing what she loves because she can’t do math,” she confessed.

Huffman also wants credit for having had qualms about what she did (or so she claims) and for deciding not to repeat the same fraud with her second daughter’s SAT. This is a classic grifter’s defense. Don’t punish me harshly for the con I almost got away with; reward me with leniency for the fact that I didn’t do it again.

Lots of mothers are frightened that they will make missteps as parents; it’s part of being a parent. Few of us have the comfort of a multi-million-dollar fortune like Huffman’s to purchase tutors, therapists, enriching activities, and lessons for our children to alleviate our anxieties. Every parent has moments of worry about whether they are doing everything possible to give their children the best opportunities. Not every parent methodically engages in fraud to guarantee the expected outcomes from those opportunities.

Huffman, like many of the parents charged in the Varsity Blues scandal, is not a naive person who just wanted to do well by her daughter. She’s a sophisticated member of the elite who, by her own admission, was surrounded by other sophisticated people who engaged in a conspiracy to game the system. Even if Huffman is genuinely remorseful about what she did (as opposed to being sorry she was caught), it’s important to distinguish the public humiliation and social fallout she’s suffered from the appropriate punishment for fraud. Shame shouldn’t count toward time served.

These are strange days for the country’s elites. If the Varsity Blues scandal is any guide, their place in the world doesn’t just breed a toxic sense of entitlement. It generates a level of anxiety about failure powerful enough to persuade even privileged people to behave in desperate ways. By attempting to leave nothing to chance when it comes to college admissions, they don’t just undermine trust in the college admissions process; they demolish the bond of unconditional acceptance and love that should exist between parents and children.

There was real pain expressed in Huffman’s statement to the judge, but it wasn’t her own. It was her daughter’s reaction when she found out what her mother had done. “Why didn’t you believe in me?” she asked. “Why didn’t you think I could do it on my own?” Huffman doesn’t have an answer to that question in her statement to the judge. Perhaps some time in a prison cell will help her find one. 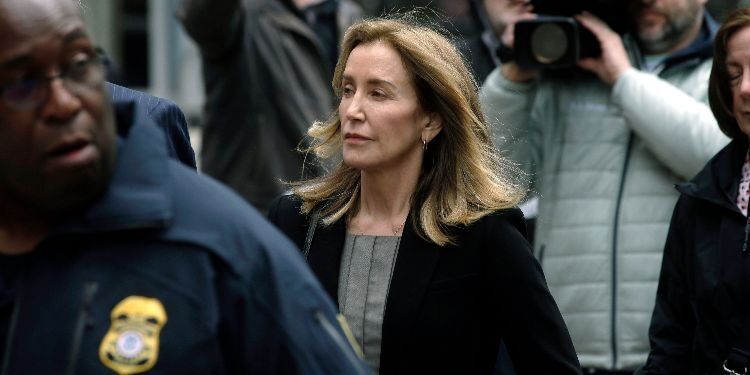