When the U.S. Women’s Soccer Team won the Women’s World Cup last summer, they were hailed as hard-working role models for young women everywhere, feted with parades and a stream of well-deserved, positive press coverage for their accomplishments.

But these same victors also claimed to be victims of pay discrimination by their league. They had filed a federal lawsuit a few months before the World Cup finals alleging violations of the Equal Pay Act and Title VII of the Civil Rights Act. That’s why a float in their New York City victory parade (on which Governor Andrew Cuomo was also a guest) featured a banner reading, “Parades are cool; equal pay is cooler,” and many of the players chanted “equal pay!” as the parade made its way through the city.

But last Friday, a federal judge ruled against the team’s pay discrimination claim, asserting that it wasn’t compelling enough to proceed to trial. In fact, Judge R. Gary Klausner wrote in his ruling that, from 2015-2019, “the WNT [Women’s National Team] both played more games and made more money than the MNT [Men’s National Team].”

That’s because the collective-bargaining agreement that these women themselves negotiated with the league privileged a stable, guaranteed pay structure rather than the riskier, but potentially more lucrative, pay-per-game structure the men’s team pursued. The women agreed to contracts that included guaranteed salaries, severance pay, medical benefits, and some bonuses; the men to pay-for-play and strictly performance-based contracts, with none of the guaranteed benefits enjoyed by the women’s team. As the Wall Street Journal noted, the judge reminded the women’s team that they had “explicitly rejected the terms they now seek to retroactively impose on themselves.”

But the judge’s ruling creates a new challenge for the women’s team with regard to their P.R. strategy. Their mantra demanding equal pay was what inspired fans. “Equal per diem and travel budgets” might not have quite the same rallying effect.

The ruling also undermines another key aspect of their P.R. strategy. The Women’s National Team promoted themselves as underdogs who were denied opportunities by a male-dominated league that doesn’t take them seriously despite their winning record. The women claimed in their lawsuit that they are owed $67 million in back pay. The judge’s ruling makes strikingly clear that this is a ridiculous claim, especially given that they negotiated the terms of their payment structure themselves. The women have vowed to appeal the ruling, but they face a new challenge in persuading the public that justice has somehow been denied them.

Or maybe not. As Gabe Feldman, a sports law professor at Tulane University, told the Wall Street Journal, “It’s hard (for U.S. Soccer) to be painted as the good party when you are battling this group of women in court.”

That’s an understatement given how the mainstream news media and prominent Democratic politicians from Elizabeth Warren and Hillary Clinton to Kamala Harris and Kirsten Gillibrand have beaten the drum on behalf of the team’s equal pay claims for more than a year. That boosterism doesn’t seem to have weakened in the face of their legal defeat. After the judge’s ruling, CBS News posted a tweet that read more like a press release for the team than a dispassionate analysis of their legal setback. “The U.S. women’s national soccer team has won four World Cups, four Olympic gold medals and outranks the men’s team, but a judge dismissed the players’ claims they deserve equal pay,” the journalistic institution averred. “Now, the team is continuing its fight against gender discrimination.”

Others who had uncritically embraced the team’s claims about pay discrimination and were now incensed by the judge’s ruling included Democratic presidential candidate Joe Biden who threatened U.S. Soccer in a tweet that said, “equal pay, now. Or else when I’m president, you can go elsewhere for World Cup funding.”

Not coincidentally, one of the team’s biggest stars, Megan Rapinoe, had recently interviewed Biden on Instagram, joking (at least I hope she was joking) that she could be his Vice President.

By contrast, U.S. Soccer was muted about its legal victory, issuing a statement praising the women’s team and saying, “We look forward to working with the women’s national team to chart a positive path forward to grow the game both here at home and around the world,” and noting that the league was committed to ensuring that “our women’s national team remains the best in the world and sets the standard for women’s soccer.”

The women’s team was “shocked and disappointed” by the ruling, according to their spokespersons. Their disappointment is understandable, but if they’d spent more time re-reading the details of their own pay agreement with U.S. Soccer rather than their fawning press, they might not have been shocked. 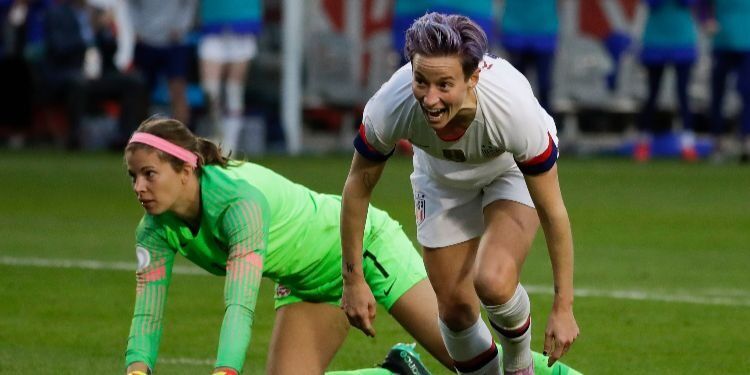