One piece of evidence was a poll published two weeks before Independence Day showing that 74 percent of Israeli Arabs feel “comfortable” in Israel–an astounding figure for members of a minority whose kin have been at war with their country since its inception. Another was the unprecedented effort by Haredim (ultra-Orthodox Jews) to mark Israel’s Memorial Day, which they have traditionally shunned.

The poll, conducted by the Jewish People Policy Institute, asked how comfortable people felt “being themselves” in Israel. Fully 74 percent of Arab respondents said they felt comfortable or very comfortable, not dramatically below the 88 percent of Jews who said the same. This is clearly a resounding refutation of the increasingly popular narrative that Israel is a racist country. It’s hard to imagine any minority feeling “comfortable being themselves” if they truly suffered from unrelenting racism. It’s also a testimony to Israel’s efforts to make its Arab minority comfortable by promoting integration, which most Arabs want, without assimilation, which they don’t.

Integration means access to educational and employment opportunities. And, as I’ve detailed before, this is something both governmental and nongovernmental agencies have increasingly been trying to promote. To give just one recent example, students from the Bedouin town of Hurra were among the 80 high school students who built a nanosatellite and launched it to the International Space Station last month. This was part of an international project whose local version was sponsored by the Israel Space Agency and the Herzliya municipality (Israel, incidentally, was the only participating country whose nanosatellite was built by high school students rather than college students).

Assimilation means adopting the majority’s culture, language, and religion. And far from demanding that Israeli Arabs do so, Israel actually helps them to preserve their distinct identity, except when it comes to participating in or verbally supporting anti-Israel activities. For instance, most Israeli Arabs attend government-funded public schools where Arabic is the primary language of instruction, and the curriculum includes Arab history, literature, and culture. Similarly, the government funds Muslim and Christian religious institutions. And unlike Europe, Israel doesn’t infringe on Arab religious mores by, for instance, imposing dress codes on civil servants or banning separate-sex swimming in public facilities.

As I’ve explained before, this tolerance exists not despite but because of Israel’s Jewish identity: Israeli Jews want to maintain their own unique religion and culture rather than dissolving into generic Western cosmopolitanism, and therefore, they are also supportive of Arabs’ desire to preserve their distinctiveness. This willingness to facilitate integration without assimilation is what enables most Israeli Arabs to feel “comfortable” in Israel, and even enables a smaller majority (51 percent) to say they are proud to be Israeli, as another poll released this week showed. In short, even though anti-Israeli extremists still abound, most Israeli Arabs are slowly moving toward the vision enunciated by Israeli Arab diplomat George Deek:

We can be proud of our identity and at the same time live as a contributing minority in a country who has a different nationality, a different religion, and a different culture than ours. There is no better example in my view than the Jews in Europe, who kept their religion and identity for centuries but still managed to influence deeply, perhaps even to create, European modern thinking.

No less significant is the movement within the Haredi community. I’ve written before about the growing number of Haredim who work, attend college, serve in the army rather than engaging in lifelong yeshiva study. But all these welcome changes could easily stem from self-interest rather than any desire for rapprochement with mainstream Israeli society. In contrast, self-interest cannot possibly explain the changing attitudes toward Memorial Day.

Haredim traditionally had two problems with Memorial Day, which falls one day before Independence Day. First, it’s an Israeli holiday rather than a Jewish one, and therefore uncomfortable for a community whose leaders have long viewed the secular Jewish state and its army with suspicion and even hostility. Second, many of the day’s specific observances–like the siren heralding a moment of silence or the wreaths laid on graves–were imported from non-Jewish culture. Haredim, reasonably enough, feel a Jewish state should mark its mostly Jewish dead in a more Jewish fashion.

This year, however, was notably different. Although the main Haredi newspapers continued to ignore Memorial Day, leading Haredi websites and radio stations devoted extensive coverage to it, including feature stories on Haredi soldiers who fell in battle. Every Knesset member from the more moderate Haredi party (Shas) planned to attend Memorial Day ceremonies, and the head of the more extreme Haredi party (United Torah Judaism) even served as the state’s official representative at one such ceremony, down to laying a wreath at a military cemetery. Once, the Haredi community would have deemed this beyond the pale. Today, it poses no threat whatsoever to Yaakov Litzman’s political future.

Like Israeli Arabs, Haredim have no interest in assimilating into mainstream culture. And as in the Arab community, anti-Israel extremists haven’t disappeared. But increasingly, Haredim seek to integrate while retaining their own culture, and thereby to make their own unique contribution to the Jewish state.

Both developments are excellent news for Israel. And they were definitely something to celebrate on Independence Day. 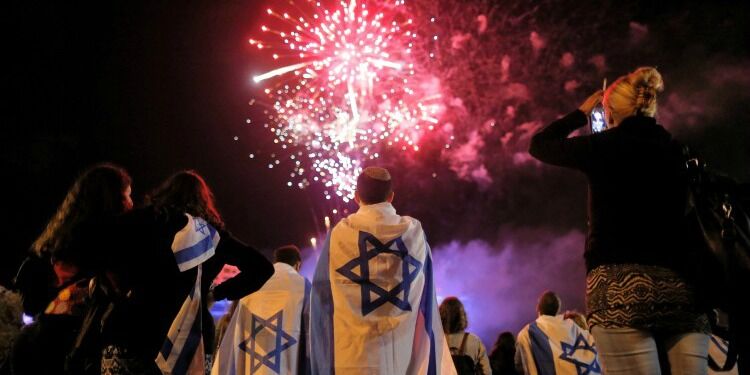