A few weeks ago, the security threat Israel faced from Palestinian terror looked relatively low. But then Barack Obama and John Kerry decided to meddle. The consequences were eminently predictable: They got to enjoy feeling self-righteous, while Israelis and Palestinians pay the price in blood.

Here’s what things looked like a few weeks ago: The lone-wolf Palestinian terror attacks that were proliferating a year ago had largely died down since most Palestinians had concluded (correctly) that they weren’t accomplishing anything. Rocket attacks from Gaza were at their lowest point in 11 years, with only 15 rockets fired in all of 2016, down from 24 in 2015. Moreover, the fact that just 39 rockets were fired in the two years following the Gaza war of 2014 showed that this war had created far greater deterrence than its predecessors. By comparison, 261 rockets were fired in the two years after the 2009 war and 412 in the two years after the 2012 war. And if further proof were needed of the war’s deterrent effect, there was Hamas’s bizarre offer last month to share its homemade rockets with anyone willing to use them against Israel–a clear indication that it had no intention of waging its own war anytime soon. If it did, it would be stockpiling its rockets rather than trying to hawk them.

But by last week, things looked very different. Israeli defense officials reported a sharp upsurge in attempted Palestinian attacks–primarily rock-throwing, but there was also a deadly car ramming in Jerusalem that killed four soldiers and wounded 16. In a highly unusual statement, the officials noted that this rise had occurred in the two weeks since the UN Security Council passed a resolution condemning Israeli settlements on December 23. And while the increase was partly attributable to the Palestinian exam season (when more teens are out throwing rocks because regular classes are canceled), it was much steeper than the usual exam-period spike.

That this upsurge occurred immediately after the UN resolution is no coincidence. Defense officials obviously can’t spell out the causal connection. It would be highly unseemly for them to accuse the Obama Administration of fomenting anti-Israel terror. But a commentator is subject to no such restraints, so let me explain.

In the months preceding the resolution, the international community had started paying more attention than ever before to the way the Palestinian Authority incites and encourages terror. For instance, a July report by the Quartet (comprising the U.S., UN, EU and Russia) infuriated the PA by including an unequivocal condemnation of PA incitement, complete with examples. Even more significantly, the British government announced last month that it was putting new restrictions on aid to the PA because of its payment of salaries to imprisoned terrorists, while the U.S. Congress is considering slashing aid to the PA for the same reason. Since the PA is already facing serious funding shortfalls, these were worrisome developments. Consequently, it had begun ratcheting its anti-Israel incitement ever so slightly downward.

But then came the UN resolution, followed by Kerry’s speech on the peace process five days later, and the PA realized it no longer had to worry about incitement: The good old days, in which the world blamed Israel alone for the absence of peace, were back. The resolution–which wrongly deemed the settlements both illegal and an impediment to peace and demanded that all states take punitive action against them by distinguishing, “in their relevant dealings, between the territory of the State of Israel and the territories occupied since 1967”–didn’t utter a word of criticism of the Palestinians. True, it included a generic condemnation of incitement and terror, but without any mention of who was perpetrating said incitement and terror, allowing the Palestinians to claim that even this section was aimed solely at Israel. Kerry then reinforced the message by devoting the lion’s share of his speech to the settlements, with Palestinian incitement and terror coming only a distant second.

Consequently, the PA felt free to ramp its incitement back up to full force. And it did, to deadly effect.

Shortly before the resolution passed, for instance, a Jerusalem Post reporter who asked more than two dozen east Jerusalem Palestinians what they thought of reported plans to move the U.S. embassy from Tel Aviv to Jerusalem couldn’t find a single one who cared. But then the PA, bolstered by the resolution and Kerry’s speech, ordered all imams under its control to devote their sermons on Friday, January 6 to why the embassy move was unacceptable and would/could/should lead to violence. After all, the world could hardly object to that. Kerry himself had said exactly the same thing. And on January 8, an east Jerusalem Palestinian carried out the car-ramming that killed four soldiers. His relatives said he did so after hearing a local imam assail the proposed embassy move in his Friday sermon.

But Palestinian incitement isn’t just deadly to Israelis; it’s even deadlier to Palestinians. Whenever violence breaks out, Palestinians always end up with the higher death toll; that’s inevitable, given Israel’s superior weaponry. Unfortunately, that has never yet deterred the Palestinian leadership from fomenting it. Thus, by reassuring the PA that it will face no international consequences for inciting, the Obama/Kerry team guaranteed bloodshed on both sides.

Two and a half years ago, I detailed how another Obama/Kerry effort to promote Israeli-Palestinian peace ended up sparking a war instead. But either they learned nothing from that fiasco, or they simply don’t care how many Israelis and Palestinians die for the sake of enabling them to posture self-righteously on the world stage. After all, they’ll be out of office at the end of the week. Israelis and Palestinians will still be here bleeding. 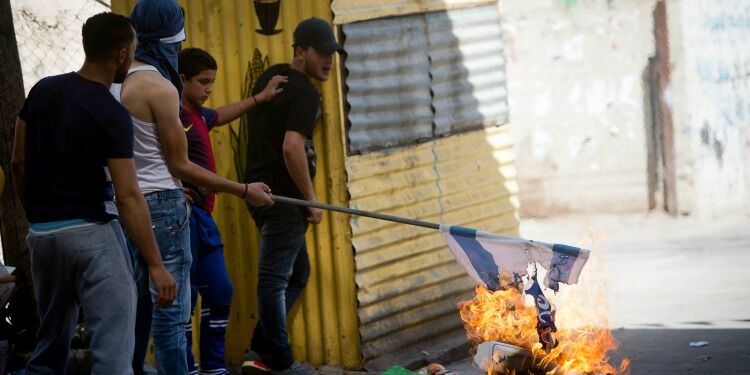