BDS activists are presumably celebrating the UN Human Rights Council’s decision to warn off companies that do business with Israelis in the West Bank. I’d advise them to enjoy their temporary victory while they can. As several recent events make clear, they’re losing badly outside the UN. And they’re losing for one simple reason: People worldwide are gradually coming to understand that the boycott, divestment, and sanctions movement isn’t “anti-occupation,” it’s anti-Semitic.

Last Friday, for instance, Austria’s national student union passed a motion denouncing BDS as anti-Semitic and saying the movement recalls the Nazis’ economic boycott of Jewish businesses. The resolution also said BDS activists shouldn’t be given funding or venues in which to promote its campaign. The motion, which was pushed in particular by a student group called GRAS (Greens and Alternative Students), passed almost unanimously, with one abstention and no votes against.

The previous week, the Green Party in the German state of Bavaria passed a resolution denouncing BDS as “anti-Semitic, hostile to Israel, reactionary and anti-enlightenment,” adding that it “reproduces the National Socialist slogan, ‘Don’t buy from Jews!’” The resolution, introduced by the party’s youth wing, also urged the national Green Party not to cooperate with BDS. Given that some prominent Green Party members have actively promoted anti-Israel boycotts, this uncompromising denunciation effectively amounts to a grassroots revolt.

And this week, the Left Party in Germany’s most populous state, North Rhine-Westphalia, decided not to consider a motion urging Israel “to end the occupation and the Gaza blockade” and demanded the European Union end its Association Agreement with Israel due to the blockade and Israel’s West Bank security fence. Given that the Left Party (Die Linke in German) is easily the German party most hostile to Israel, this development is surprising.

The party offered no explanation when it announced the decision on its Twitter account, but Jerusalem Post reporter Benjamin Weinthal suggested it might be related to what Martina Renner, a Left Party member of parliament, said about the resolution earlier this month. The “motion sounds like it was written from Israel boycott groups,” Renner said. “From this the executive board of @dielinke clearly distances itself.” Renner’s statement left no room for doubt: Even the Left Party wants nothing to do with BDS and anti-Israel boycotts.

All these examples have something in common: The anti-BDS push is coming precisely from the groups that are normally least sympathetic to Israel–leftists and young people. In other words, BDS is losing not just among groups that could be expected to oppose it, like the U.S. Congress, but among the very demographic that ought to be its principal bastion of support.

Of course, even many people who oppose boycotting Israel as a whole still think boycotts are acceptable as long as they target the settlements alone. The problem, as the UNHRC blacklist makes glaringly obvious, is that this isn’t actually possible.

One of the companies that received a UNHRC warning letter this week, for instance, was Bezeq, Israel’s largest telecommunications company. Why? Because Bezeq provides telephone and internet service to the settlements. Nor is Bezeq unique; many of Israel’s largest companies provide services to the settlements, including the banks, the Mekorot Water Company, the Israel Electric Corporation, and all cell phone operators, because physical and economic infrastructure companies are expected to provide service to all Israelis.

Moreover, the blacklist as compiled by the UNHRC and other BDS advocates also defines East Jerusalem and the Golan Heights as “settlements.” In other words, to satisfy the boycotters, Israeli companies wouldn’t merely have to stop providing essential services to hundreds of thousands of Israelis in the West Bank; they’d also have to stop providing services to hundreds of thousands of Israelis in Israel’s capital, not to mention the tens of thousands of non-Jewish, non-Israelis living in both eastern Jerusalem and the Golan. Complying with the boycott would, thus, cause a humanitarian crisis of major proportions –and, therefore, it isn’t going to happen.

Until now, because most boycott initiatives have been small-scale, it’s been possible for people who advocate “just boycotting the settlements” to ignore what that actually means. The irony is large-scale initiatives like the UNHRC blacklist, by publicly spelling out exactly what it entails, make it much harder for people to keep ignoring the truth: that “boycotting the settlements” actually means boycotting Israel.

Nevertheless, this realization isn’t going to sink in without a lot of work on the part of both the Israeli government and Jewish and pro-Israel activists worldwide. Indeed, that’s one of the main lessons of the victories to date.

When the BDS movement first emerged, many well-meaning people advocated ignoring it rather than fighting it on the grounds that fighting it would simply inflate the importance of an otherwise insignificant movement. But victories like those of the past few weeks show why that strategy was wrong. The growing understanding that BDS is anti-Semitic didn’t happen because Israel and overseas activists ignored the movement; it happened because both the Israeli government and overseas activists relentlessly explained the connection between boycotting Israel and anti-Semitism. And a similar effort will be needed to explain that “boycotting the settlements” is just a euphemism for boycotting Israel.

Even though large swaths of polite society are now perfectly comfortable with anti-Semitism as long as they can tell themselves it’s just “anti-Zionism” or “fighting the occupation,” open avowals of anti-Semitism are still taboo. Once stripped of the comforting pretense that it’s not anti-Semitic, BDS will be finished. And groups like the Austrian student union and the Bavarian Green Party are now tearing that pretense to shreds. 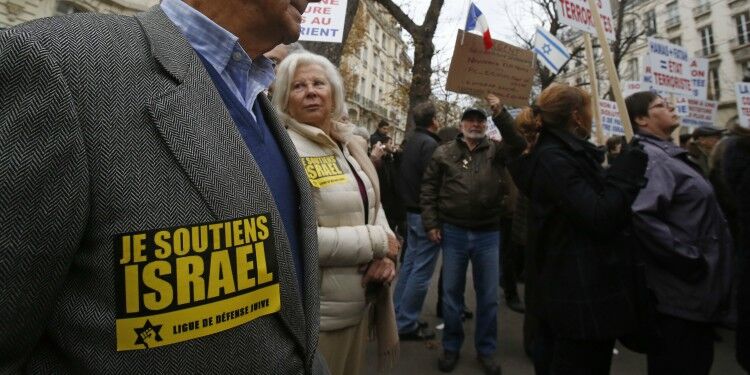