Whenever I express optimism about the incremental improvements in Israel’s relations with the Arab world, I always get the same question: How can I be optimistic about relations with countries whose populations overwhelmingly loathe Israel and are often anti-Semitic to boot; whose governments actively propagate such sentiments through school curricula and state-run media, while working against Israel in every possible international forum? My answer is that none of that is new. What’s new is the growing number of people in the Arab world willing to publicly challenge these attitudes. Indeed, in recent weeks, scarcely a day has passed without another example.

Perhaps the most remarkable was an offshoot of last weekend’s Egyptian-Saudi deal under which Egypt will transfer two Red Sea islands to Saudi Arabia. Those islands can effectively blockade access to Israel’s port of Eilat, and one such blockade was the proximate cause of the 1967 Six-Day War, during which Israel captured them. The 1979 Egyptian-Israeli peace treaty returned them to Egypt in exchange for a promise of Israeli freedom of navigation in the Red Sea – a promise threatened by the islands’ move to Saudi control, and consequently, a change in the peace treaty that required Israel’s consent.

Israel gave this consent because Riyadh provided a written pledge to honor the terms of the Israeli-Egyptian treaty. Moreover, Saudi Foreign Minister Adel al-Jubeir reiterated this pledge publicly in an interview with Arab media: “The commitments that Egypt approved [in the peace treaty] we are also committed to, including the stationing of an international force on the islands… We are committed to what Egypt committed to before the international community.”

That’s a stunning shift for a country once so opposed to the treaty that it severed relations with Egypt for daring to sign it, and which still has no diplomatic relations with Israel itself: Saudi Arabia just formally committed itself to a peace treaty with a state it officially doesn’t recognize.

A few days later, a former Iraqi diplomat arrived in Israel as an official and very public guest of Israel’s Foreign Ministry. Hamad al-Sharifi served in the Iraqi embassies in Kuwait and Jordan and as an advisor to Iraq’s Defense Ministry. Before coming, he declared, “I consider myself a friend of Israel. At this time, Arabs need to understand that there is no conflict between Israel and Arab states, rather there is an Israeli-Palestinian conflict.” And after arriving, he told Israeli officials they should stop permitting secret visits by Arab officials, because “In order for the barriers to be broken, the visits should be done in full public view.”

Then there’s last week’s report from a Lebanese daily about an unprecedented initiative by a group of Lebanese schoolteachers: They want the country’s school curriculum revised to drop “animosity toward the oppressing Zionist entity” from the list of goals. They “do not want to educate our children to hate,” they explained. And besides, it’s silly to focus solely on Israel when there are other pressing priorities, like “the struggle against the religious extremism that threatens Arab states.”

While Lebanon is just discussing changing its curriculum, another Arab country actually did so earlier this year: For the first time in the 37 years since the Israeli-Egyptian peace treaty was signed, Egyptian textbooks have started characterizing it as a positive development that offers Egypt numerous benefits, including “maintaining the Arab countries’ internal stability”; “advancing economic and social development and upgrading the state’s infrastructures”; “encouraging Arab and foreign capital investment in Egypt and in the other Arab states”; and increasing tourism. Also for the first time, the textbooks now note that the treaty called for establishing “friendly relations” with Israel rather than merely “normal relations.”

Further evidence of the thawing relationship came last month, when a major state-owned Egyptian bank for the first time published the official exchange rate between the Egyptian pound and the Israeli shekel.

Clearly, every such move toward normalization provokes a backlash, and it’s not surprising that the backlash sometimes works. Last month, for instance, a Dubai security chief made waves by launching a Twitter campaign for friendly relations with Israel, inter alia, calling for “a coalition with the Jews against the enemies of the Middle East” and urging his followers “not to treat Jews as enemies, rather as cousins with conflict over land inheritance.” But he soon reverted to the standard Arab diet of anti-Semitic and anti-Israel tweets.

The surprising part is how often proponents of change refuse to be intimidated. In February, for instance, I wrote about Tawfik Okasha, the Egyptian parliamentarian who publicly met with Israel’s ambassador and proposed that Israel be asked to mediate Egypt’s water dispute with Ethiopia. Soon afterward, his parliamentary colleagues overwhelmingly voted to expel him from the legislature for the crime of violating their anti-normalization policy. You’d think that would suffice to intimidate anyone sharing his views. But one month later, another Egyptian MP, Sayyid Faraj, announced that he wants to organize a parliamentary delegation to visit the Knesset so as to “learn from Israel’s economic development and in general learn from Israel’s experience.”

Obviously, all of the above are just the first baby steps on a very long road; it will take decades, if not generations, for these views to spread to the broader Arab public. But for most of the seven decades since Israel’s establishment, there has been no movement at all toward reshaping public attitudes; even major events like the peace treaties with Egypt and Jordan were strictly government-to-government, and entailed no effort to change popular perceptions of Israel as a loathed enemy. The Egyptian textbooks’ treatment of the treaty is a perfect example; so, too, is the fact that for decades after the treaty was signed, Egypt’s military continued to train primarily for war with Israel.

Thus the fact that these attitudes are finally being challenged by Arabs themselves is of real significance. It won’t lead to any practical change in Arab-Israeli relations for a long time to come. But it’s a necessary first step toward such a change, and as such, constitutes genuine grounds for optimism. 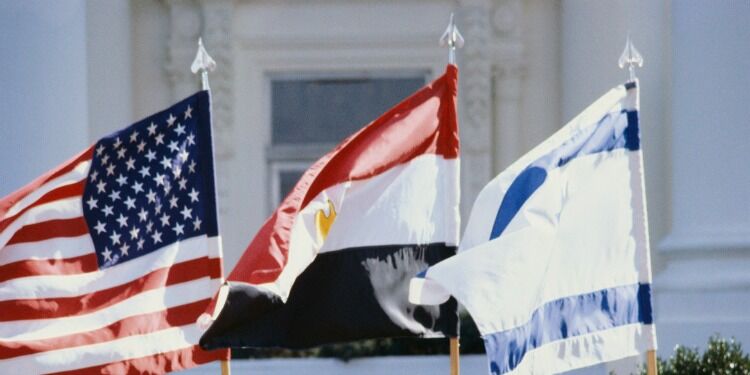