Hillary Clinton just gave the speech of her life in attacking Donald Trump on foreign policy. I’ve been watching and listening to her for 25 years and wrote an entire book in 2006 warning America about the dangers of a Clinton presidency (a book almost as unsuccessful as her 2008 presidential bid, now available for $.01 on Amazon, and I’m not kidding). Never before has she pulled off a coup like this one — an extremely well-crafted and well-delivered broadside against Trump’s willful ignorance and ill-considered policy prescriptions, as well as a coherent presentation of a liberal internationalist approach to foreign affairs. (It was likely written by Jake Sullivan, who would likely be her secretary of state or national security adviser should she win in November.)

Her campaign over the past year has been a series of missed opportunities when big moments were called for, and her inability to rise to these occasions was one of the reasons she inadvertently helped midwife the challenge against her from Bernie Sanders. She has now sent Trump an unambiguous message: game on.

Now, there will be untold thousands of words of analysis devoted to this address, and much of it will properly center on the areas in which she factitiously and falsely defended her and Barack Obama’s foreign-policy choices from the Russian reset in 2009 to Syria in 2012 and, most especially, the Iran deal. But in its immediate aftermath, what is most striking is how determinedly Clinton decided to move herself to the center, edging to the center-right, on foreign policy matters and most especially on the complex issue of American exceptionalism.

With a few deletions and emendations here and there, this could have been Marco Rubio’s stump speech. It was many clicks to the right of Barack Obama — a striking fact, considering that she is still facing the possibility of a Sanders humiliation or two on Tuesday (including a loss in California) even as she will certainly clinch the nomination that evening. Her general approach has been to allow Sanders to pull her further to the left than she surely has wanted to go. She chose to risk the wrath of the Sanders leftists in order to speak more directly to the 15 percent of voters who don’t seem to know whom to vote for yet.

Indeed, in its most stunning moment, she went after Trump for attacking Ronald Reagan in 1987 in terms similar to those in which he talks about America’s standing in the world now.

Read the speech, if you didn’t watch it. It will surprise you. 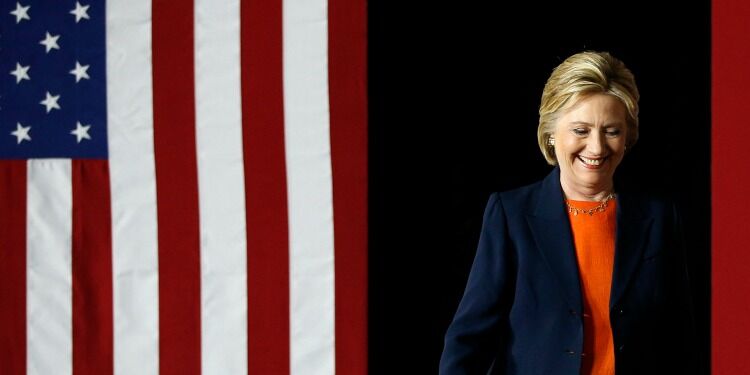