Noah noted yesterday that all the candidates for the Democratic nomination for president have endorsed the idea of making the District of Columbia a state. They prattle on that it is unfair—and it is—that the citizens of D.C. don’t have any representation in Congress other than a non-voting delegate to the House.

But everyone knows that the real reason they want to make D.C. a state is to add two permanently Democratic seats to the Senate. After all, in 1984, when Ronald Reagan won 49 states (and came within 3,761 votes in Mondale’s home state of Minnesota) he lost the District of Columbia by 72 percentage points, 13.73 percent to 85.38 percent.

The District of Columbia, of course, bears not the slightest resemblance to a state. It is a city. Tiny Rhode Island is nearly 20 times as large. And every state has a multiplicity of interests that must be balanced: agricultural, mining, fishing, banking, insurance, etc. But the District of Columbia has only one interest: the care and feeding of the federal government. It is the ultimate company town.

And while the candidates want Washington to have its own senators, Nashville, Tennessee, which has population is about the same as Washington’s, has to share its senators with Tennessee’s other 94 counties. That’s not fair either.

Also, making the District of Columbia a state would violate the Constitution. Article I, Section 8 gives Congress the power, “To exercise exclusive Legislation in all Cases whatsoever, over such District (not exceeding ten Miles square) as may, by Cession of particular States, and the Acceptance of Congress, become the Seat of the Government of the United States . . .” Congress has delegated that power to a city council but could take it back or overrule it (and it has before) at any time. Make D.C. a state and that power is gone forever. And while constitutional powers can, in some cases, be delegated, they cannot be alienated. So, a constitutional amendment would be required and everyone knows that is impossible.

When a heavily Democratic Congress passed the proposed 28th Amendment in 1978, which gave the District the powers of a state for purposes of federal elections and for approving constitutional amendments, only 16 states ratified it–22 short of the 38 needed–before the amendment expired seven years after its passage by Congress.

If the Democratic candidates cared tuppence for fairness instead of what they really care about, political power, there is a simple solution to the problem of having the people of the District of Columbia properly represented in Congress. It, too, would require a constitutional amendment, but one that would probably pass as it is actually fair:

“Section 2. The twenty-third article of amendment to the Constitution of the United States is hereby repealed.”

The District would have its own voting member of the House, although it might have to share him or her with a few close-in Maryland suburbs, and would be represented by the senators of the state of Maryland. D.C. would also vote to award the electoral votes of Maryland, which would increase by at least one.

As an additional bonus, repealing the 23rd Amendment would reduce the number of electoral votes to 538 from 535. So there could be no tie votes that would send the election to the House, although a strong third-party candidate could still do that.

An earlier version asserted that the last time a third-party presidential candidate won a state was in 1948. In 1968 George Wallace carried five southern states. 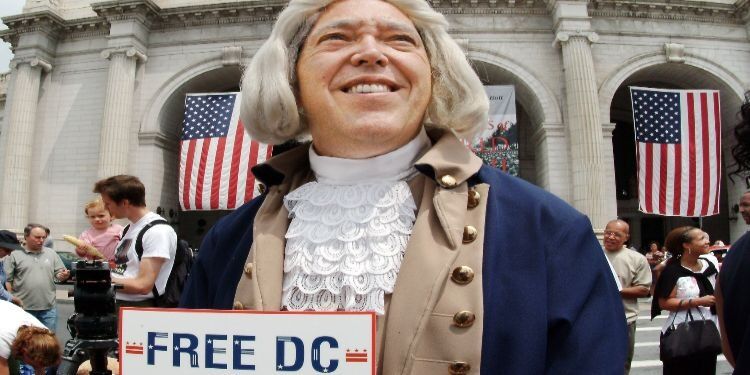