Sir Arthur C. Clarke, the great science and science-fiction writer, famously formulated three laws of forecasting. Among them, “When a distinguished but elderly scientist states that something is possible, he is almost certainly right. When he states that something is impossible, he is very probably wrong.” Fifty years ago this Saturday, Clarke’s law was proven in spades.

“The whole procedure [of shooting rockets into space] . . . presents difficulties of so fundamental a nature, that we are forced to dismiss the notion as essentially impracticable,” Sir Richard Wooley, British Astronomer Royal from 1956 to 1973, wrote in 1936. As recently as 1956, he had told TIME that “all this talk about space travel is utter bilge.” To be fair, he wasn’t dismissing the technological possibility, but rather the financial one. “It would cost as much as a major war just to put a man on the moon” he noted.

But just thirteen years later, Neil Armstrong climbed down a gangway and stepped on the moon.

Wooley had been right that it cost a bundle–$24 billion, about $200 billion in today’s money. Why did we undertake such an expensive program that yielded very modest scientific results (moon rocks, a seismometer to measure moonquakes, a mirror that allowed us to measure the distance to the moon with a laser to the millimeter, etc.)? The answer, of course, was war; a cold one, fortunately, but no less a geopolitical struggle.

The United States had been embarrassed when the Soviet Union launched Sputnik in 1957, beating us into space. To be sure, Sputnik was only a proof of concept. It didn’t actually do anything other than circle the globe. The beep-beep-beep it emitted was just that, beeps carrying no information. But though it was of no scientific consequence, it was also, perhaps, the greatest propaganda coup of all time.

The Soviet Union continued to beat us, putting the first man into sub-orbit and then into orbit and back. The Kennedy administration decided to win the propaganda war by going to the moon, confident that we could beat the Russians because we could afford it and they couldn’t. Cicero’s observation about hot wars applies equally to cold ones: “The sinews of war are infinite money.”

And so, on July 20th, 1969, the world watched Neil Armstrong put his foot on the surface of the moon and say, “That’s one small step for a man, one giant leap for mankind.”

I watched the lunar lander come to rest on the moon at about three o’clock in the afternoon of July 20th with my grandfather, who was then 87 years old. (Armstrong would not leave the capsule until about 11:00 PM, EDT.) Ever the historian, I couldn’t help but reflect that my grandfather had been born into a world of gaslight and horses. No man had ever traveled more than about 100 miles per hour in the 1880s. He had been 22-years-old when the Orville Wright first flew (at about six miles an hour, into a stiff headwind), although he wouldn’t have known it, as the flight was not reported in the papers. And here he was at the dawn of the space age, watching a capsule that had reached 25,000 miles per hour on its way to the moon touch down on its surface.

The essentially propagandistic nature of the Apollo program is shown by the fact that no one has set foot on the moon since 1972. NASA’s budget has been much more productively employed using unmanned space probes to reach even beyond the heliopause, where the solar wind dissipates and true outer space begins, and to visit every planet and many other objects in the solar system. Our knowledge of the solar system today is several orders of magnitude greater than it was in 1969.

Still, consider this: For a million years, humans have looked at the moon and wondered what the other side looked like. Only in my generation did we find out, thanks to the Apollo program. 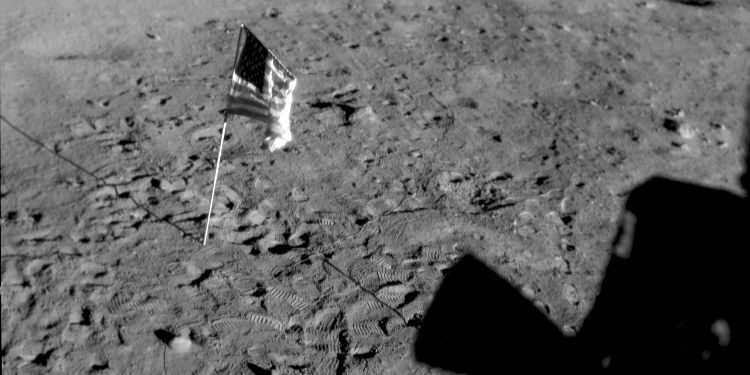