This week after yet another brutal attack on a French Jew, one of the community’s leaders drew an ominous yet rather obvious conclusion. Reacting to the vicious assault on a Jewish man on his way to morning prayers by a Turkish-born radical Muslim who said his crime was committed “in the name of Allah,” the head of Marseille’s communal Jewish organization advised fellow Jews to stop advertising their identity. To be more specific, Zvi Ammar said Jewish men should cease wearing kippahs in the street “until better days.”

Ammar has been sternly criticized by other Jewish leaders, including those from the CRIF — the umbrella group of national Jewish organizations in France — who say his comments are akin to surrender to anti-Semites and terrorists. They’re right to point out that anti-Semites won’t be satisfied by driving Jews into hiding. Moreover, to abandon the streets to Islamist thugs is tantamount to saying that Jews can’t live openly as Jews in France. If European Jewry is to have any future in an era when anti-Semitism is on the rise, it can only be by standing up for who they are and what they believe in, including support for Israel, rather than cowering in fear.

But as wrongheaded as his Ammar’s advice might be, it must also be conceded that his approach might be rooted more firmly in reality than the brave talk coming from other Jewish leaders or the inspiring rhetoric we’ve heard in recent months from French political leaders about defending the rights of their Jewish citizens. It may well be as French Prime Minister Manuel Valls said last week while commemorating the anniversary of the terror attack on the Hyper Cacher market in which four Jews were slaughtered by the same Islamist cell that committed the Charlie Hebdo massacre, that the thought of Jews leaving the country because they were no longer safe was, “an unbearable idea.” In his view, “France without Jews is not France.”

Maybe so. But the reality of France — as well as much of Europe — in 2016 is that Ammar is right in assessing the danger to the Jews of Marseilles. Anyone who walks around in parts of the city overtly proclaiming their Jewish identity is taking their lives into their hands. That’s why immigration to Israel — a place where Jews can and do defend themselves against Jew-haters and where the expression of Jewish identity is guaranteed — is rising from France as well as the rest of supposedly enlightened Western Europe.

The France that Valls wants to believe in may be a secular republic where equal rights for Jews, Muslims and all religious and ethnic minorities are not called into question. But the Jews of Marseilles and Paris don’t live in such a place anymore. They understand that although the ringing speeches about fighting anti-Semitism we hear after every attack on Jews is comforting, neither those words nor other gestures of solidarity are going to protect Jews that are singled out for brutality by Islamist thugs.

While one should be careful not to exaggerate the danger, the frequency of attacks on Jews is discouraging and enough to impact the mentality of a community that understands that Europe is changing.

Part of this stems from the incitement against Israel that has become a staple of European political culture. An unholy alliance of academic and artistic elites with Muslim immigrants in a coalition that seeks to isolate supporters of Israel is disturbing in and of itself. But these groups no longer even bother to hide the connection between anti-Zionism and anti-Semitism. The growing hatred for the Jewish state is inseparable from the rising tide of anti-Semitism that is sweeping through Europe.

Nor can it be entirely separated from the violence against women on the part of a segment of the immigrant Muslim community that was brought to attention by the coordinated mass assaults that took place in Cologne and other German cities on New Year’s Day. The point is, as large unassimilated immigrant populations become part of Western Europe creating “no-go zones” and making public areas unsafe for outsiders, an already embattled Jewish minority will be even more at risk. Under such circumstances the liberal values of Western Europe aren’t merely being undermined, they are being replaced by something very dangerous.

In September, I wrote about the bad advice French Jewry got from American pollster Stanley Greenberg, who told them they should stop mentioning their support for Zionism and brand themselves as “French citizens” rather than “French Jews.” I believe such a strategy is tantamount to surrendering to the forces of anti-Semitism. Yet when faced with the question of whether members of his community should bravely assert their Judaism even if means risking injury or death, can we really blame those who decide to swap their kippahs for a more anonymous baseball cap?

Expressions of solidarity with Jews are certainly to be welcomed. Thus, the call for those attending a match of the Marseilles soccer team this weekend to wear a kipah, whether or not they are Jewish is encouraging. But a community that must depend on such extravagant gestures cannot be said to be secure.

Jews should have the right to walk proudly down any street in France or any other country in the world. And it is the responsibility of French leaders to ensure that they can do so in safety. But Prime Minister Valls can no more promise that a Jew in a kippah won’t be attacked with a machete any more than Chancellor Angela Merkel can tell German women that they need not fear being assaulted if they stand in public spaces with large numbers of young male immigrants.

European Jews are entitled to hope that the situation will change, but no rational analysis of the situation lends any credence to such wishes. That’s why more French and European Jews are leaving for relative safety in Israel. Though life there is not without strife or peril, at least there Jews need not be dependent on the mercy of non-Jewish authorities that are essentially powerless to alter the shift in the culture of their countries.

In that sense, French Jews are again the proverbial canaries in the coalmine indicating the peril of anti-Semitism. Their kippahs are an indication that European civilization as we knew it is once again in peril. While there are clear differences between what is happening now and what happened in the 1930s, the best advice for those Jewish communities may not be dissimilar. They can stay and bravely hope for the best. Or they leave and live fully Jewish lives elsewhere, particularly in Israel. Choosing the latter may not only be safer but the better part of valor. 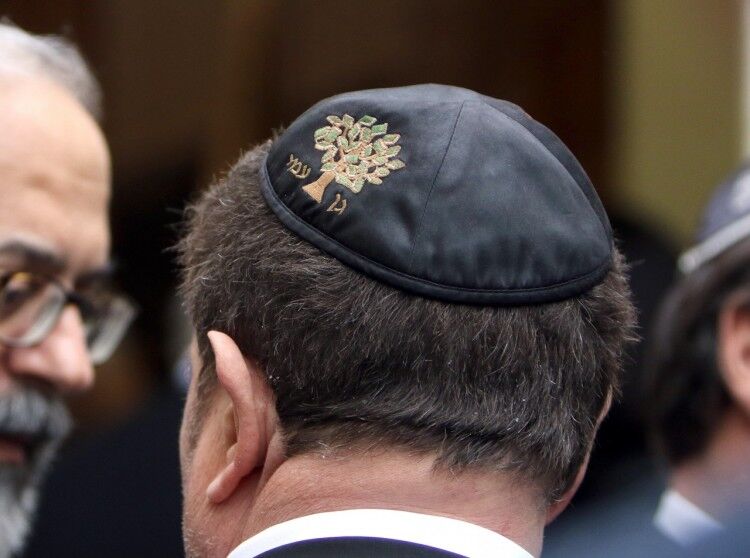