One of the enduring narratives of the 2012 election for some on the right is the belief that millions of conservatives stayed home that year rather than vote for an insufficiently conservative Mitt Romney. This year, the missing millions was a standard talking point for Ted Cruz and some other conservatives who believed it was imperative that the Republicans not choose a moderate that couldn’t galvanize the party base. Most credible sources considered this theory bunk because the data showed that the percentage of conservatives voting had not declined. But now a serious political analyst has now looked at this question again and discovered that Cruz and other conservatives were at least partially right. In the New York Times’ Upshot section, Nate Cohn writes that a new study asserts that there were millions more white voters in 2012 than the exit polls showed.

In theory, this is, as Cohn notes, very good news for Donald Trump. His only path to the presidency is by amassing an overwhelming majority among white males who will counter-balance the certainty that women, young people and, most crucially, minority voters are going to reject him by historic margins. If there are a lot more of them than anything of on the left or the right, though, that gives him at least a theoretical chance to win the presidency. But along with that piece of good news, there is also bad news. According to the study, a lot of heretofore unaccounted for whites seem to have voted to re-elect Barack Obama.

That means that, contrary to the conclusions drawn by everyone from the 2012 data, that the electorate is actually older, less educated, and whiter than we thought. That’s exactly what Trump wants to hear since his message is primarily aimed at such voters. But if Trump does mobilize an avalanche of discontented white voters to turn out in November, there is another piece of bad news awaiting him in this analysis. If Trump’s racist talk, anti-immigrant policies, and misogyny alienate a lot of the better-educated whites that either backed Romney or chose Obama in 2012, his path to the White House via domination of the white vote goes from being extremely narrow to nonexistent.

The Republicans were faced with a serious demographic problem in 2016 no matter who it was that won their presidential nomination. The 2012 exit polls showed that Romney won the white vote by a decisive 59 to 39 percent margin. In 2004, the last time the GOP won a presidential election, George W. Bush got 58 percent of the white vote and the same percentage of white males (62 percent). The number of white voters had declined in that eight-year period from 77 to 72 percent of the electorate. Meanwhile, the Republican share of the Hispanic vote collapsed from 44 percent to 27 percent. Romney also did badly among women, getting 44 percent, 4 points down from the 48 percent of women who chose Bush.

With the Hispanic vote expected to increase this year and with the white share of the vote declining every four years for the last few decades, it was always going to be an uphill climb for any Republican, even if they had crossover appeal. But by nominating a candidate that was likely to get much lower percentages of women and Hispanics, the math just doesn’t add up in a way that would give Trump a path to the presidency.

But voter trends are always subject to the differing circumstances and choices that arise in each election. And political science isn’t really science. As our John Podhoretz wrote in the New York Post, Hillary Clinton has more paths to victory than Trump because of the built-in advantage the Democrats have in the Electoral College because they start out with far more votes in their column. Any Republican would have to win almost all the swing states or somehow be able to generate a landslide in which the Democrats will collapse. There doesn’t seem to be any evidence that the latter scenario is realistic, but if Trump were to get even more white votes than Romney and Bush, he could win even if he lost the minority vote as we anticipate will happen.

That’s the window Cohn seems to be pointing in focusing on a study that miraculously discovers more white voters than thought existed. The University of Florida researcher he cites says exit polls have a bias toward younger, better-educated, and diverse voters. That means that, in 2012, there were actually more white voters casting ballots than we thought. Since Romney won the white vote so handily, that ought to have produced a closer election. But if these white voters did exist, clearly a lot more of them chose Obama than the exit polls reflected.

Can that be right? Maybe. I think most serious observers always understood that exit polls are not as accurate as other survey data, but I don’t think many of us thought they were getting the racial composition of the electorate wrong. But if it is a correct analysis of the 2012 electorate, I don’t see how that helps Trump all that much.

If there were millions more white voters than we thought than that means Romney didn’t do as well in that category as we assumed. If they do exist, the challenge is how does Trump get more of them? It’s one thing to assert that the missing millions were basically Reagan Democrats that stayed home because they weren’t offered a true conservative option and that they will vote for Trump in huge numbers because he is so different (though clearly not a conservative). But it’s quite another to assert that people who did show up and voted for Obama are going to choose Trump this time. Indeed, there is good reason to believe that Trump will lose some of the better-educated and female Republican voters who could bring themselves to vote for an upstanding if dull candidate like Romney but want no part of someone like Trump, who has trumpeted statements that even the leaders of his party correctly termed racist.

But no matter how you slice up these demographics, I still find it hard to believe that in an increasingly diverse America, the percentage of white voters won’t continue to decline and that the fast-growing Hispanic community won’t be larger in 2016 than it was four years ago. Since the swing states won by Obama in 2012 that Trump will have to flip in the North have become more ethnically diverse and more liberal in recent years, it’s hard to see how he does this even if millions of missing voters turn up since a lot of them are going to vote for Hillary Clinton. Trump also appears to be losing more educated Romney voters than he is gaining in terms of missing conservatives who will turn out this year.

Cohn’s conclusions turn on their head a lot of the calculations that have driven both Democratic and Republican strategy since 2012, and they render analyses that say demographic dooms Trump obsolete. Trump can prevail if he wins both upscale and downscale white males by greater percentages than any Republican has done before. But what are the odds of that happening?

In 2012, a lot of Republicans were so convinced that Obama couldn’t win that they spent months discounting national polls that showed just the opposite. They couldn’t believe he could possibly get the same or greater percentage of voters as he did in 2008. But the electorate turned out to be more Democratic than they thought. Trump loyalists that count on the surveys underestimating the number of white voters and then assume that Trump will sweep to victory will be making the same mistake. Hillary Clinton is no Obama, but Trump is also even more of a turnoff for many voters than Romney turned out to be. In order to win a lot of things will have to go right for him that don’t seem terribly likely. It’s still more likely than not that a lot of those extra white voters he’s counting on are never going to vote for Trump. 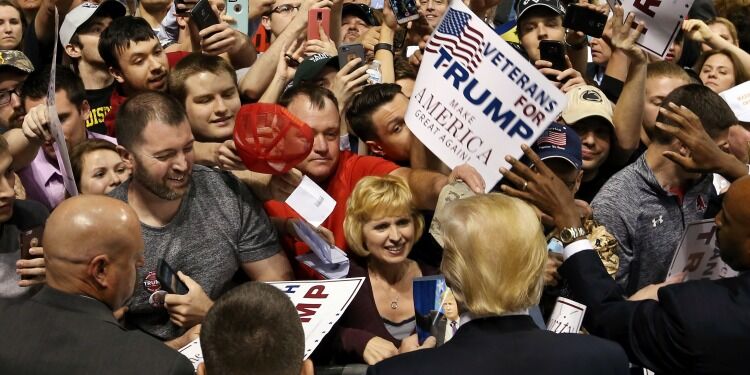