From the start, the Donald Trump campaign has been something of a one-man band. But in the last few days, we’ve seen just how much a lone wolf Trump has become. While it was not surprising that some of the mainstream Republicans that had been reluctantly dragged into supporting the presumptive GOP nominee would seek to distance themselves from his racist attacks on Judge Alonzo Curiel, one of his most faithful supporters in recent months has now also condemned his comments.

Trump’s repeated charge that the judge presiding over the Trump University fraud case couldn’t be fair because he was a “Mexican” led former House Speaker Newt Gingrich to declare this to be not only a “mistake” but “inexcusable.” Gingrich is, of course, right, and he deserves some credit for saying so after several weeks of dedicated shilling for Trump. But his apostasy, which earned him a quick and severe reproach from the Republican standard-bearer, raises some interesting questions not only about life in Trump World but how Trump’s increasing isolation will affect his decisions as a candidate and as president should he be elected.

In taking Trump to task for his obsessive smears of Judge Curiel, Gingrich was careful not to leave the impression that he had abandoned his candidate. He did not call Trump’s statements as racist and praised him as a “remarkable leader” who is a “fast learner” and spoke of their “good relationship.” He also insisted that he would back him against the “much more flawed” Hillary Clinton “all year.”

But that wasn’t enough to spare him from a rebuke from the GOP’s new Dear Leader. Trump’s reaction betrayed not only his legendary thin skin but also a well-known rule about entry into his inner circle: Trump must always be supported and praised. That’s why he didn’t merely disagree with Gingrich but stated that his comments were “inappropriate.” Of course, it’s somewhat humorous for a man for whom propriety is a dirty word to criticize someone with that term, but, in Trump World, there is only one code by which one must abide: loyalty to the Donald, first, last, always.

To be fair, Trump isn’t the only leader to have such a rule. Though the man he is seeking to replace in the White House can act publicly with far more grace than Trump, his is an administration where entry in the inner circle requires not merely loyalty but a determination never to disagree with Obama. His has been a top-down administration in every way and anyone who dissents from his rulings must either pipe down and be a cipher (which is the best way to characterize Hillary Clinton’s four years as secretary of state) or resign.

The analogy to the president’s management style is no compliment to Trump. But the difference is that Obama had, from the beginnings of his candidacy in 2007, assembled a large, loyal, and devastatingly efficient team to serve him and was able to stay on message throughout both of his campaigns for the presidency. By contrast, the disorganization in Team Trump is no secret. Nor is the fact that more than a month after he clinched the Republican nomination, it is still woefully understaffed and unprepared to deal with crises or opportunities. But that is to be expected. Obama ruled over a campaign machine with a heavy hand, but he never put his people to the test the way Trump has, given his impulse to constantly go off message and to indulge his worst instincts as he vents anger and frustration at all who will not bow to his will.

Gingrich says this is a “turning point,” which should teach Trump to start listening to advice from cooler, wiser heads and to stop going off message. But as Trump has shown us again and again, even if he thought such a switch would be wise, which he doesn’t, he just doesn’t want to change. The fact that he dug himself deeper into this controversy by claiming a Muslim judge would be equally unfair made it obvious that the candidate isn’t listening to such advice.

As such, this will probably mean that Gingrich is crossed off his short list for the ice presidential nomination and could now be frozen out of Trump’s inner circle. Senator Bob Corker, who has also been sucking up to Trump relentlessly in recent weeks didn’t go as far as Gingrich but still spoke yesterday about him having to change and not being willing to “condone” the comments about the judge. Will he too be voted off of Trump Island for criticizing its king? It’s hard to say, but if Trump is going to limit his choice to those who have not spoken out against his racist rants, it will narrow down the options considerably.

Trump’s refusal to stop abusing the judge on racial/ethnic grounds for refusing to dismiss the fraud case against him has given us a window into his character. As we should have already learned, there are no limits to what Trump will say to besmirch the character or the conduct of anyone who criticizes or thwarts him in any way. If it means outright lying or disingenuously circulating false stories or playing the race card, he will do it and think himself justified because anyone who is not with Trump is deserving of being slandered and/or crushed.

This also tells us a lot about how a President Trump will govern.

We’ve seen under Obama how a White House whose animating principle is the glorification of one man and his ideas operates. Obama has given us a good, long look at how little the rule of law can mean to a president who thinks himself the sole judge of what is right and justified in making end runs around Congress and the Constitution when he is thwarted. With Trump, we would likely get more of the same with the sole difference that personal vendettas may become the primary focus of an imperial presidency rather than just a sidebar to the demands of a left-wing ideologue in the manner of Obama.

The Obama White House has operated much like his presidential campaigns with ruthless efficiency and message control creating echo chambers with an acquiescent press corps in order to push through unpopular and dangerous ideas like ObamaCare and the Iran nuclear deal. But with Trump, we’d get the same president worship without the discipline and control. His administration would also center on the whims of one man but have an added layer of palace intrigue and viciousness, as his mercurial personality would make the presidency hostage to his moods, whims, and an ever-expanding personal enemies list. Imagine the paranoia and rage of Richard Nixon mixed with the hubris of Obama and that might be what awaits us unless Trump does undergo a magical transformation in the next few months.

Republicans do well to point to the dismal prospect of another Clinton presidency, in which an integrity and truth-challenged leader also operated in a different kind of echo chamber where she, too, rages against enemies that she always imagines are conspiring against her. Yet as long as Donald Trump continues to go off message and to make his own character and troubling attitudes toward race and religion become the story of the day, Hillary Clinton’s shortcomings will not loom quite as large in the public imagination, as perhaps they should. The Sunday talk shows might have centered on Clinton’s woes but, instead, those stories were drowned out by Trump’s rants. But by speaking out now, Gingrich’s heresy may provide us with an interesting test case about Trump as well as one that will give us a clue about his chances of adapting to the needs of the general election. Unless Trump World becomes a more conventional campaign with a candidate who can learn to keep his mouth shut when he feels the impulse to make racial comments and is ready to listen to loyalists like Gingrich rather than to freeze them out, we may never get to see if the fears of both Democrats and Republicans about the nature of a Trump presidency will be realized. 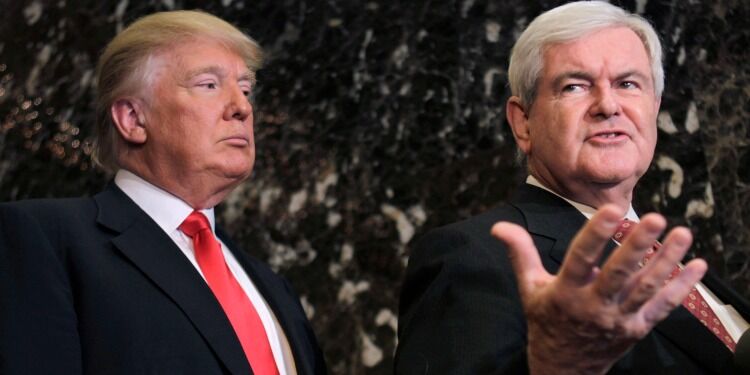