There were moments in Tuesday night’s Republican presidential debate when Ted Cruz and Marco Rubio engaged in a spirited and tough exchange about substantial issues. On topics such as how best to fight ISIS, defense spending, the merits of toppling dictators and what to do about illegal immigration, the two illustrated that even in a format that has too many candidates and too much shouting and personal attacks, it’s possible to have a genuine debate that sheds light on the issues. If the course of the race were going to be determined by such exchanges, these two would be the frontrunners and Rubio might be edging ahead since Cruz’s positions don’t stand up to scrutiny. The point is that their tussle isn’t just a personal fight between two ambitious young men but one over the future direction of the Republican Party.

But it isn’t clear that’s where the 2016 Republican presidential race is heading.

That’s because we already know that the talks from pundits about winners and losers in the debate isn’t likely to influence opinion polls of GOP voters that will follow in the coming days. In a political environment in which Donald Trump could already hold leads of up to 23 and 27 points over his nearest competitors in the most recent national polls, it isn’t likely that an objective analysis of his positions on war and peace issues actually matters.

Let’s be clear about this. When Trump spoke of shutting down “areas” of the Internet in order to hamper ISIS, threatening noncombatants and demonstrated that he had no idea what the nuclear triad was (a concept that Marco Rubio helpfully explained to both Trump and the viewers at home), his unsuitability for the post of commander-in-chief, not to mention his ignorance of the issues, was evident.

But anyone who thinks the 27 to 41 percent of Republicans who tell pollsters they prefer Trump will regard these awful mistakes as disqualifying hasn’t been paying attention to the race.

Trump’s boorish disregard of the issues clearly annoyed Jeb Bush and Rand Paul, both of whom pointed out the disconnect between Trump’s positions and reality. But Trump’s recent rise in the polls from an already strong position isn’t a function of his command of the issues. It has been apparent for months that Trump’s support is rooted in cynical distrust of the political establishment and anger at the government’s failures. And the worse things get — and things have gotten a lot worse in the aftermath of the Paris and San Bernardino terror attacks — the more a critical mass of voters seems prepared to turn to the angriest, least rational person in the race. Indeed, it appears that Trump’s arrogant dismissal of the facts, like his willingness to say outrageous things, is exactly what appeals to voters that are fed up with politics as usual.

Thus, to speak of conventional winners and losers in a debate where no one was able to take down Trump in a manner that might make a difference to his supporters is to misunderstand how this race is being fought.

In the real world where facts do matter, we might consider Rubio to have been the winner of the debate. He did better than anyone else when it came to explaining where America stood in the war against ISIS and why a reflexive avoidance of nation-building or an aversion to toppling dictators doesn’t amount to a coherent position safeguarding American security. He also bested both Cruz and Rand Paul in the exchanges on the metadata collection that they helped kill which removed a valuable tool from the arsenal of U.S. intelligence. He also more than held his own on the one topic where he is weakest: immigration. Rubio explained the evolution of his position to the point where he said any path to citizenship must be put on hold until the government can demonstrate it could be trusted to enforce the law and defend the border. He also countered Cruz’s attempt to nail him as an advocate for amnesty by pointing out that the Texas senator’s positions were little different from his in 2013, catching him in an outright fib when he denied this was so.

But it’s not clear whether enough Republicans live in that fact-driven world.

Cruz is clearly competing for Trump’s voters when he speaks of carpet-bombing ISIS to demonstrate his ruthlessness. But his belief that Bashar Assad should be left in place and his refusal to contemplate the use of American forces to defeat the terrorists on the ground shows how contradictory his position turns out to be. Indeed, like Trump, for all his belligerent talk, Cruz’s stand is much closer to that of President Obama than it is of most other Republicans.

But like Trump, Cruz was undaunted and probably held his own as the leading challenger to Trump. Though some of his backers may have cringed when he demonstrated his unwillingness to stand up to the real estate mogul, it is consistent with his calculation that hugging Trump is the best to win over his backers should the reality star fade.

Seen in that light, the stronger showing by Jeb Bush is meaningless. Bush may have sounded tougher and made plenty of sense in his attacks on Trump but he really never laid a glove on the frontrunner. If he weren’t awash in SuperPAC money, he’d be pulling out of the race before the New Year.

One possible winner is Chris Christie, who also had another strong debate enunciating tough but rational positions on national security. Christie is positioning himself for a strong showing in New Hampshire, and he may have enhanced his chances there with his performance. But that’s something that both Trump and Cruz should welcome because a Christie moral victory or outright win in New Hampshire will keep the field of relative moderates crowded and make it even harder for Rubio to compete with the frontrunners.

As for the rest of the field, it’s fair to say that both Carly Fiorina and John Kasich did well. But they also have little chance of gaining ground on the leading contenders. Ben Carson faded even further into the background, though, except for a comical mispronunciation of the name of the head of the Republican National Committee, he sounded less at sea on foreign policy than he had been previously. As for Rand Paul, he may have scored some points with his libertarian base as he tried in vain to hammer Trump. But Cruz has stolen those votes likely leaving him stuck in the low single digits with no path to contention.

The problem for Republicans isn’t that they have no strong candidates. The field remains filled with a diverse selection of credible alternatives. It’s that the one that is the best debater and the best grasp of the issues may be out of step with an electorate that is so angry and turned off that it isn’t particularly interested in a debate about coherent policies. That may change once the voting starts and the field winnows down to only those who have a shot at the nomination, a group that may be limited to Trump, Cruz, and Rubio. But for the moment, the question the GOP faithful must be asking itself is whether a party that can embrace Trump is one that has a chance of winning the general election or providing a rational alternative to Hillary Clinton next November. 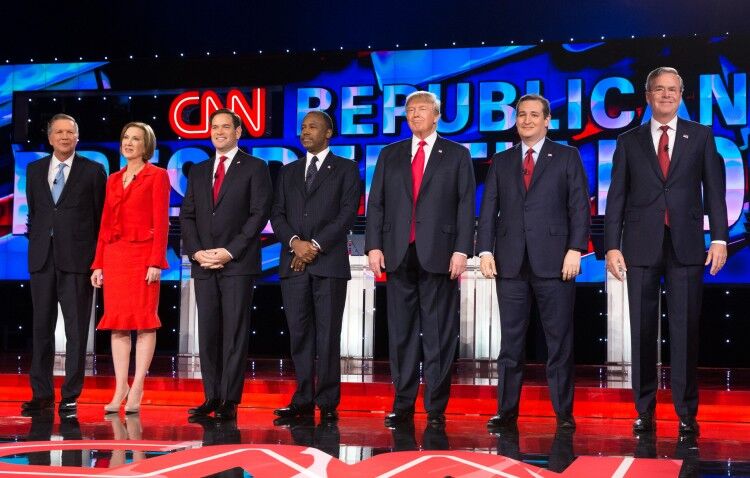