With his attacks on Judge Gonzalo Curiel, Donald Trump allowed Democrats to treat the 2016 election as a referendum on racism, as well as the other various disqualifying statements made by the presumptive Republican nominee. But just as his rhetoric about illegal immigration and building a wall that Mexico would pay for is likely to mobilize liberals and Hispanics to turn out to vote against him, one of the curious elements of this campaign is the way some of the anti-Trump forces are not only helping to solidify support for him but also making the case for his stand on illegal immigration.

The most visible elements of this trend have come in the form of the protests that occurred at Trump rallies in recent months. By that, I don’t refer only to the shocking violence that has occurred in which Trump supporters have been targeted by his opponents. It’s true the pattern for such violence was set by attacks on Trump critics that were disgracefully encouraged by the candidate. But perhaps the most telling moments may have been the pictures of anti-Trump demonstrators burning the American flag as well as waving the Mexican flag, actions that seem designed to inflame the passions of those that believe illegal immigration and border security are important issues.

But even when critics of Trump’s stands are eschewing such behavior and instead try to make a point about illegals being individuals rather than statistics, they may be aiding Trump or at least reminding Americans that, if stripped of his insults and demagoguery, he has something of a point on the issue.

By that, I refer to the instances in which undocumented—the left’s preferred euphemism for those who entered the country illegally—individuals out themselves in public. The consequences of such actions are sometimes unfortunate but also demonstrate that the divide on the issue isn’t necessarily about racism but the rule of law.

As the New York Times reported, recently two Texas high school valedictorians revealed that they are illegals. The two young women are clearly admirable in terms of both their grades and conduct (one is headed to the University of Texas and the other to Yale) and outstanding examples of the fact that most of those who are here without permission had a good reason for coming (one of them came here as a child with her mother while allegedly fleeing an alcoholic father) and that the country has or will benefit from their presence. The reactions to these stories also make illegals appear more sympathetic. One of the two announced her status on Twitter and the predictable abuse that rained down on her after that caused her to delete her account.

But what those who laud these young women in an attempt to shame those who oppose amnesty or a path to citizenship forget is that when people who break the law subsequently boast of it and demand acquiescence if not applause, the result isn’t just sympathy for their plight. It also generates resentment from the considerable proportion of the public that thinks failing to obey the laws of the land is not a minor affair.

It is one thing to oppose those who demonize illegal immigrants as well as those who, like a certain presidential candidate, are prepared to treat even American citizens with disdain because of their ethnic background and/or race. It is quite another to tell us that the laws of the land should be treated as meaningless. And that is exactly what these two young women and more prominent examples, such as journalist Jose Antonio Vargas, who became famous by announcing that he was here illegally in the New York Times Magazine in 2011, are doing when they dare the government to enforce the law in this manner.

It is possible to believe that reform of a broken immigration system is imperative and that a solution other than mass deportation is required for dealing with the current total of 11 million illegals while also upholding the principle that the law should be respected. All nations have borders and are entitled to say who may enter. That is as true for the United States as any other country in the world. But by flaunting their status in this way, these illegal celebrities and their supporters seem to be telling us that the border should be ignored along with the law. They are not pleading for a special dispensation or forgiveness for breaking the rules; they are demanding acceptance and even praise. Their conduct calls into question whether the rule of law exists in this country anymore.

And, in case liberals in the media and elsewhere didn’t understand it that is exactly why Trump’s stand on immigration and a wall resonates with so many people. Rather than showing why Trump is wrong, these announcements only augment his support as even the Times article on the two students noted. Like the violence and the burning of the U.S. flag, these efforts do what ought to be impossible: they seem to prove Trump right. If immigration reform advocates really want to build support for a rational solution to this problem this not the way to do it. To the contrary, the more illegals give the public the impression that the border is a mere technicality to be ignored, the more Americans are going to be inclined to think a man who wants to build a wall isn’t as crazy as he seems to be. 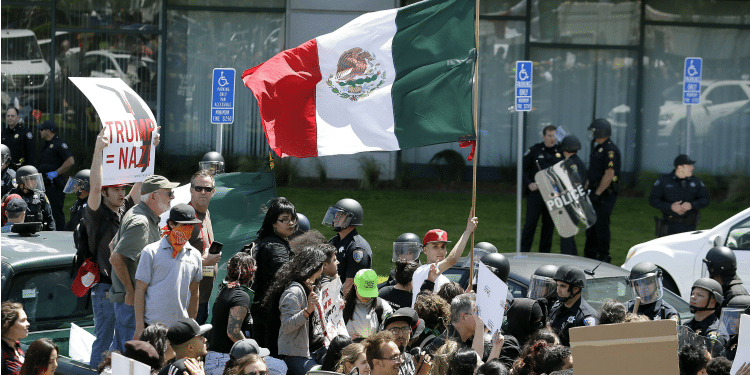