The last two times President Obama publicly addressed concerns about the administration’s faltering efforts against ISIS, he seemed more interested in demonstrating that he couldn’t be pressured by public opinion to take a more aggressive stance. But today the president finally seemed prepared to strike a slightly different tone. Appearing at the Pentagon after a meeting with top military leaders, the president had nothing new to offer in terms of strategy, but he was more truculent in his attitude about a war that isn’t going well by any objective standard. But while his more warlike mode of expression is, as a general rule, a better idea than lectures about why Americans shouldn’t panic or to stop thinking mean thoughts about Islam, the content of the president’s remarks still fell short of anything that demonstrates that he understands things aren’t going well. To the contrary, merely repeating that the U.S. has the right strategy doesn’t make it so. Even more disturbing is the notion that this president has bought into the sort of statistical metrics of war that are divorced from the reality of how conflicts are won or lost.

In his press conference in Turkey after the Paris attacks, the president wasn’t shy about showing that being forced to answer questions about his administration’s approach to terror made him very angry. That ISIS still held the territory it occupied since he first said in 2014 that he would “degrade and ultimately destroy” the group is an indictment of his conduct as a war leader. But the terrorists’ ability to carry out a mass slaughter in Paris made it obvious that it wasn’t just a matter of the West not winning the conflict, it was losing. Then after the San Bernardino attack, Obama also took the low-key approach in his speech to the nation from the Oval Office last week. Though he vowed to prevail, the overarching tone was again one that admitted no error. The only passion in the speech was devoted to his sermonizing about the dangers of Islamophobia, in spite of the fact that there was little, if any, proof of any surge in violence or discrimination against American Muslims.

There was none of that today as Obama played the commander-in-chief card. But what still came across was the president’s complete unwillingness to consider that his approach had not only yielded no results to date but that it was unlikely ever to do so.

What is most troubling though is the way the president spouted statistics about sorties flown, bombs dropped, or missions as if mere numbers could determine the outcome of a war in which possession of territory is not irrelevant.

It is true that any war between a military superpower like the United States and ISIS is, by definition, asymmetrical. But as much as Obama and Secretary of State Kerry cling to semantic games in which they refuse to acknowledge that the Islamic State is, for all intents and purposes, an actual state, ISIS or ISIL (as Obama prefers to call it) is reliant on its control of an actual territory to carry out its depredations and to continue its recruitment of would-be jihadis from throughout the world. Moreover, so long as it continues to hold that territory, it will continue to be seen as the “strong horse” that is beating the West and inspiring Islamists to believe that it will ultimately prevail no matter how asymmetrical the correlation of forces.

Hearing Obama talk about the statistical minutia of the war without referencing any clear plan as to how the ISIS caliphate will be liquidated in the foreseeable future one couldn’t help remember hearing George W. Bush and his team speaking in a similar manner about the Iraq War before the surge. It took three years of bitter stalemate and defeat before Bush mustered the courage to change course and order the switch that all but won that war before Obama tossed the fruits of that victory away with a precipitate defeat.

Going back even further into the history of American military folly, it’s hard not to hear echoes of President Lyndon Johnson and his Secretary of Defense Robert McNamara in Obama’s reassuring talk. They sought to prove that their bombing strikes and limited measures would bring North Vietnam to its knees. There’s little reason to believe that in the absence of a genuine ground campaign by forces determined to achieve victory that the president will avoid the same kind of disaster they experienced.

The president keeps telling us that there’s no alternative to his decisions but even he knows that’s not true. A real coalition aimed at beating rather than “containing” ISIS would require active U.S. involvement and the sort of confidence in Obama’s leadership that is impossible to imagine now.

Indeed, one key element of the president’s inadequate plan is his reliance on more diplomacy to end the Syrian civil war so that everyone can then concentrate on ousting ISIS. But since the formula for that peace imposed on the U.S. by the president’s Iranian partners involves letting the Assad regime stay in power, that leaves no path forward to success. If ISIS retains the loyalty of many in the region it isn’t only because of the élan of his brutal terror or the not unreasonable conclusion that it is winning. Rather, it also stems from a belief that ISIS will defend Sunnis against Assad or Iran. It’s too late to reverse the mistakes Obama made early in the conflict when his dithering allowed Assad to survive and ISIS to arise in the vacuum he left. But it is not too late to make it clear that the U.S. will not let Iran and Russia dictate the outcome of these wars or to consign a nation to a tyrant they despise.

Nor can they take much comfort from the fact that Obama’s “ISIL Czar” is Robert Malley, a former presidential law school classmate but best known as the leading apologist for Palestinian terrorists in the U.S. foreign policy establishment. Is the person who thinks outreach to Hamas murderers is the way forward for Middle East peace really the kind of a man who can coordinate a military victory over other Islamist terrorists?

No matter how many times Obama tries to tell us to keep calm and remember that he is always right, that doesn’t mean that it is true. Though Americans will like Obama’s vow that ISIS’s leaders can run but can’t hide to lectures about their own alleged prejudices, they’re still stuck with a war leader who isn’t resolved on victory. In the absence of one, they know the U.S. is losing. 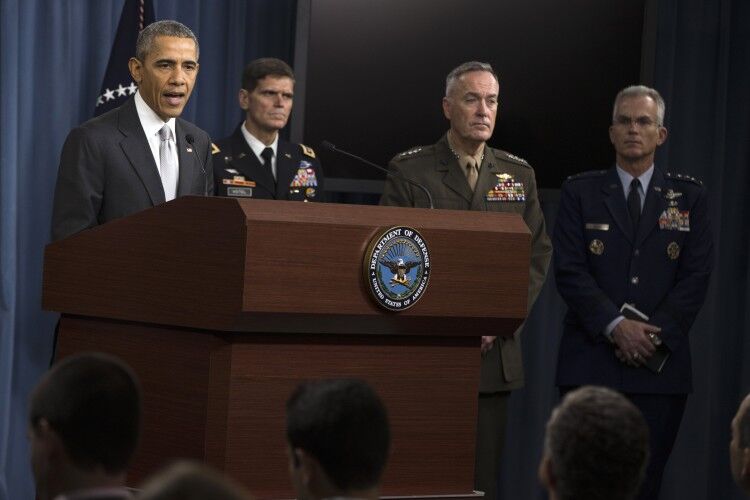