Tomorrow 28 foreign ministers will gather in Paris to start deciding how to solve the conflict between Israel and the Palestinians. But neither Israel nor the Palestinians will be present. Nor, based on the way they blew up the negotiations sponsored by Secretary of State John Kerry in 2014 and their subsequent refusals to resume talks with Israel, are there reasons to think the Palestinians will be any more willing to make peace with Israel now than they were before. Do they have any real hopes of finding a new formula that will satisfy both sides or any real hope of a positive outcome? If not, what is motivating the French and the rest of the Europeans to start a new process? The answer tells us more about what is wrong with international diplomacy in the 21s century than the obstacles to peace that the diplomats think they are trying to overcome.

The reason why optimism about the Paris conference is in short supply outside of the Quai d’Orsay is not exactly a secret. As veteran peace processor Aaron David Miller noted today in the Wall Street Journal, there is no reason to expect much that is good from this event. Without support from both of the parties or the enthusiastic backing of the United States, no Middle East negotiation is likely to succeed.

This is, as Miller correctly writes, a moment of transition. There will be a new American president taking office in January, and it’s pointless to expect anything to be accomplished before then even if there was a path to success and a will to push for it in Washington. President Obama may be itching for another confrontation with the Israeli government, and he may get one before he leaves office by laying down demands that he wants to serve as the parameters for future talks that Jerusalem will reject. But he won’t act on that impulse during the presidential campaign because to do so would hand Donald Trump a stick with which he could beat Hillary Clinton.

The difference in attitudes toward the Paris conclave from Israel and the Palestinians also tell us why it won’t succeed. The Palestinians like the idea of an international conference for two reasons. One is that it allows them to avoid direct negotiations where they would likely have to either accept or reject peace plans. The other is that they correctly believe that a conference where a gaggle of governments that are hostile to Israel’s government are present will further isolate the Jewish state and place minimal pressure on them to do what they have never done which is to actually accept terms of peace that would end the conflict for all time. By contrast, the Israelis keep saying that they will negotiate but only if it involves direct talks and not in a conference where the Europeans will gang up against them.

Leaving aside diplomatic strategies, the notion that the time is ripe for an agreement also ignores the basic fact that even if the Palestinian Authority and its leader were ready for peace, the Palestinians are hopelessly divided. So long as Hamas operates an independent state in all but name in Gaza that they use as a launching pad for terrorism, peace is on permanent hold. That’s because so long as Hamas is a factor, a further Israeli retreat from the West Bank and Jerusalem to create a sovereign Palestinian state is out of the question. That’s because it might mean allowing that area to become a repeat of Israel’s 2005 Gaza withdrawal experiment. Under those circumstances, it’s no surprise that the majority of Israelis think such a policy wouldn’t be so much a mistake as it would be insane.

With such poor prospects, why then is France bothering?

It’s likely that no one in Paris, let alone the capitals of the other 28 countries that will participate really thinks what they’re doing will be the first step toward an agreement. They all know that without the Israelis buying into it and the Americans backing it up, it’s a non-starter. But to ask those questions and get, as Miller observed, the obvious negative answers, is to misread the purpose of this event. It’s not about peace. It’s about setting a tone for future diplomacy in which Israel will no longer be given a say in its fate but presented with diktats that it can’t resist.

Though the Paris conclave is being presented as a first step toward another round of negotiations, the next step from a process that is designed for failure from the outset is not more talks. Rather, it is the prelude to an effort to impose a Palestinian state on the Israelis without first making either Abbas or Hamas make peace. The French understand that Abbas doesn’t want to negotiate with Israel because doing so would mean that, sooner or later, they’ll have to blow up the new talks or accept the legitimacy of a Jewish state no matter where its borders are drawn. What they want instead is a process that will allow them to continue to avoid doing either and that would, at least in theory, grant them international recognition for statehood. And since there is no chance of a positive result from anything that might follow from the Paris summit, the Palestinians are confident that the next step will not be another round of negotiations, either direct or indirect, but a transfer of the diplomatic battle to New York.

What this series of events sets up is a battle at the United Nations this fall that might culminate in another attempt by the Palestinians to get the Security Council to recognize Palestinian statehood in all of the West Bank, Gaza, and in the parts of Jerusalem that were illegally occupied by Jordan from 1949 to 1967. In the past, that has always been a non-starter because of American opposition and even recognition on the part of European governments that were not supportive of Israel that such a move must from a peace deal rather than preceding it.

But times have changed. The Europeans are more hostile to Israel than ever. Their justification for this attitude is their belief that Israel has taken a hard turn to the right and can cite the recent coalition changes in the Jewish state as proof that they are right. They conveniently ignore the fact that the Palestinians have repeatedly refused peace offers that would have given them a state. Moreover, if they were really interested in working with the Israelis they’d follow up on Netanyahu’s renewed embrace of a two-state solution and stated willingness to negotiate about the 2002 Arab Peace Initiative. But what can’t be ignored is the influence of a rise in anti-Semitism in Europe and the effect — however indirect it might be — on government attitudes toward Israel. There is no cost for treating Israel unfairly or giving the Palestinians a pass for their support for terrorism is and benefits to be had in terms of domestic and foreign applause.

At the same time, those planning these events know that after Election Day, President Obama will have a couple of months when he will feel free to settle scores with Netanyahu without having to worry about its impact on the presidential election. Whether that means a U.S. initiative to impose terms about borders, settlements, Jerusalem and refugees on Israel or merely a decision to not veto a Palestinian independence resolution in the Security Council, it’s clear that Obama has something up his sleeve before he leaves office.

What will begin tomorrow in Paris won’t lead to diplomatic progress but it must be considered as the start of an effort whose certain failure will serve as an excuse for imposing dangerous terms on Israel. As with past such efforts, the only thing that it will encourage will be more Palestinian intransigence and a new round of terrorist warfare. Those who want to encourage peace rather than the isolation of Israel must hope that the next president — whoever he or she might be — will seek to influence Obama from making things worse and make sure the world knows that they will have Israel’s back once they take office. Failing that, what the French start with lofty rhetoric about peace will likely only end in more bloodshed. 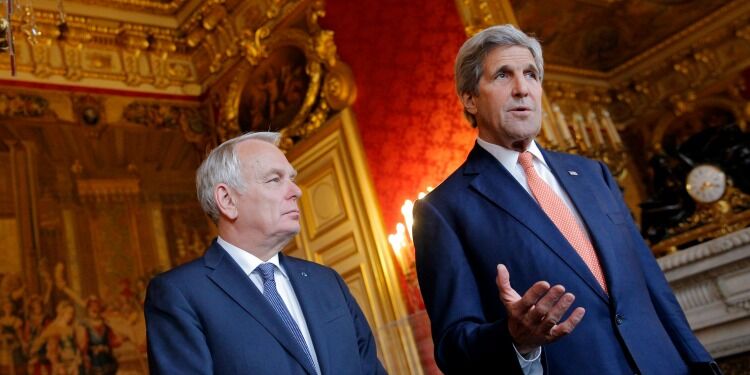