For those who thought that the Obama administration would fade away quietly in its last weeks in office without a parting shot at Israel, Secretary of State John Kerry has a message: They’re not done yet. Yesterday, while speaking at the Saban Forum at the Brookings Institution in Washington, Kerry let loose with a harangue that put all the blame for the lack of Middle East peace on Israel. He gave the Palestinian Authority and its undemocratic leader, Mahmoud Abbas, a pass for their refusal to negotiate seriously. He concentrated his fire on Prime Minister Netanyahu and other members of his government for “ignoring all our warnings about settlements” and dooming the prospects for a two-state solution. More than that, Kerry specifically hinted that the door was still open for a U.S. initiative at the United Nations Security Council before Donald Trump is sworn into office, which would undermine Israel’s negotiating position and possibly brand it as an international outlaw.

Kerry’s rant indicated that, despite last week’s AP report that the president already determined it would be a mistake to attack Israel in this fashion during this lame-duck period, many administration officials are, as Haaretz reported, still desperately trying to persuade him to the contrary. Clearly, Kerry is one of those doing so. His Saban remarks, which came almost immediately after speech by Netanyahu at the same conference, is a sign that his campaign against Israel is far from over.

The secretary of state is right that a great many members of Netanyahu’s Likud Party and some of his Cabinet ministers are strong supporters of the settlement movement. It’s equally true that, while Netanyahu has repeatedly expressed his support for a two-state solution and demonstrated his willingness to talk with Abbas, most of his government and a clear majority of Israeli voters have given it up as a viable policy for the foreseeable future. That is not because most Israelis don’t want peace. They do, but, unlike Kerry and the rest of the Obama administration, they are not in denial about the Palestinians.

Kerry bizarrely referred to Abbas as “committed to non-violence” even though the Palestinian leader has continued to send mixed signals about how committed he is to peace. Abbas has made some diplomatic gestures, but he continues to laud terrorists as heroes and martyrs, pays these killers and their families pensions, and allows his official media to spread hate against Jews and Israelis. Sometimes he evens joins in himself, as when he helped foment the “stabbing intifada” by spreading canards about Israel plotting to harm the Temple Mount mosques. Most important, Abbas refused to negotiate seriously with Netanyahu even when the prime minister offered to give up most of the West Bank. Nor has he recognized the legitimacy of a Jewish state no matter where its borders are drawn, a sign that he doesn’t really intend to end the century-old war against Zionism that has become an inextricable part of Palestinian national identity.

To Kerry, none of that matters because of the settlements. The secretary refuses to understand that building a few more houses in existing communities doesn’t mean that Israel wouldn’t or couldn’t give up territory if Abbas were ever to take yes for an answer. He ignores the fact that the Palestinians have repeatedly refused to accept Israeli offers of statehood. The focus on settlements is a flimsy Palestinian excuse for not making peace–not the substantive obstacle Kerry falsely claims it to be.

Kerry was also right when he said the Arab states wouldn’t make formal peace with Israel without an agreement with the Palestinians. But Netanyahu’s assertion that the Arabs are far more worried about an Iran that has been empowered and appeased by Obama and Kerry than they are about the Palestinians is also correct. Formal relations may have to wait, but, despite Kerry’s warnings, Israel’s diplomatic position is not as weak as he claims.

From Obama’s first moments in office, his administration has been committed to the idea that more “daylight” between Israel and the United States would provide a path to peace. Eight years of ginned up fights with Netanyahu and tilting the diplomatic playing field in their direction has only encouraged the Palestinians to be more intransigent. More daylight has been an abysmal failure, and, in characteristic fashion, Kerry would rather double down on this disaster than admit he’s been wrong.

Stabbing Israel in the back at the UN won’t bring peace any closer either, but Kerry prefers to leave the State Department with a gesture that would damage Israel and hamstring his successor rather than simply go home. It can only be hoped that Obama will listen to the better angels of his nature and to those who tell him that acting in this manner will only provoke President-elect Trump to embrace Israel even more closely rather than Kerry’s bitter and foolish advice. 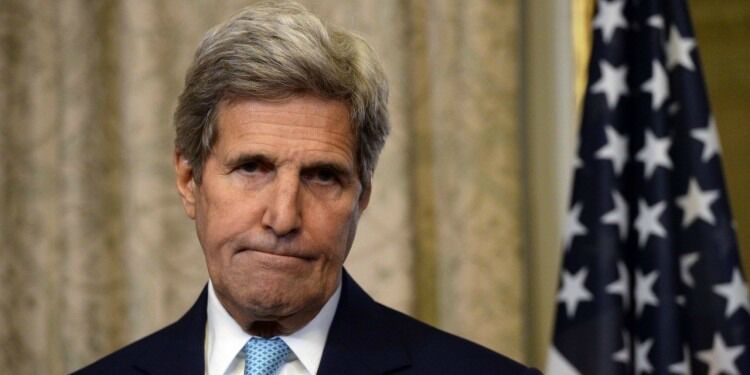