Getting between a politician and a live microphone is always a perilous occupation but there was probably no more dangerous place in America than the spot next to Kim Davis yesterday as she was released from jail. A judge let the nation’s most famous county clerk out of jail on Monday afternoon after spending five days in prison for refusing court orders to issue same-sex marriage licenses. Davis emerged from the Carter County Detention Center undaunted by her experience and seemingly comfortable assuming the role of social conservative martyr. But next to her and holding her hand aloft in triumph was none other than Mike Huckabee. The Republican presidential contender had spent the previous few days speaking of Davis as a political prisoner and he did his best to milk the occasion for all it was worth declaring to the cheers of the crowd there that if the courts were to order her back to jail, he would be prepared to go in her place. Ted Cruz, the other presidential candidate in attendance, was left standing on the sidelines while former Arkansas governor hogged the spotlight. But the question after this spectacle unfolded wasn’t so much the fate of Davis, who is unlikely to be allowed the opportunity to hinder the issue of marriage licenses but whether Huckabee’s exhibition can inject some life into his flagging presidential candidacy even as it does damage to the effort to defend religious liberty.

Huckabee entered the 2016 race as a long shot candidate and, to date, has given few indications that he can recapture the magic he found in Iowa in 2008 when he won the caucus on his way to being the runner-up to John McCain for the GOP nomination. He current sits in ninth place in the Real Clear Politics average of national polls at four percent and in 8th place in the RCP average of polls in Iowa with an equally dismal 3.2 percent. While he is far behind current leaders Donald Trump and Ben Carson, just as significantly he trails Cruz, who is fifth in the national polls and third in Iowa. That’s a crucial gap since that places the Texas senator as the leading candidate of social conservatives and evangelicals with the others hoping to win the votes of that sector such as Rick Santorum and Bobby Jindal far behind both of them.

But if Davis’ predicament provided an opportunity for these candidates to try and outdo each other in proclaiming devotion to the social conservative cause, there’s no question as to which of them won the competition. Huckabee’s ability to seize the moment as her chief defender earned him the sort of television airtime that has been in short supply for Republican contenders in the summer of Trump.

Will that translate into a much-needed boost in the polls for Huckabee? Maybe. With all of the Republican candidates save Trump and Carson currently lingering in single digits in both the national polls and Iowa, anything, even Huckabee’s ridiculous exhibition in Kentucky, that allows anyone of them even a marginal advantage, could be crucial. That’s especially true if, in the coming weeks, the race sorts itself out with only a few of the contenders appearing to be in contention. Those at the bottom of the pileup may soon find themselves running short of money just at the time when they need to ramp up activity in Iowa and New Hampshire.

But what we will also find out in the coming weeks as Huckabee seeks to continue to exploit Davis’s imprisonment is whether social conservatives are as lacking in discernment about this issue as the former Fox News host thinks they are.

Huckabee’s main assets are his affability and his passion and the Kentucky story gave him a great chance to exhibit the latter. But the problem with the effort to anoint Nancy Davis as a social conservative heroine is that even many of those who worry, as they should, about the way Supreme Court’s ruling on gay marriage might infringe on the religious liberty of some Americans who disagree, understand that the Rowan County clerk was in the wrong.

The whole point of the arguments that have roiled the nation about gay marriage hasn’t been an effort to prevent those who want to marry from doing so but about efforts to compel other citizens to participate in these ceremonies against their will. The cases of florists and bakers who refused to provide floral arrangements or to bake a cake celebrating gay marriages, clearly illustrated the way in which the newly-minted majority on this issue was prepared to wrongly punish individual dissenters. But Davis is not a private citizen but a public official who is bound by her oath to follow the law.

Even the most fervent conservative critics of the court ruling are probably the same people who have been up in arms about President Obama’s effort to evade the Constitution on other issues such as his executive orders on illegal immigration or his Iran nuclear deal. While one should never underestimate the susceptibility of both the left and the right to hypocrisy, surely even Iowa’s hard-core social conservatives understand that what Huckabee is praising in Davis is the same cavalier approach to the law that they despise when Obama practices it.

Huckabee thinks there’s political gold to be mined in Kentucky and I suppose he might be right. But if even his core constituency may be smarter than he thinks. Those who hope to rally Americans behind the effort to protect citizens against the real threat to religious liberty posed by the administration and understand how the Davis case undermines their cause, certainly hope so. 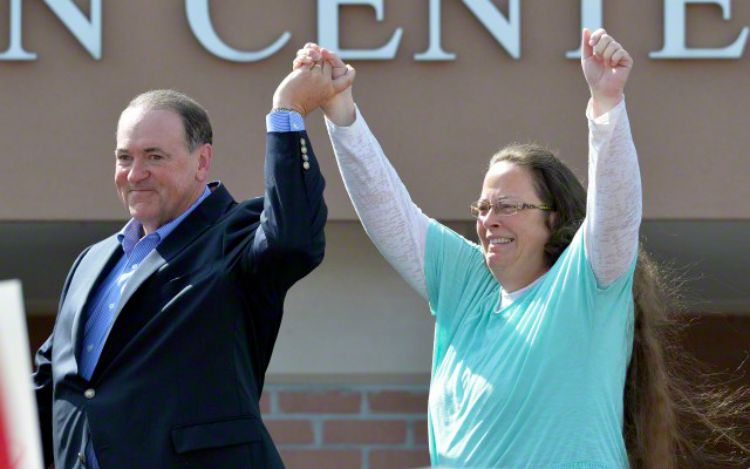