It’s a story that ought to have demonstrated why peace between Jews and Arabs is possible. In the aftermath of a drive-by shooting of Jewish travelers near the city of Hebron, a Palestinian couple came to the assistance of the survivors and gave first aid until help arrived. But there’s a catch to this heartwarming demonstration that decency and a sense of common humanity can transcend even the most bitter conflicts. Rather than take credit for being good Samaritans, the Palestinian family chose not to be identified—and that tells us all we need to know about the nature of the conflict.

The brutal attack took the life of Rabbi Miki Mark and left his wife Chavi seriously injured. When the Palestinian couple arrived at the scene, they found the family car overturned on the road with the victims’ two children trapped in the backseat screaming. According to the Times of Israel, which spoke to these two volunteer first responders, they pulled the Marks’14-year-old daughter Tehila from the wreckage and the Palestinian woman, who was a doctor, sought to staunch the bleeding from her abdominal wound and called an ambulance. They also pulled out the Marks’ 15-year-year-old son Pedaya, gave him first aid, and comforted the two children.

In a New York Times account published later, another Palestinian doctor who arrived later at the scene took credit for giving the two wounded children medical assistance. He identified himself as Dr. Ali Shroukh. That story expounded upon the idea that other Palestinians warned him to leave the scene as soon as possible since, they supposedly said, he would be set upon by Israelis arriving at the scene or arrested as a suspect by the authorities (though why anyone would think a person rendering assistance to terror victims would be have been of the terrorists wasn’t explained).

But what was missing from either story were the names of the Palestinians who were the first ones to help. You would think the Arab media would be besieging these people in an effort to show the world a positive image of Palestinians. It’s no mystery why that didn’t happen. Palestinian terrorists who kill Jews and Israelis are honored as heroes by the official Palestinian media and paid pensions by the Palestinian Authority that is supposedly run by “moderates.” Violence against Jews, especially those who live in the West Bank, is considered not just understandable but behavior that should be lauded. There are no shows on Palestinian TV about those who put aside the century-old war of two peoples over one land but there are regular shows honoring the sort of people who created the carnage that was visited upon the Marks. Helping Jews in need is treated as treason by mainstream Palestinian political culture, not an example of true heroism.

There has been a conscious effort on the part of many journalists stationed in Israel to portray settlers as just as, if not more hateful than Palestinian terrorists. And, true to form, reporting from the emotional funeral of Rabbi Mark noted that there were some who cried out for “revenge.” Significantly, the Marks children asked anyone who spoke in that manner to leave. The same thing happened when someone posted an insulting remark about Arabs on Facebook, Chavi Mark’s sister criticized anyone who would generalize rather than understanding that those who committed the crime were terrorists and the guilt belongs to them and not all Palestinians.

Such sentiments are mainstream opinion even among settlers, a fact that is borne out by the fact that, although the Western media hypes every reported instance of settler violence, such attacks are statistically rare. That is especially true when that total is compared to the numerous Palestinian attacks on Jews that occur literally every day, though not all end in fatalities.

It is to be hoped that Dr. Shroukh does not suffer retaliation from the same people that killed Rabbi Mark or other Palestinians that cheer the current wave of violence. If his behavior were not the exception that proves the rule, the long war between Jews and Arabs might be resolved by compromises about borders. When it is possible for every Arab who assisted Jewish terror victims to come forward without fear or retaliation and Palestinian media treats the killers of Rabbi Mark as shameful criminals, then we will know that the time is ripe for peace. 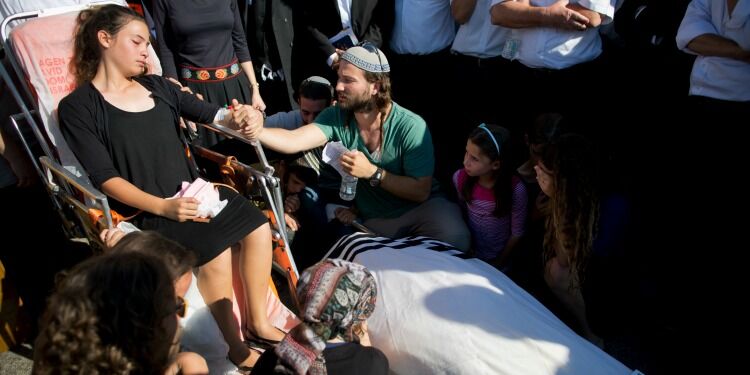