For something that has zero chance of actually happening, President Obama’s nomination of Merrick Garland to the U.S. Supreme Court is getting an awful lot of publicity. The White House has made the campaign for Garland a priority. They’ve made the effort to orchestrate more meetings between the president’s pick and Republican senators seem like a tense drama as some GOP senators, including incumbents facing tough re-election fights, have offered to sit down with the judge. The administration’s political operatives are doing their best to frame the controversy as a matter of disrespect being shown to the president by Republicans. In turn, Obama has also done his best to add to the mix, too. In particular, he went to the University of Chicago yesterday to deliver a talk in which he lectured Republicans about the evils of partisanship.

Obama’s partisan fans, including the cheering section in the press corps, may be applauding these stunts. But the Democrats’ effort to seize and hold what they claim to be the moral high ground is just so much hot air. If we strip away the theatrics on Capitol Hill and the president’s predilection for talking down to his opponents, it’s clear that Garland, a distinguished liberal jurist, is merely playing the role of a pawn in service to one party’s turnout efforts.

Since this fight began in the aftermath of the death of Justice Antonin Scalia, it’s been necessary to point out that hypocrisy has been dominant note of this entire discussion. Nor is it only Obama and the Democrats who are guilty of it since if it were a Republican president seeking to force a Democratic-controlled Senate to bend to the will of the executive, they, too, would be taking a completely different position.

As I’ve previously discussed, past speeches of both Vice President Joe Biden and Senator Chuck Schumer, indicating that they would oppose an election year Supreme Court appointment from a Republican president gives the lie to their righteous indignation that pair and the rest of their party are spouting about the GOP refusal to confirm Garland under similar circumstances. No amount of spin or claims that their quotes were taken out of context can gainsay the fact that they were warning that they would do the same thing Majority Leader Mitch McConnell is currently doing.

But President Obama’s hypocritical stance in his speech at the place where he used to teach law is especially egregious. The first reason for that is that the record shows that Obama is one of the chief hypocrites on this issue. During the course of his attempt to filibuster the debate over the nomination of Justice Samuel Alito, he put forth a full-throated defense of ideological reasons for refusing to confirm a judge even if they were both legally qualified and ethically pure. What Republicans are doing today is no different from what Obama did in 2006.

In his remarks, the president was right to say that a fundamental shift had occurred in the last generation that had politicized the Supreme Court nomination process. Our politics are more polarized and ideological. The kind of divided government we have now does have the potential to create an almost permanent logjam in choosing judges. That may well help to undermine confidence in the system and as a participant in this effort, the president might enhance his credibility if he included a mea culpa for his own record of doing what he now deplores.

But even if we look past Obama’s hypocrisy, his prediction of doom rings hollow. When he says that the refusal of conservatives to confirm a liberal judge may reduce the nomination process to being, “just a majoritarian exercise in the Senate of who controls the presidency and who controls the Senate,” we are forced to ask what is so bad about that? Moreover, what is the alternative that he is proposing that will enable us to transcend partisanship?

The alternative to that “majoritarian exercise” that he offers the GOP is simple: surrender. Republicans are told that they must allow a shaky 5-4 conservative majority in which a swing vote cast by an unpredictable Justice Anthony Kennedy determines close cases to become a solid 5-4 liberal majority enabled by Garland’s confirmation. They must do so, Obama says, because it is good for democracy for us to transcend partisanship. But in order for that argument to work, then both sides must do so.

The president and his apologists may say that he has done that by nominating a relatively moderate liberal in Garland, but that is mere spin. As the New York Times, the flagship of the liberal mainstream media pointed out, an analysis of his decisions show Garland is actually to the left of Justices Elena Kagan and Stephen Breyer putting him in the middle of the liberal faction, not a moderate swing vote. That makes the argument that Republicans would do better to confirm Garland rather than to risk the confirmation of an even more liberal justice by a President Hillary Clinton and Democratic Senate next year an empty threat.

So all the president offers his opponents is the right to capitulate to him, and that is something they may be forgiven for not doing. After all, “majoritarian” politics in which the branches of government may balance each other’s desires is not a Republican idea. It is the way of the Constitution and American democracy.

A GOP surrender on Garland won’t fix the system. All it will do is to enable one side of the current political divide to solidify their hold on the judiciary. That may well happen if the voters hand control of the White House and the Senate to the Democrats next year. And if so, then as much as they may not like such a result, conservatives will have no choice but to accept it. But given the unprecedented nature of this standoff — a Supreme Court vacancy that could flip control from one ideological camp to the other occurring in a presidential election year with the presidency and the Senate controlled by two different parties — waiting for the voters to decide would actually be the only way to get an outcome that all sides to the argument would admit was fair.

That’s why, although some Republican senators may decide to meet with Garland, their leadership will stand their ground and refuse to let the charade go any further than that. Both sides know that making any effort to put this issue to a vote by parliamentary procedure to be just as much of an exercise in futility as GOP votes to repeal ObamaCare.

That is also why all the discussion about senatorial meetings with the nominee and even the White House effort to keep the issue in the public eye must be put down as nothing more than theatrics intended to rile up the president’s so they will turn out to vote this November. Which is to say that what the president is doing is more of exactly the same political games that he claims to deplore. Having come into the presidency claiming to want to elevate the tone of our politics, the president spent his two terms doing the opposite, consistently demonizing his opponents and seeking to impose his ideological goals by any means necessary. We can either deplore or applaud his actions depending on whether we support those goals. But he should spare us the lectures. If he wants to know what has gone wrong in Washington, he can start by looking in the mirror. 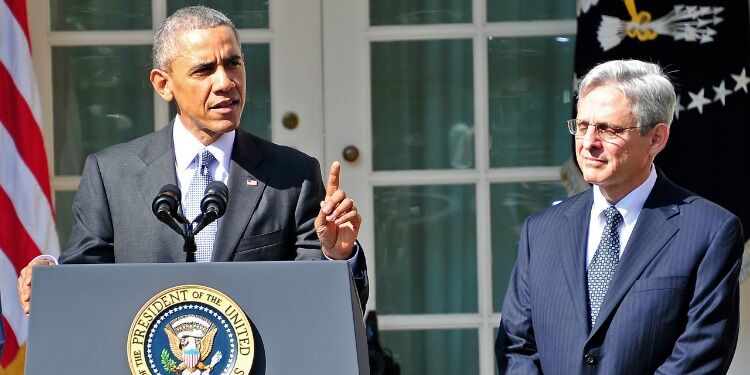