If Donald Trump didn’t have enough going for him in this wacky primary season, it appears that Mitt Romney has provided even more fodder for the GOP frontrunner’s rants. Right after Romney gave his anti-Trump address at the University of Utah, I wrote that his was the right message delivered by the wrong messenger. But even I didn’t quite understand just how useful Romney would be as a stick with which Trump could beat the dreaded Republican establishment. In the days since then, Trump has held up Romney as a symbol of all that is wrong with the Republican Party, a loser who “choked” and handed a winnable election to Obama in 2012. Trump is entitled to point out that Romney wasn’t so critical of him when he was asking for his support four years ago. But his insistence that a GOP candidate that worked harder or who was a winner like him could have beaten Obama isn’t just wrong or one more talking point for Trump that keeps the focus on every colorful thing that comes out of his mouth. It’s a myth that is helping to lead Republicans down the path to another disappointing defeat in 2016.

Let’s start by acknowledging that what Trump has been saying about 2012 is something that most conservatives ardently believed throughout President Obama’s first term. They correctly assessed Obama as a failed president whose only major legislative accomplishments — ObamaCare and the stimulus — had been passed by narrow partisan majorities and were deeply unpopular. The GOP midterm landslide of 2010 that won them back control of the House of Representatives led a lot of very smart people to think that this was the prelude to another GOP victory two years later. They were sure that any competent Republican could beat a president with such a thin resume of accomplishments and any evidence to the contrary was resolutely ignored.

At the heart of their assumptions was the notion that 2008 was an outlier election. They knew Obama and the Democrats had swept to a victory that gave them control of the White House and Congress was a function of the unpopularity of the George W. Bush administration and a massive turnout of young people and minorities. They were sure that both of those factors would not continue to play a major role in 2012. They were wrong about that.

Though much of what the left said about Bush was wrong, the notion that his was a failed presidency was still widely accepted. Republicans also profoundly underestimated Obama’s personal appeal as well as his historic status as our first African-American president.

Though his charms were lost on conservatives, Obama was and still is seen by most Americans in a positive light. They may not agree with all or many of his policies, but non-conservatives don’t dislike or hate him they way so many on the right do. Nor were they prepared to oust a president whose election made so many feel so good about their country and themselves for having righted a great historic wrong after only four years. A majority of Americans were always prepared to give him the same two terms they had given Bill Clinton and George Bush and it was willful blindness on the part of many in the GOP that led them to ignore the potency of this sentiment.

But the problem wasn’t just that Republicans didn’t understand Obama’s strength or his immense political talent even if they were right that it wasn’t matched by an ability to govern competently. They also failed to understand that the changing demographics of the electorate required the GOP to acknowledge or at least adjust their view of what works. Obama’s ability to mobilize minorities to come out to the polls in greater numbers than they had before didn’t evaporate after 2008. Most conservatives believed polls that showed Obama ahead throughout 2012 were wrong because they believed minorities and young voters wouldn’t show up for him again. That was a mistake that they were only able to acknowledge once the dust settled and Obama was re-elected.

But the realism that settled in after November 2012 quickly dissipated. The GOP’s much-discussed postmortem pointed out the idiocy of a Republican Party determined to alienate the growing Hispanic population. But anger over illegal immigration grew after 2012 — something for which President Obama’s extra-constitutional executive orders deserve credit — and the Republicans have dug in their heels even further on this point.

Republicans won another midterm landslide in 2014 due to three factors: the continuing unpopularity of Obama’s policies, the lower turnout in off year elections that leaves many Democrats at home and the party establishment’s ability to nominate mainstream candidates that could win rather than right-wing outliers that were doomed to lose, a factor that allowed the Democrats to hold on to the Senate in 2010 and 2012. That last point is something that Republicans who are determined to nominate an outlier for president seem to have forgotten.

But as 2016 dawned a lot of Republicans still believe the key to victory is to turn out missing conservatives who stay home or to win so much of the white vote that the Democratic advantage with minorities, young voters and women is overcome. That’s the key to understanding Donald Trump’s strategy.

Trump thinks he can win by bringing over so many so-called Reagan Democrats that he can put normally blue states into play while holding on to all the red ones. But his presence on the ballot is likely to play the same factor in generating minority turnout in 2016 that Obama did in the previous two election cycles. He also may strengthen the Democrat’s grip on women and young voters. All of which means that assuming that Hillary Clinton isn’t indicted — something that I continue to believe President Obama will never allow to happen — Trump will have to win what some estimate will be 70 percent of white males in order to prevail in November. That’s theoretically possible but pretty unlikely.

The point here is not just that it’s foolish to blame Romney for losing in 2012. He was a poor candidate and made mistakes, such as his infamous “47 percent” gaffe, that cost him dearly. Trump is right that having him try again this year would have been a terrible mistake. But it is impossible to argue that any other candidate that ran in 2012 or even any that didn’t choose to try (including Trump) could have done any better against Obama. The GOP didn’t fail that year because Romney was a “loser.” Nor was it because he was insufficiently conservative though it is true Republicans needed to turn out more of their base. They lost because they failed to make an appeal to segments of the country they thought they could safely ignore.

If Republicans think they can win this year by again appealing to an electorate that no longer exists, they are essentially repeating the same experiment while expecting a different result. Trump has a vise-like grip on a plurality of GOP primary voters (especially when Democrats are allowed to cross over), and that may carry him to the nomination. But polls continue to show him being beaten by Clinton while other Republicans beat her. He may get more white working-class males to back him than any other possible Republican candidate, but he will lose even more of the rest of the electorate than Romney did, setting up a possible Democratic landslide.

Anger about illegal immigration and Obama’s actions have clouded Republicans judgment to the point where they are forgetting why they really lost four years ago. Trump may relish having Romney as a whipping boy for the much-despised establishment. But his talk about 2012 also ought to be a useful reminder for Republicans to remember the lessons of that election. 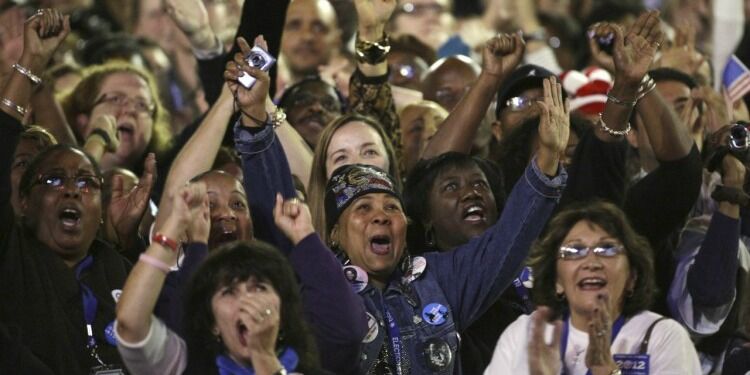