The Palestinians have responded to recent statements from the Trump transition team in a predictable manner. They’re treating the possibility that at long last a U.S. president will make good on a campaign promise to move the U.S. embassy to Israel from Tel Aviv to Jerusalem as an outrage. Top Palestinian negotiator Saeb Erekat put Trump and the Israelis on notice yesterday in a conference call heard at a Wilson Center policy forum. Erekat said the Palestinian Authority would revoke its recognition of Israel—which was part of the Oslo Accords—and claimed that popular Muslim outrage about the belated U.S. recognition of where Israel’s capital has been for the past 67 years would force the closure of every American embassy in the Arab world.

While their withdrawal of recognition is a bluff, given the desire of the Palestinians to stir up as much trouble for the U.S. as possible if the embassy move happens, Erekat may be right about the latter prediction. But critics of the incoming administration, instead of merely bemoaning the possible ramifications of Trump’s plan and referring to it as a deathblow to the two-state solution, should perhaps ask themselves why it is the Palestinians are so mad about the prospect?

The usual answer is that U.S. recognition of any part of Jerusalem as being sovereign Israeli territory and the country’s capital would prejudge the outcome of peace talks that would set the borders of a putative two-state solution. The State Department has insisted that any change in America’s diplomatic arrangements are permanently on hold awaiting the conclusion of a peace treaty.

But those who consider Trump’s possible embassy coup an attack on the two-state solution have it backwards.

The whole point of those pushing for withdrawal from the West Bank and for re-dividing Jerusalem in order to create an independent Palestinian state (in addition to the one that already exists in all but name in Gaza that is run by Hamas), is to force Israel to treat the 1967 lines as the border between the two countries. That’s why President Obama demanded that the 1967 lines be the starting point for all negotiations. But if the 67 lines are to be considered sacred then that also means that West Jerusalem—the parts of the city that were not illegally occupied by Jordan during the War of Independence and which functioned as Israel’s capital from 1949 to 1967—really is part of Israel and should be treated that way.

If the Palestinians see a two-state solution as the goal, they’d have no problem with a U.S. embassy in the city as long as it was accompanied by a similar resolve to employ another one in an Arab neighborhood as the American embassy to Palestine. Considering that the U.S. consulate in Jerusalem is located in such an area and that it functions for all intents and purposes as an embassy to Palestine then this would be a strong talking point for Erekat and the PA.

But they have no interest in even posing such a demand because they still see the conflict as a zero-sum game rather than a rational negotiation seeking a solution to end the impasse.

Peace process advocates have always tried to rationalize the the Palestinians’ repeated refusals of Israeli peace offers including statehood and the share of Jerusalem they’ve demanded as mere happenstance—a result of bad timing that was usual the fault of the Israelis. But the repeated failures of the talks are not the result of coincidences. Rather, they are functions of a Palestinian mindset that continues to view peace as something to be avoided rather than embraced.

When it comes to Jerusalem, the Palestinian stance is particularly revealing. In their diplomatic campaign to isolate Israel they have claimed that the Temple Mount and even the Western Wall are exclusively Muslim shrines, denying Jewish ties to these holy sites and the city as a whole. Just as they view cities such as Tel Aviv as being as much an example of an “illegal settlement” as the most remote hilltop encampment in the West Bank, so, too, do they deny the right of Israel to any of Jerusalem.

In addition to rectifying an anomalous and unjust situation that treats Israel differently from every other country in the world, an embassy move could jumpstart peace talks and give them new urgency. A U.S. embassy in Jerusalem that treated only the city’s Western sector as part of Israel would actually be step toward a two-state solution that would envision an Arab capital in the rest of the city, assuming the Palestinians actually wanted one. The opposition of the Palestinians to such a step—and their hope that the rest of the Arab world can be persuaded to riot to back up their stance—is a tipoff that they are still stuck in a mindset that is opposed to real peace. It’s time those Americans and others who claim to be supporters of peace caught on to this disturbing truth. 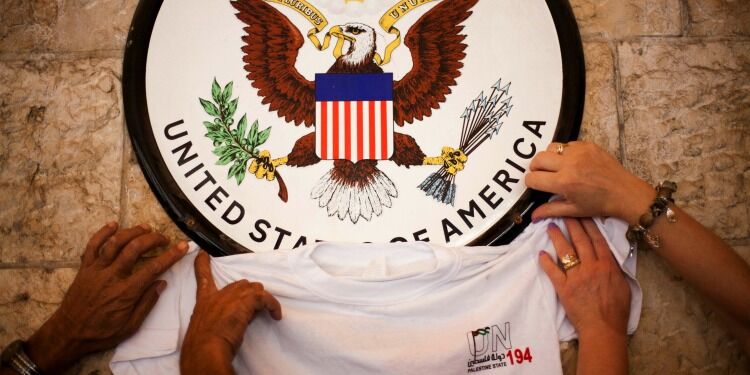