It could have been worse. Many feared that President Obama would not be able to resist his impulse to apologize for the United States when he spoke at Hiroshima. But thankfully, when the speech was finally delivered, there was no apology for President Truman’s necessary decision to drop the first atomic bombs on Japan in order to force them to finally surrender. Instead, the president gave a fairly anodyne address that invoked the suffering of the victims and decried the inhumanity of war. His sentiments were generalized and, to a large extent, unexceptionable. They might well have been delivered by any of his recent predecessors. But along with the bromides about the horror of armed conflict, the president did slip in a gesture toward actual policy: his desire to work toward the abolition of nuclear weapons.

Removing the threat of more nuclear devastation is, in principle, a laudable goal even if it is not one that is, as the president correctly noted, not one that can be achieved in his lifetime. Yet the irony here is that the dangerous policies pursued by this president have done more than any other to make it possible that such horrors might be repeated. That’s why, despite the universal applause for Obama’s support for nuclear abolition, the retention of a credible and powerful U.S. nuclear deterrent, as well as the need to prevent the spread of such weapons, must remain imperatives for U.S. foreign policy for the foreseeable future.

Any presidential trip to Hiroshima was bound to be problematic, which is why, despite the close friendship between Japan and the United States, Obama’s predecessors have avoided it. Despite their successful transition from imperial tyranny to democracy, the Japanese have never come to terms with their role as not only the illegal aggressors who are solely responsible for the spread of World War II to the Pacific, but have also refused to take full responsibility for a record of racism and atrocities against other Asian peoples as well as Allied prisoners that, in some respects, rival that of the Germans. The Japanese tend to think of the war as an event that began at Hiroshima and ended at Nagasaki where the second American bomb was dropped, leaving out their invasions of Manchuria and China, the rape of Nanking, and countless other atrocities — not to mention their surprise attack on Pearl Harbor. An American apology for Hiroshima would have been deeply wrong because it was only by the use of nuclear weapons that Japan’s leaders were convinced to give up a war that would have cost countless more lives if it had continued.

It would be grading Obama on a ridiculous curve to give him credit for not apologizing. But we must at least acknowledge how remarkable it is that a president who has seemingly spent much of his presidency decrying America’s role in the world resisted the temptation to do so when it came to this chapter of our history. He even made a slight gesture toward pointing out that, the war that ended with the dropping of nuclear weapons was started by a Japanese empire acting out of, “the same base instinct for domination or conquest that had caused conflicts among the simplest tribes, an old pattern amplified by new capabilities and without new constraints.” But because he chose, perhaps for understandable reasons given the need to prop up Japan against threats from China and North Korea, he was vague about which country exemplified these characteristics, the Japanese will assume he was talking about the United States as well as Japan.

That Obama would talk about the goal of banning nuclear weapons was a given not only because it was very much what the Japanese want to hear as well as in keeping with his own beliefs. Were we to grade him on a steep curve we could also give him credit for at least saying such a ban is not something that will happen in his lifetime, making his rhetoric nothing more than a pious sentiment rather than a realistic policy.

But even if we were to grade him in this fashion, it must be understood that the threat of nuclear proliferation during the last eight years is not, as the president’s talk about removing this threat, a purely theoretical endeavor. The context here is not just Donald Trump’s wild and utterly irresponsible comments about allowing Japan and South Korea to develop nuclear weapons in response to the threat from North Korea. While it is impossible to know what, if anything, really can deter that mad regime and its unstable communist dictator, we do know that the one essential element for stability is the maintenance of overwhelming U.S. power — both in terms of conventional arms as well as a credible nuclear capability — to remind both a rising China and the North Koreans that American allies will never be left defenseless. The problem is that under this president belief in America’s willingness to stand with its allies or to use power has not been unquestioned.

Yet for all of the questions about the depth of America’s commitment to exercising its responsibilities in Asia, the greatest damage done to traditional U.S. efforts to stop the spread of nuclear weapons lies elsewhere. President Obama’s quest for détente with Iran wasn’t primarily about the question of the nuclear threat from the Islamist regime. As we now know, his desire to reach out to Iran transcended any interest in requiring the dismantling of their nuclear program as he promised during his 2012 re-election campaign. That’s why during the course of negotiations with Iran he dropped virtually every Western demand that would have ensured that their nuclear ambition would be completely removed. Instead, he made concessions that not only allow the program to continue with Western approval but ensure that once the deal expires in a decade it will be relatively easy for them to get their nuke.

Historical analogies are always inexact and often problematic. But it is worth pointing out that the war that ended with the dropping of nuclear weapons began as a result of Western appeasement of aggressors and tyrants like Germany, Italy, and Japan. Bill Clinton’s appeasement of North Korea failed to stop that nuclear threat. Barack Obama’s effort to let Iran “get right with the world” will similarly make it more likely that the Middle East, and the rest of the planet, will become even more dangerous and put the ultimate weapon in the hands of genocidal ideologues. American weakness and foolish faith in appeasement are a prescription for peril which is why whoever succeeds this president must retain and strengthen the U.S. nuclear deterrent.

Despite his soaring and often appropriate rhetoric at Hiroshima, the sad truth is that Obama’s policies have made it more rather than less likely that another nuclear bomb will ever be used. 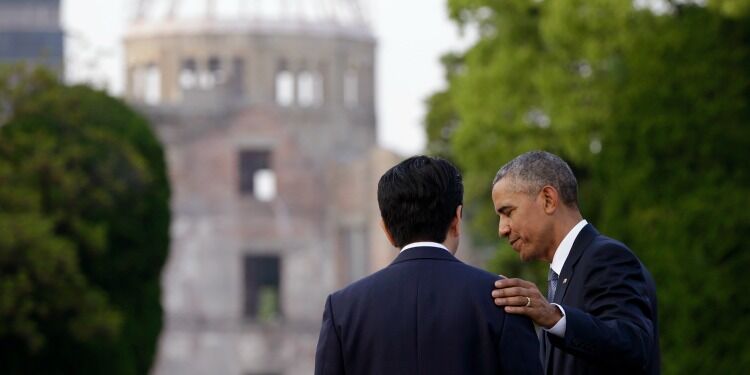