In his last month in office and apparently no longer in thrall to party activists and special interests, Philadelphia Mayor Michael Nutter did the right thing. In May 2014, to the applause of influential Hispanic activist groups, the Democrat ended all cooperation with federal immigration authorities and instituted one of the most aggressive “sanctuary city” policies in the country. Claiming that Immigration and Customs and Enforcement (ICE) had been “overly aggressive” in requesting that that city keep in its custody illegal immigrants who would otherwise be released from jail pending trial, Nutter had signed an order ending Philadelphia’ compliance with such requests. But in December, with weeks to go before his two-term reign on Broad Street ended, Nutter did the right thing and rescinded this particular form of sanctuary city madness. But on his first day in office, his successor Jim Kenney signed an order reinstituting the measure.

From now on, Philadelphia law enforcement officials are officially barred from cooperating with federal immigration authorities. Kenney says he will listen to Homeland Security Secretary Jeh Johnson when he comes to the City of Brotherly Love to beg him to rescind the rule, but unless he’s convinced that “immigration stakeholders” (i.e. advocates for illegal immigrants being granted complete impunity from law enforcement officials) believe they “have input into the process,” police in the city where the American republic began will treat the feds like a foreign power. From now on, even those illegals that are charged with murder, rape, robbery, domestic violence, illegal possession of a firearm, or involvement in terrorism won’t be held for ICE by the city and might, if they can somehow make bail, be free as birds with the feds none the wiser.

That this is immensely popular with local Democrats and the minority voters that made Kenney the first white mayor of Philly since Ed Rendell left office in January 1999 almost goes without saying. That’s the political rationale of sanctuary cities anywhere in the country. But it also explains efforts to forge bipartisan majorities to enact badly needed reforms to a broken immigration system are impossible for the foreseeable future. Liberals also shouldn’t be confused into thinking what works in Philadelphia will necessarily put another Democrat in the White House this November.

While Kenney’s order makes local political sense, even the citizens of ultra-liberal Philadelphia ought to be shocked by the implications of what he has done. The reinstated rule could easily replicate the circumstances under which the city of San Francisco released Francisco Sanchez, an illegal immigrant from Mexico, who had been previously deported five times, from custody despite an ICE hold being placed on him. After being freed last April, Sanchez murdered 33-year-old Kate Steinle. Had San Francisco complied with the ICE request, Sanchez couldn’t have committed the crime.

That tragic incident sparked national outrage about sanctuary cities and prompted Congressional Republicans to attempt to pass “Kate’s Law,” which would have imposed a mandatory minimum jail sentence on deported felons who return to the U.S. and would end federal law enforcement funding to cities that have sanctuary city rules. But the bill died in the Senate due to Democratic opposition. At the time, Senate Minority Leader Harry Reid referred to Kate’s Law as just “another attack on the immigrant community” by the GOP.

President Obama justified his decision to grant effective amnesty to up to five million illegal immigrants by saying that Congressional Republicans had shirked their duty by refusing to pass a comprehensive immigration reform package. But his move, which has been put on hold by successful court challenges, as well as sanctuary city measures such as the one now back in force in Philadelphia, illustrates the complete breakdown in trust that Democrats are willing to support the rule of law in this country.

Since their poor performance among minority voters in the 2012 election, Republicans have been chided for their refusal to budge on their opposition to a path to citizenship for illegal immigrants. Polls have consistently shown that a majority of Americans want some sort of rational resolution to the impasse on immigration and understand that rhetoric about deporting 11 million illegals is as unrealistic as promises that Mexico will pay for a wall along the Rio Grande. There is also some truth to analyses that assert a tough stand on immigration more or less guarantees that the growing numbers of Hispanic voters are becoming as wedded to the Democrats as African-Americans. But as troubling as that development should be for the GOP, it remains to be seen whether Obama’s successors will truly be able to remain a national party if Democrats become wedded to irrational sanctuary city rules such as the one in Philadelphia.

Democrats have lost ground throughout the country on the local, state, and Congressional levels during Barack Obama’s seven years in office. They retain control only in those deep blue areas like Philadelphia, where liberals and minority voters predominate. That gives them a built-in advantage in the Electoral College, but one that is vulnerable to even slight shifts in large swing states. Put simply, Democrats can hold the presidency if they nominate hugely popular candidates like Obama that can turn out minority voters in record numbers or ones that can appeal to independents like Bill Clinton. But barring the unlikely emergence of another Obama, they cannot prevail as a sanctuary city party.

Though the media and political elites scoff at the popularity of anti-illegal immigration rhetoric heard in the GOP presidential race, Democrats should worry about what happened this week in Philadelphia. What makes political sense for a mayor seeking minority support in a one-party town as complacently corrupt and insensible to the need for reform as Philadelphia is not smart policy for a political party that is losing the political center. Anger about sanctuary cities isn’t just a Fox News stunt. It presents a clear and present danger to Democratic hopes for retaining the White House or ever winning back control of Congress. 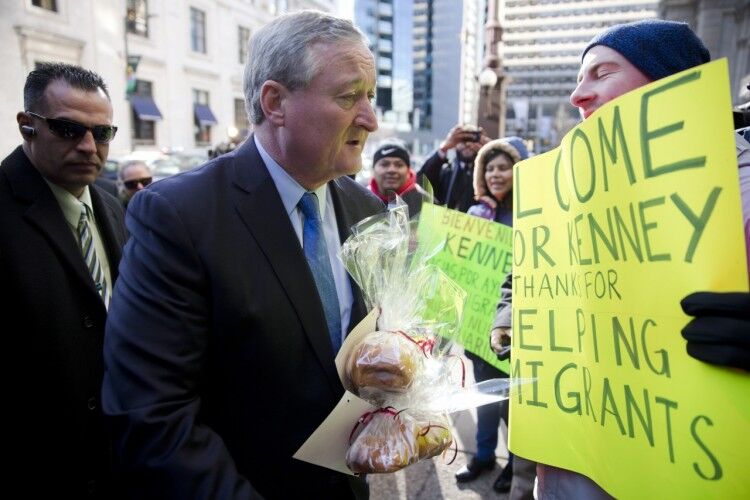