After 11 Republican presidential debates, you’d think we’d understand the dynamic of the race. Time and again, Donald Trump has been exposed in these forums as lacking substantial answers on policy questions as well as being called out for lying, flip-flopping, and out-and-out fraud. Yet somehow none of it has mattered. His fans remain loyal to him no matter what he says or does. Indeed, as we learned months ago, the more outrageous he is, the more he insults and demeans anyone who dares to challenge him, and the more inconsistent his stands, the more his supporters seem to like it.

The debate broadcast on Fox Thursday night from Detroit was in some ways a continuation of last week’s CNN debate in which Marco Rubio and Ted Cruz double-teamed the frontrunner and hammered him non-stop on the issues. But in this debate, it got worse for Trump as the Fox News moderators also attempted to hold the frontrunner accountable and what followed was not pretty to watch for Trump fans.

Chris Wallace not only asked Trump about his claims about being able to make his budget figures add up, he supplied graphics that illustrated that the candidate’s claims were sheer fiction since the entire budgets of the departments he wanted trim didn’t amount to a fraction of what he said he’d save.

If that wasn’t bad enough, Trump’s old sparring partner Megyn Kelly returned to the fray and supplied a video montage of Trump flip-flopping on the war in Afghanistan, admitting Syrian refugees and claiming George W. Bush lied on Iraq. Even worse, she piled onto Rubio’s attacks about the fraud charges against Trump University by pointing out that, contrary to Trump’s claims, it had been given a D-minus rating by the Better Business Bureau and that a judge that made a preliminary ruling on the civil case against him compared the real estate mogul’s behavior to that of epic fraudster Bernard Madoff.

To all of this, as well as to more substantial questions about policy, Trump replied with his usual antics, calling Rubio and Cruz names and boasting of his poll ratings. He blustered, talked over his opponents and made excuses about his clothing being manufactured abroad, his “flexibility” on key issues” and lied one more time about being confused about the question CNN’s Jake Tapper posed to him about disavowing the Ku Klux Klan and David Duke. He also boasted of the size of his manhood and completely contradicted himself on a key immigration policy after a commercial break.

It must be conceded that Trump had one strong moment. It’s likely that a lot of GOP voters like his bravado that no U.S. soldiers will dare refuse his illegal orders to commit war crimes against terrorists. Whether that will play as well in a general election remains to be seen.

But that aside, it meant that even more than in previous debates, Trump was exposed, and his deceptions were laid bare for all to see. Yet that leads us to ask two questions.

One is whether this helps any of the other candidates?

The other is whether voters will care enough about the facts about Trump to let his debunking influence their opinions.

The answer to the first question is a mixed bag.

Ted Cruz had his best debate. He was relentless in hammering Trump on his departures from conservative principles or any principles at all. He was very much on point as the Texas senator connected the dots between Trump’s lack of ethics and his inconsistent and often liberal stands on the issues and the very anger at government, that has helped lift him to the top of the polls. He was right when he said that Trump was the ultimate crony capitalist and insider and for 40 years had represented everything that restive GOP voters were rebelling against. He was also able to attack Trump without quite getting into the mud with him. Cruz was also brilliant in making the case that liberal failures had created the economic catastrophe that is contemporary Detroit.

Marco Rubio was not so fortunate. Rubio also scored points at Trump’s expense on a number of issues, both substantive and personal. But by engaging in the sort of personal mockery that Trump employs, including juvenile remarks about his hands —that led his target to make what was certainly the most vulgar remark in the history of presidential debates — Rubio was also tarnished by the exchange. On economic and especially foreign policy, the Florida senator gave sterling answers that provided a stark contrast to Trump’s empty sloganeering. But he never quite rose above the pie fight that he felt himself forced to engage in with the frontrunner. Trump may have, had it coming because of his non-stop insults, but playing the same game still diminished Rubio even if it achieved the goal of getting under the Donald’s skin.

On the periphery of all of this was John Kasich. Kasich had a good debate because while Rubio and Cruz did the dirty work of exposing Trump, the Ohio governor was able to pose as the adult on the stage that didn’t want to insult anyone. It was an effective tactic, but it also served no purpose other than to provide Trump with a respite from accountability. Given Kasich’s terrible poll numbers everywhere outside of Ohio, his kid gloves treatment of the frontrunner made it appear that he was running to be Trump’s vice president more than anything else.

But the most important question is whether anyone who was considering voting for Trump would change his or her mind because of what they learned about him. The answer to that is a big maybe. Nothing is likely to persuade Trump fans to abandon him no matter how often his lies are exposed. But contrary to the notion that attacks on Trump failed, late deciders in this week’s Super Tuesday primaries seemed more inclined to back Rubio after his skewering of Trump in last week’s debate. It’s possible that another evening of truth about Trump will, at the very least, keep Trump to the approximate 35 percent of Republican primary and caucus voters that have chosen him up until now.

Will that be enough to prevent him from winning even more states in the next two weeks? Maybe not. But it’s also possible that as we get closer to the point where Trump will have to be considered the likely nominee, more voters will sober up and choose one of the alternatives.

If not, this debate ought to serve as a warning to Republicans who have blind faith in Trump’s ability to attract new voters while being impervious to even the most pointed and truthful attacks on his record. Everything Rubio and Cruz (as well as Mitt Romney earlier in the day) said will be repeated endlessly by the Democrats once they get their wish and Trump is the GOP nominee. Trump’s strengths are obvious. But so are his weaknesses, and the Hillary Clinton machine and her media allies will ruthlessly exploit these points. Facts may not matter to Trump’s fans, and he may have enough support to skate through to win the nomination. But this debate was one more warning to Republicans that handing their party over to Trump is guaranteeing Clinton the presidency. 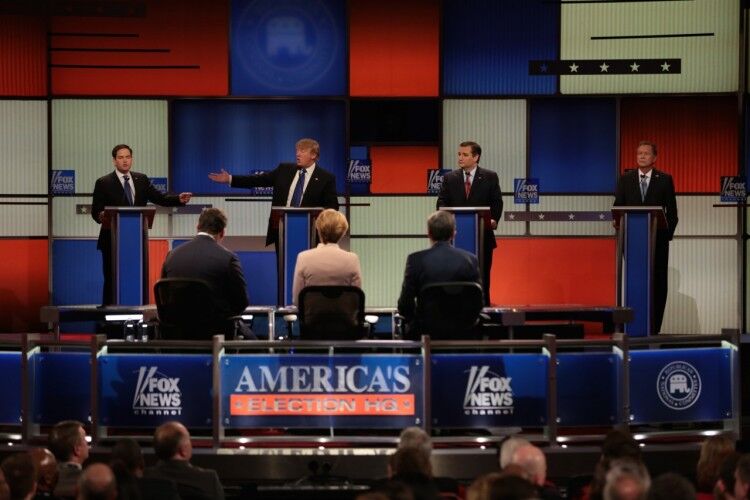