On Monday afternoon Donald Trump did it again: He made a bizarre, offensive, outlandish suggestion — to bar all Muslims from entering the country. And of course, by Tuesday morning, he was on four different television networks, with anchors breathlessly asking him to spell out the details of his ludicrous proposal: Would he bar Muslim service members from returning home from the wars? (No.) Would he bar Muslim heads of state from visiting? (No.) Would he bar U.S. citizens who happened to be Muslims from coming home? (First yes, then no.)  As if he had put forward a serious policy plan to adjust, say, the rate of capital gains tax — rather than a demagogic, know-nothing appeal designed to capitalize on fear and suspicion, xenophobia, and racism.

There is nothing remotely surprising about the amount of media coverage Trump gets. He has been running his entire campaign, which has taken him to the top of the Republican field, largely on free media. One study finds that he has received more TV coverage than the entire Democratic field, to say nothing of his Republican competitors.

Most reporters abhor Trump and everything he stands for. Yet they remain the instrument by which he is able to elevate himself to the top of the Republican race and to the center of the national conversation.

This phenomenon is dismaying but hardly unprecedented. Joe McCarthy did exactly the same thing. Like Trump, who knows next to nothing of the Middle East, Islam, terrorism, military affairs, or any related field, McCarthy was an ignoramus who knew little of the threat he was purporting to address — in his case, communism. But just as Trump is a master of taking advantage of the war on terror to sow suspicion and hatred of Muslims, so McCarthy took advantage of the Cold War to sow suspicion and hatred of supposed Communist Fifth Columnists — which, in his telling, included such distinguished anti-communists as Secretary of State Dean Acheson and General George C. Marshall. And just as Trump plays the media like a Stradivarius, so, too, did McCarthy.

David Oshinsky’s excellent study of Joe McMcarthy, A Conspiracy So Immense: The World of Joe McCarthy, makes for revealing reading. It’s sometimes hard to know if the author, a historian at the University of Texas, is writing about McCarthy or Trump.

Think Trump is dominating the news today? “McCarthy, and no one else in Congress, ruled America’s front pages for almost five years,” writes Oshinsky.

The reporters who covered McCarthy knew that his charges were baseless — he didn’t actually uncover any Communist agents but he did spread a lot of scurrilous allegations. “My own impression was that Joe was a demagogue,” one newsman remarked. “But what could I do? I had to report — and quote — McCarthy. How do you say in the middle of your story, ‘This is a lie’? The press is supposedly neutral. You write what the man says.”

McCarthy was well aware of the press’s weakness and took full advantage of it. Although he had a public image as a scowling hater, in private he could be charming and friendly — and he was always open to the press. “He was really an ingratiating Irishman,” said one critic. “You knew very well that he was a bum — still, you kind of liked this bum.” No doubt, some of those covering Trump feel the same way, especially because, like McCarthy, he is a “dream story.” “The press flocked to McCarthy because he was bizarre, unpredictable, entertaining, and always newsworthy.” Trump is exactly the same way.

McCarthy, like Trump, also knew how to play hardball. Any reporter who criticized McCarthy was liable to be labeled a “pinko” or “Red” — potent allegations in those days. Any reporter who criticizes Trump or even asks him a tough question is liable to be mocked, often in crude, ugly terms, and labeled “stupid” or a “dummy.” He is particularly scathing on female reporters or, in one case, a reporter with a disability — and he regularly subjects reporters to ridicule before crowds of his rowdy, baying acolytes.

Through positive and negative reinforcement, McCarthy was supremely skilled in creating what Oshinsky calls “a strange and mutually supportive bond” between “author and subject.” Trump does the same thing.

Breaking out of this vicious relationship isn’t easy. It may be impossible. Some newspapers resolved to take McCarthy’s allegations off their front pages, but it was impossible to censor “news.” Likewise, this past summer Huffington Post resolved to cover Trump only in its “entertainment” section. But he hasn’t had any trouble getting more publicity than any other candidate.

Media outlets can’t stop covering Trump, but at the very least they should give him less attention. Producers and anchors on all the TV networks need to ask themselves if they really need to give Trump a platform to spew his bile in exchange for a few ratings points. And if they continue to give him the attention he so desperately covets, then the media need to accept that, just as they were in the days of McCarthyism, today they are part of the problem. 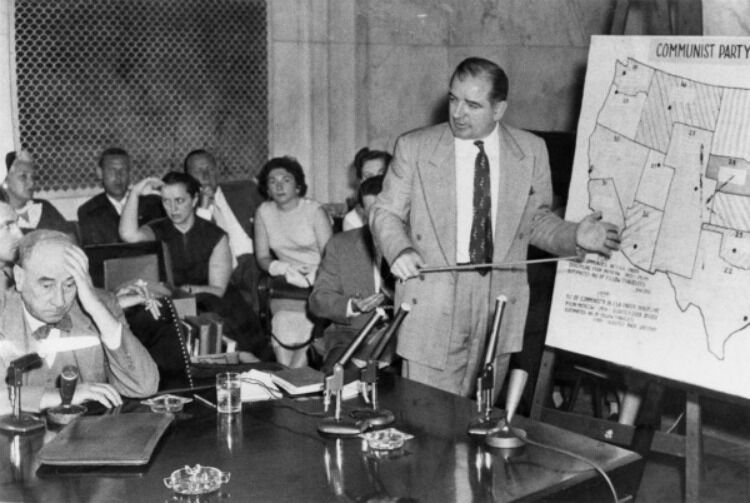