On Wednesday, the Trump administration made a big show of support for a radical immigration bill sponsored by Republican Sens. Tom Cotton and David Perdue. One part of the legislation makes a lot of sense. The other doesn’t.

The part that is sensible would transition America’s immigration system from favoring family reunification to favoring a skills-based test for entry. That is the model that Canada uses and it has worked very well in boosting that country’s population and economy. As Jonathan Tepperman, the managing editor of Foreign Affairs (and a Canadian expatriate), pointed out, while immigrants are a boost to America, they are an even bigger boost to Canada. “About half of all Canadian immigrants arrive with a college degree, while the figure in the United States is just 27 percent,” he wrote. “Immigrant children in Canadian schools read at the same level as the native born, while the gap is huge in the United States. Canadian immigrants are almost 20 percent more likely to own their own homes and 7 percent less likely to live in poverty than their American equivalents.”

If all that the Cotton-Purdue bill did was to adopt the Canadian model for the U.S., it would be a cause for celebration. But along with this sensible revision of the 1965 Immigration and Naturalization Act, it also includes a plan to reduce overall immigration by half within a decade. It would stop 85 percent of family-based arrivals while keeping constant, at roughly 140,000 per year, the number of immigrants allowed in based on job skills.

This makes no sense. As James Pethokoukis of the American Enterprise Institute argued, the U.S. economy would benefit from more, not less, immigration, as long as it’s skills-based. Younger, harder-working immigrants are, in fact, essential to prevent a demographic implosion, similar to those now occurring in Europe, China, Japan, South Korea and other countries, where an ever-shrinking workforce cannot support an ever-growing number of Baby Boomer retirees.

A survey of economists found that 89 percent agree or strongly agree that “the average US citizen would be better off if a larger number of highly educated foreign workers were legally allowed to immigrate to the US each year.” As Pethokoukis noted, “immigrant scientists and entrepreneurs play a disproportionate role in driving the technological advances that power productivity growth in the United States.” He writes that “roughly half of U.S.-based unicorns—technology start-ups worth at least $1 billion—were founded by immigrants, with India the top nation of origin.”

What about claims that more immigration hurts lower-income Americans? That was the case advanced at the White House by Stephen Miller, a nativist who previously worked for then-Senator Jeff Sessions and now for President Trump. Miller was one of the driving forces behind the ill-conceived ban on arrivals from seven Muslim nations that caused chaos at the nation’s airports in January. Now he is pushing for a massive, 50 percent reduction in immigration. When pressed by Glenn Thrush of the New York Times to cite evidence in support of his contention that immigration hurts the working class, African-Americans and Latinos in particular, Miller fell back on discredited studies claiming that newcomers exacerbate income inequality.

In fact, as Philip Bump observed in the Washington Post, the effects of immigration on income inequality are “modest.” A recent study by the National Academies of Sciences, Engineering, and Medicine found that immigrants aren’t taking American jobs, save for those held by teenagers who don’t finish high school. By contrast, this comprehensive study found that high-skill immigrants spur innovation and boost the overall economy.

And while justifying these cutbacks on economic grounds, it’s hard not to suspect that their agenda is actually cultural and ethnic. There are some in Stephen Miller’s camp who are eager to reverse what they see as dangerous demographic trends. They should expound their xenophobic agenda more honestly rather than hiding behind specious economic claims.

The hypocrisy is all the more astounding, given that President Trump is once again bringing in foreign guest-workers to staff Mar-a-Lago and Jared Kushner’s family company is being investigated for selling visas to wealthy Chinese. The White House message seems to be that foreign workers are good for the Trump family’s business—but not for the country as a whole. 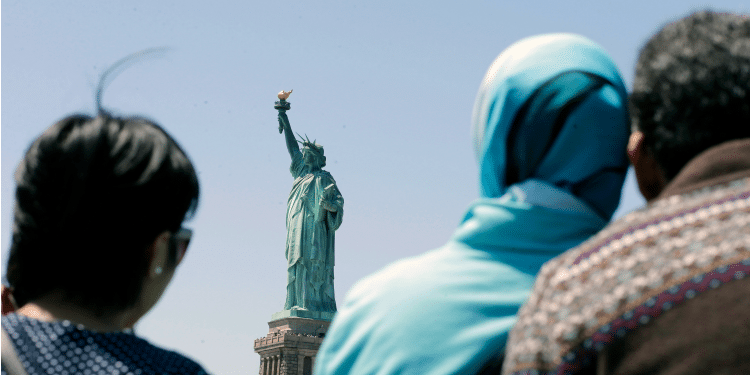