Some thoughts on President Barack Obama’s final State of the Union address. Let’s start with the positive:

– I liked Obama’s message of optimism – that America can handle whatever challenges the future holds: “America has been through big changes before — wars and depression, the influx of immigrants, workers fighting for a fair deal, and movements to expand civil rights. Each time, there have been those who told us to fear the future; who claimed we could slam the brakes on change, promising to restore past glory if we just got some group or idea that was threatening America under control. And each time, we overcame those fears.”

That’s a nice rebuke to the pessimism, verging on doomsaying, that, as Yuval Levin noted in this perceptive article, characterizes three of the major Republican candidates: Donald Trump, Ted Cruz, and Chris Christie. Only Marco Rubio, Levin writes, has been advocating an optimistic vision on the campaign trail.

– Obama was also right to implicitly rebuke Cruz, Trump, Carson, and other GOP candidates for their hate-mongering against Muslims; Trump, of course, being the biggest offender. Obama called on people “to reject any politics that targets people because of race or religion. This isn’t a matter of political correctness. It’s a matter of understanding what makes us strong.” That is a message that George W. Bush delivered as well, but it seems to be forgotten by too many Republicans today who seem to think there is no downside to stigmatizing and alienating Muslims.

There are also a number of statements regarding foreign policy that I didn’t like nearly as well.

– Obama, like Cruz and Trump, made the ritualistic bow toward isolationist sentiment (which is even stronger in the Democratic Party than in the Republican Party) by proclaiming that we need to “keep America safe and lead the world without becoming its policeman.”

If the U.S. doesn’t police the world, as it has done in one form or another for more than a hundred years, who will do the job? China? Russia? Iran? More likely, no one will do it, and the world will become a far more dangerous and poorer place as it was in the 1930s and 1970s, the two decades of American isolationism. Obama and other politicians — this is a favorite trope among both Democrats and Republicans — need to stop trash-talking the idea of policing the globe and start embracing it.

– Obama set up another false dichotomy (a favorite rhetorical gambit of his) when he said that we have “to keep America safe and strong without either isolating ourselves or trying to nation-build everywhere there’s a problem.”

No one – literally no one — advocates nation-building “everywhere.” This is another straw man beloved not only of Obama but also of Ted Cruz, Rand Paul, and others. Yet there is a strong case for nation building in some places, and Obama himself made it when he said: “In today’s world, we’re threatened less by evil empires and more by failing states…  For even without ISIL, instability will continue for decades in many parts of the world — in the Middle East, in Afghanistan and Pakistan, in parts of Central America, Africa and Asia. Some of these places may become safe havens for new terrorist networks; others will fall victim to ethnic conflict, or famine, feeding the next wave of refugees. The world will look to us to help solve these problems, and our answer needs to be more than tough talk or calls to carpet bomb civilians. That may work as a TV sound bite, but it doesn’t pass muster on the world stage.”

Exactly right: We can’t “carpet bomb” our way out of trouble, as Ted Cruz imagines — we have to help embattled allies to build governments strong enough to maintain order. In other words, we have to engage in nation-building, the very thing that Obama disingenuously warns against.

– Obama also warned against the U.S. getting involved in quagmires, “spilling American blood and treasure that ultimately weakens us. It’s the lesson of Vietnam, of Iraq — and we should have learned it by now.”

Fair enough. But Iraq wasn’t a quagmire by 2009, when Obama entered office. It was a success story, as even Joe Biden acknowledged. But Obama threw away that success by pulling troops out. And by not getting involved in ending the Syrian civil war, he has allowed a catastrophe to unfold, with hundreds of thousands dead, millions of refugees, the rise of ISIS, and the empowerment of Russia and Iran. If Vietnam and Iraq 2003-2007 show the downsides of American intervention, Syria and Iraq post-2011 show the downside of American non-intervention.

– Obama’s claims of success against ISIS aren’t very convincing. “For more than a year,” he said, “America has led a coalition of more than 60 countries to cut off ISIL’s financing, disrupt their plots, stop the flow of terrorist fighters, and stamp out their vicious ideology. With nearly 10,000 air strikes, we are taking out their leadership, their oil, their training camps, and their weapons. We are training, arming, and supporting forces who are steadily reclaiming territory in Iraq and Syria.”

Yet so far ISIS has lost only about 14 percent of its territory, and while it has seen the loss of some captured territory in Iraq, it maintains its grip over Mosul, Fallujah, and almost all of its Syrian territory. Obama must be the only person in the world, other than John Kerry, who sees American success in “leading international efforts to help that broken society (Syria) pursue a lasting peace.” In reality Syria remains a basket case and the international efforts taking place in de luxe locales such as Geneva and Vienna are utterly irrelevant where they are not positively harmful (by conferring international legitimacy on Russia, Iran, and Assad).

– Likewise, Obama’s boast of success against Iran rang hollow: “As we speak, Iran has rolled back its nuclear program, shipped out its uranium stockpile, and the world has avoided another war.”

It may well be the case that we have avoided a war with Iran, or at least a bombing strike, but at what cost? The deal will expire in 10-15 years, leaving Iran a nuclear threshold state. In the meantime, Iran is about to get a $100 billion-plus windfall that will fund its power grab across the Middle East. And Iran is happy to rub our noses in it, as seen by their firing missiles near an American aircraft carrier and holding Americans hostage. It’s a good thing they released 10 American sailors held overnight, but the Iranian Revolutionary Guard Corps felt compelled to release a picture of the Americans on their knees, their hands on their heads, in a symbolic posture of submission. That tells a lot about the image they are able to beam to the world at America’s expense.

– Obama called on Congress to “finally authorize the use of military force against ISIL.” He’s right that Congress should act, but it won’t, because the resolution he sent forward is a non-starter with Republicans. And for good reason: It actually limits the president’s authority to fight the evil of ISIS — for example, by prohibiting “enduring offensive ground combat operations.” Obama needs to get together with congressional leaders to pass a more wide-reaching resolution instead of banging away on his wording, which is DOA.

– Obama repeated yet again his call “to shut down the prison at Guantanamo: it’s expensive, it’s unnecessary, and it only serves as a recruitment brochure for our enemies.” As Michael Doran of the Hudson Institute pointed out, this is pretty rich from a president who has amped up drone strikes to new heights. By what logic does Obama imagine that Gitmo serves as a recruiting tool for our enemies and drone strikes don’t?

On balance, it was a better State of the Union than most because it did not include a laundry list of proposals. Mercifully, in his final year of office, Obama seems to have ratcheted back his ambitions. But it is obvious that he will never be cured of some of his most annoying rhetorical tics, such as his continual need to present himself as the voice of reason arrayed against extreme positions that no one really holds. 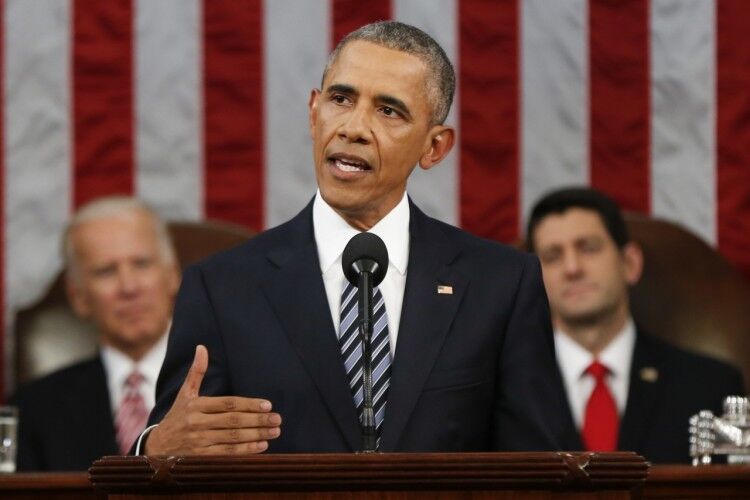